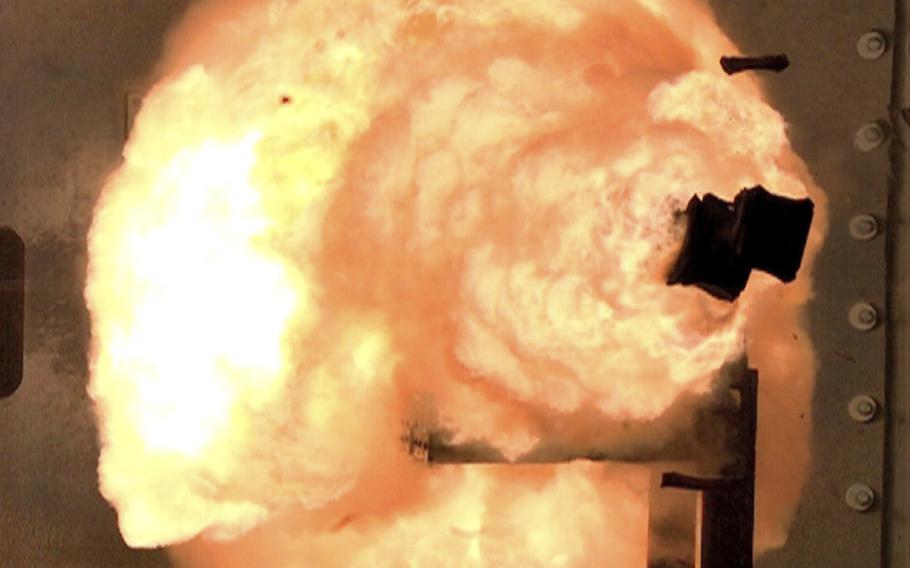 In this Feb. 24, 2012 photo provided by the U.S. Navy, a high-speed camera captures the first full-energy shots from an electromagnetic launcher at a test facility in Dahlgren, Va. (John F. Williams/U.S. Navy)

In this Feb. 24, 2012 photo provided by the U.S. Navy, a high-speed camera captures the first full-energy shots from an electromagnetic launcher at a test facility in Dahlgren, Va. (John F. Williams/U.S. Navy) 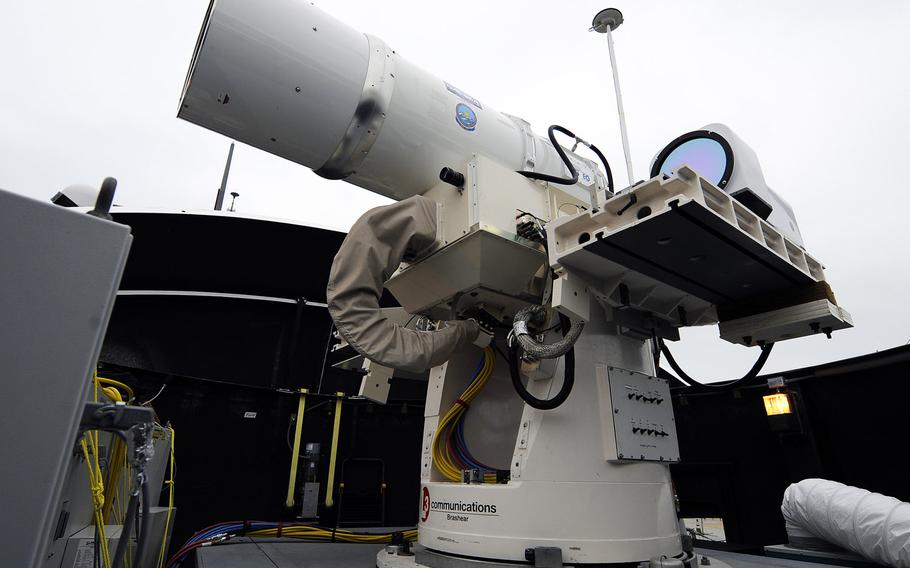 In this July 30, 2012 photo provided by the U.S. Navy, a laser weapon sits temporarily installed aboard the guided-missile destroyer USS Dewey in San Diego. The Navy plans to deploy its first laser on a ship in 2014, and intends to test an electromagnetic rail gun prototype aboard a vessel within the following two years. (John F. Williams/U.S. Navy) 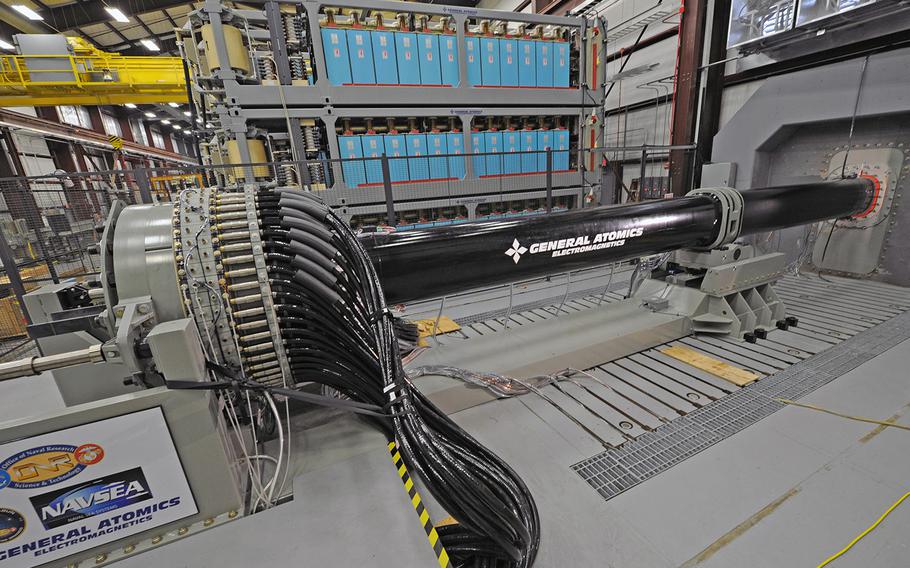 WASHINGTON — The Navy is building a new gun that can strike enemy targets over 100 miles away with the force of a high-speed freight train slamming through a wall, according to service officials who are working on this ‘Star Wars’ weapon.

“Over the last two years, truly the Navy and Marine Corps have been developing some hugely impressive, I call them Star Wars-like weapon systems,” Rear Adm. Matthew Klunder, the chief of naval research, told reporters during a news briefing about the Navy’s Electromagnetic Railgun, which is currently under development.

Unlike the guns currently mounted on Navy surface vessels, which use gun powder and magazines in their launch systems, the railgun uses batteries and a pulse forming network to launch its projectiles, according to Rear Adm. Bryant Fuller, the chief engineer at Naval Sea Systems Command. The railgun system uses an electromagnetic force — known as the Lorentz Force — to rapidly accelerate and launch a projectile between two conductive rails, according to Naval Sea Systems Command. The weapon is more capable than similar-purpose systems in service because conventional powder projectiles can’t produce as much energy, Fuller said.

The railgun’s projectiles have a range of 110 nautical miles — 20 nautical miles greater than the maximum range of the Navy’s primary air defense missiles — and travel at seven times the speed of sound, according to the Navy.

The system can sometimes offer more bang for the buck as well. Operating the railgun against certain types of threats costs only a fraction of the cost of using existing systems, according to Klunder and Naval Sea Systems command. Klunder said each railgun shot costs about $25,000. In contrast, firing a Tomahawk cruise missile costs $1.4 million (although Tomahawks have a much longer range).

The railgun’s projectiles weigh only 23 pounds, but derive much of their lethality from their speed.

“It’s not a large projective, but when it’s going Mach 7, it doesn’t have to be,” Klunder said. “It’s pretty much like a freight train going through a wall … at over 100 mph. [It has] that kind of energy.”

Officials expect the railgun to fire 10 rounds per minute once the technology is fully mature.

“I can put hundreds of these on a ship [and your arsenal] never runs out. You just keep shooting,” Klunder said.

The officials identified improving the power supply and preventing the gun from overheating after firing multiple rounds in succession as key challenges that must be overcome before the weapon can be integrated into the fleet. They said they’ve made “huge advances” when it comes to high-energy density batteries and capacitors, and parts of the railgun are made of special materials that prevent them from wearing out as quickly when exposed to high levels of energy. They’re also working on enhancing the cooling systems. They wouldn’t go into more detail about how any of those sensitive technologies work.

“There’s nothing new that the sailors will have to learn as far as that goes,” Fuller said.

The main purpose of the system would be to protect surface ships from enemy aircraft, low-flying cruise missiles, and ballistic missiles.

“It gives us the ability to basically knock anything out of the air,” according to Klunder.

These railgun development efforts come at a time when the Pentagon has been warning about China’s aggressive pursuit of anti-ship weapons, including a variety of missiles, which could inhibit the Navy’s ability to operate in contested areas in the Asia-Pacific.

The railgun also has long-range strike capabilities, according to Klunder.

“We did lethality models on every single mission that we have in the Marine Corps and the Navy. And I will tell you that this could damage, and be lethal, in every occasion,” Klunder said.

Klunder believes the system’s advanced capabilities will deter potential adversaries from taking on the U.S. Navy.

“I really think it will give our adversaries a huge moment of pause to go, do I even want to go engage our naval ship or our country, because you’re going to lose,” he said. “You could throw anything at us, frankly. And the fact that we now can shoot a number of these rounds at a very affordable cost, it’s my opinion that [our enemies] don’t win [the battle].”

The railgun might eventually be used by the other services as well. After seeing the early performance results, the Pentagon has expressed interest in potentially acquiring the system for the Army for missile defense or other missions at some point in the future, according to Klunder.

The railgun will be tested at sea for the first time in 2016, and the Navy hopes to begin integrating the weapons into the fleet after a second, more complex round of at-sea trials are conducted in 2018, Fuller said.

A final decision has not been made on which ship classes will receive a fully operational railgun because further testing needs to be conducted to understand the ship modifications that would be needed to incorporate the new systems, according to the Navy.

Klunder said they could eventually go on “a number of our classes of ships.”

The gun has already been fired hundreds of times on land at the Naval Surface Warfare Center in Dahlgren, Va., and has gotten “tremendous results,” according to Klunder.

“It’s something that is viable. The technology is there,” Klunder said.

The railgun will go on static display aboard the USNS Millinocket in San Diego this summer, and the public will be able to view it.

“We think it might be the right time for [the American people] to know what we’ve been doing behind closed doors in a ‘Star Wars’ fashion. It’s now a reality and it’s not science fiction. It’s actually real. You can look at it,” Klunder said.

“If you think about what the future is and what it is for this country [and] our national security, we think this is part of it,” he said.