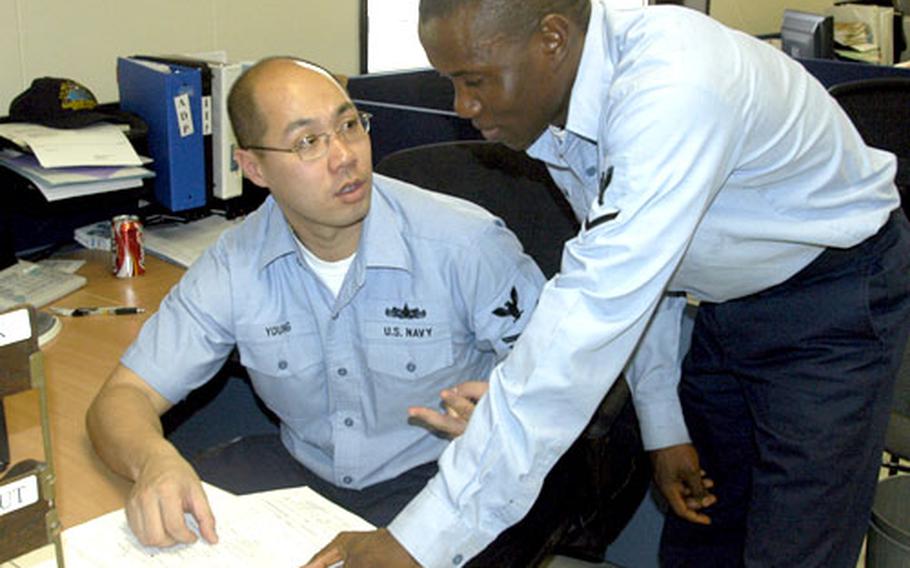 Petty Officer 2nd Class Gabriel Young, seated, talks with Petty Officer 3rd Class Joseph Kpulun at the Naval Support Activity Personnel Support Detachment in Naples, Italy. Both work in the customer service section as personnel specialists, but, until a recent rating merger, they had different jobs. Young used to be a personnelman and Kpulun used to be a disbursing clerk. The ratings were combined in October. (Jason Chudy / S&S)

About 13,000 sailors in a variety of job specialties &#8212; from draftsman to dental technician &#8212; have recently had, or soon will have, to change their ratings.

Navy job specialties are known as ratings, and sailors use these ratings, along with a rank designator, to identify themselves in everything from correspondence to conversation. For example, a petty officer first class boatswain&#8217;s mate might be referred to as a BM1.

The Navy recently changed ratings for about 2,800 sailors alone when they merged dental technicians into the hospital corpsman rating.

The changes were brought on, officials say, because many of the sailors in those ratings have common job characteristics.

Kramer, an enlisted community manager for cryptologic technicians, said Navy leaders are always looking at ways to save money and reduce redundancies between ratings.

But while some sailors are being absorbed into existing ratings, others with unique job specialties are being given their own ratings. Navy divers and explosive ordnance disposal technicians, which were separate specialties under a number of different shipboard or aviation ratings, will now become their own specialized ratings.

Now, with one rating, all divers and EOD technicians will be competing against each other in their respective ratings.

The EOD and Navy diver ratings will both officially be established on June 1, and a mass communication specialist rating beginning July 1. While the diver and EOD ratings will take people from existing ratings, those becoming mass communication specialists will be taken from four different ratings &#8212; journalist, photographer&#8217;s mate, draftsman and lithographer.

While the Navy touts a commonality in functions between the jobs, it&#8217;s sometimes a tough road for those involved.

Chief Petty Officer Scott George of the Naples, Italy-based Naval Computer and Telecommunications Area Master Station Europe Central was part of the merging of ocean systems technicians and sonar technicians in the mid- to late-1990s.

On paper, each rating hunted submarines for a living, but George said the change meant a large learning curve for both communities.

George has since changed ratings again, this time voluntarily, to information systems technician.

But rating mergers haven&#8217;t been difficult for all.

Petty Officer 2nd Class Gabriel Young, a personnel specialist with Personnel Support Detachment Naples, came from independent duty in Washington, D.C., where he did work as both a disbursing clerk &#8212; his rating at the time &#8212; and that of a personnelman.

The Navy merged the personnelman and disbursing clerk ratings on Oct. 1, 2005.

Also, scheduled to merge or change is cryptologic technician (communications) into information systems technician, beginning March 1, with about 1,415 CTOs to become ITs.

Other administrative ratings are also being considered for merger, Kramer said, but no details have been finalized. Also being looked at is the possibility of merging specific engineering ratings into broader ratings.