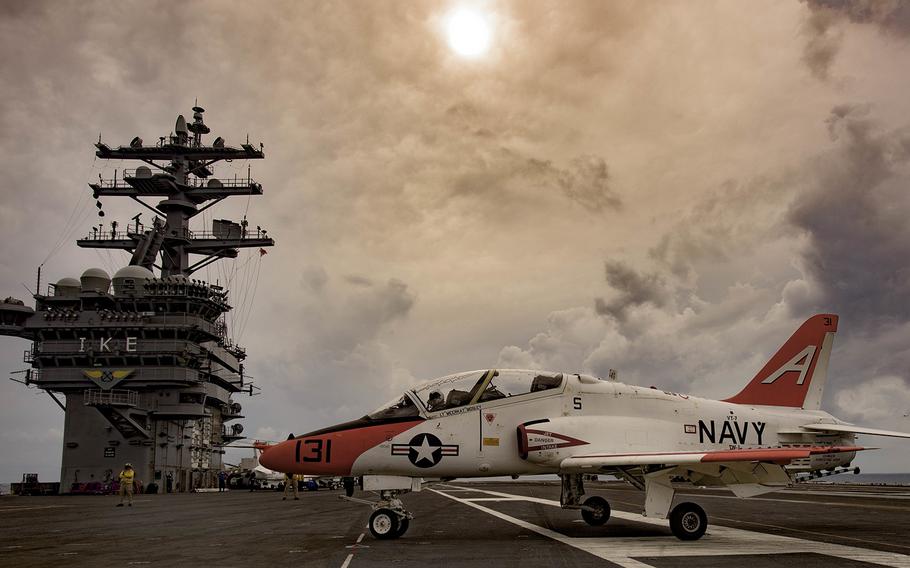 WASHINGTON — The Navy can’t uncover what is poisoning its student pilots in the cockpits of their T-45 trainer jets, despite stripping aircraft apart piece by piece, the top admiral for naval aviation told Senate lawmakers Tuesday.

“We are not doing well on the diagnosis,” Vice Adm. Paul Grosklags, commander of Naval Air Systems, told the Senate Armed Services subcommittee on seapower. “It would be far easier if we could find out what the root cause was and go after correcting the root cause. To date we have found no smoking guns.”

The Navy grounded all 197 of its training jets in early April after instructor pilots at the Navy’s three primary flight schools in Kingsville, Texas; Pensacola, Fla., and Meridian, Miss., brought attention to the issue by refusing to allow students to fly the planes. No students have flown since then.

So far, about 75 future Navy and Marine Corps pilots have lost training and been delayed in joining their next squadrons. The grounding of student pilots will remain in effect until additional safety measures are put in place, Grosklags said.

Instructor pilots are allowed to fly, but only in scenarios that allow them to breathe without a mask – meaning at altitudes below 2,000 feet and with restricted movements to keep gravitational pressures on them low enough so they won’t need oxygen.

Prior to the grounding, the students were experiencing repeat incidents of disorientation or worse due to failures in the on-board oxygen generation systems, or OBOGS as they are commonly known.

Failures in the oxygen system lead to incidents of hypoxia — when a person doesn’t get enough oxygen to his or her bodily tissues. Hypoxia can result in loss of consciousness or even death.

With the T-45s, Grosklags said the Navy has been able to determine the issue is with the oxygen mixture that pilots are breathing, not the amount of oxygen that is being delivered to them.

“For T-45s specifically, most of our issues to date – almost all of them – have been associated with what we’ll call breathing gas issues,” Grosklags told the subcommittee.

Grosklags said the Navy took several of the affected aircraft from Texas and transported them to its testing and evaluation facility at Naval Air Station Patuxent River in Maryland to examine each part.

“We have torn some of them apart to the extent that we took every component, every single component in that gas path, that breathing gas path, out of the airplane starting with the engine and moving through the entire system. Inspecting all the piping in between all the way up to the mask that the aircrews wear,” he said.

In addition, the Navy has subjected those parts to “extreme testing” and taken some of the other aircraft that were affected and flown them to test for problems.

“We still have not been able to find what we would consider a proximate cause, contamination or something being released into the gas path,” Grosklags said.

The Navy’s F/A-18s have also reported oxygen system failures. Unlike the T-45s, the F/A-18s problems seem to involve pressure on the oxygen being released into a pilot’s mask rather than the mixture of oxygen.