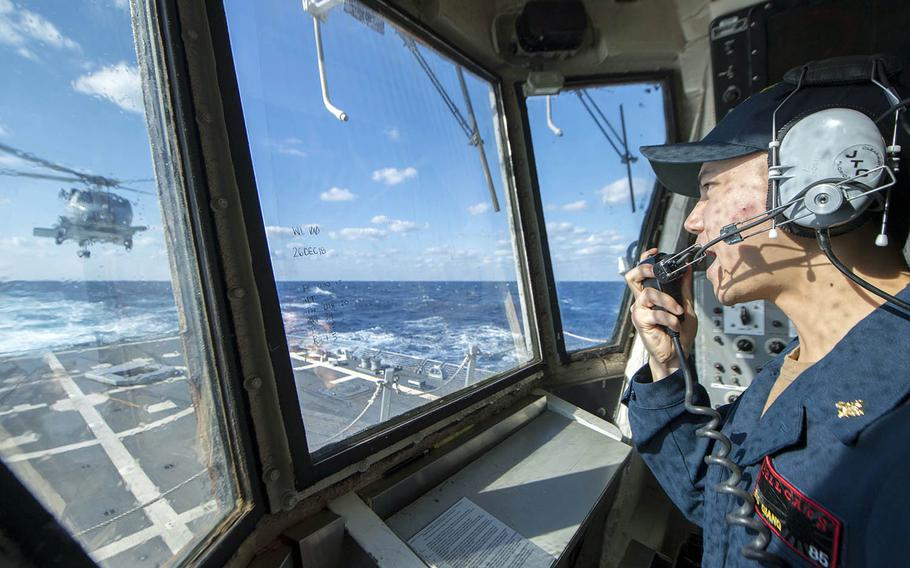 The exercise was meant to “challenge excessive maritime claims and preserve access to the waterways as governed by international law,” 7th Fleet spokesman Cmdr. Clay Doss told Stars and Stripes in an email Tuesday.

The Chinese military sent aircraft and a ship “to conduct verification and identification on the US ship” in response to the McCampbell’s patrol and “warned it to leave,” Beijing’s Foreign Ministry spokesman Lu Kang told reporters Monday, according to an official English translation of the press conference transcript published by the Defense Ministry.

“The Chinese side firmly opposes the relevant action by the U.S. side and urges the U.S. to immediately stop such provocations,” he said. “We will continue to take necessary measures to safeguard our national sovereignty and security.”

“We conduct routine and regular Freedom of Navigation Operations, as we have done in the past and will continue to in the future,” he said in the email. “FONOPs are not about any one country, nor are they about making political statements.”

In recent months, Chinese military experts have been calling for the country’s navy to take aggressive actions against the U.S. in retaliation for crossing into waters claimed by China without its permission.

Australia’s news.com reported Jan. 2 that the deputy head of the Chinese Academy of Military Sciences and Chinese navy, Rear Adm. Lou Yuan, told an audience at the 2018 Military Industry List summit in Shenzhen in December that China could end the patrols by sinking two American aircraft carriers.

In his speech, Lou boasted that China has new anti-ship ballistic and cruise missiles that have the power to take down the U.S.’s behemoth aircraft carriers, according to news.com. The U.S. has one forward-deployed aircraft carrier, the USS Ronald Reagan, which is homeported in Japan. Several other carriers routinely patrol the Pacific, including the USS Carl Vinson and USS Theodore Roosevelt.

“What the United States fears the most is taking casualties,” Lou said, while noting that destroying two carriers could kill thousands of sailors, according to the Australian news agency. “We’ll see how frightened America is.”

Lou’s comments came a few weeks after Dai Xu, president of China’s Institute of Marine Safety and Cooperation, on Dec. 8 called for the Chinese navy to “ram” the next U.S. ship to “break into Chinese waters again,” according to a report by the state-run Global Times newspaper.

In September, the U.S. criticized the Chinese military for what officials called an “unsafe and unprofessional” move by sailing within 45 yards of the USS Decatur as the guided-missile destroyer conducted a freedom-of-navigation patrol through the Chinese-claimed Spratly Islands, also in the South China Sea.

The USS Chancellorsville was the last U.S. vessel to patrol the Paracels. On Nov. 26, the guided-missile cruiser sailed around the contested islands, but the Navy reported that the Chinese military took no unsafe actions in its response to the patrol.