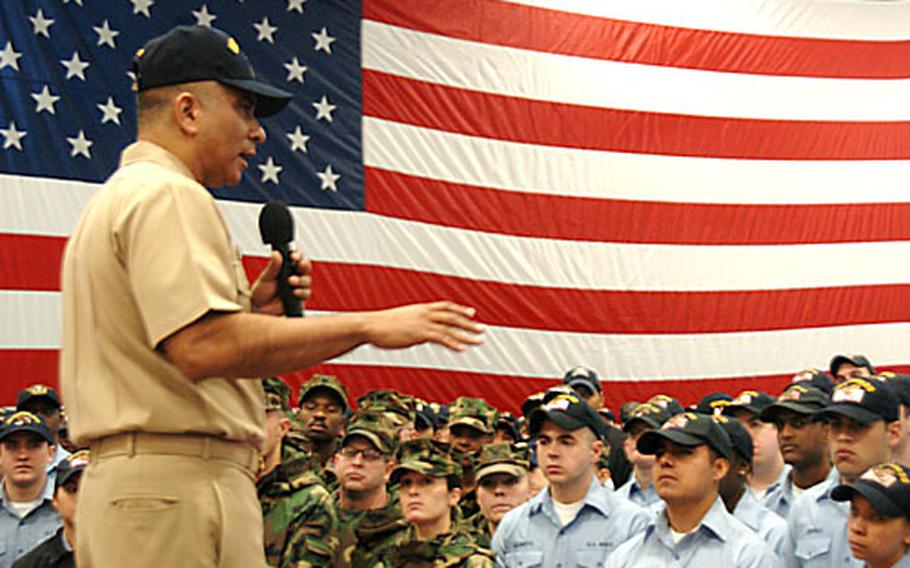 Master Chief Petty Officer of the Navy Joe R. Campa Jr. talks to sailors about leadership in the hanger bay of the USS Kitty Hawk on Thursday at Yokosuka Naval Base, Japan. (Christopher B. Stoltz / S&S)

A delayed flight prevented a duty call to Misawa, but Stars and Stripes was able to catch up with Master Chief Petty Officer of the Navy Joe R. Campa Jr. at Yokosuka, where the specter of the sailor being held in the stabbing death of a taxi driver hung in the air.

Overall, Campa said he would be leaving Japan with a good feeling about the quality of leadership in the Pacific and how it is responding to recent problems.

He believes everyone has performed well in the aftermath of the March 19 slaying of the cab driver.

During one all-hands call, Campa said he was asked by a sailor how leadership justifies &#8220;taking away the civil liberties of our sailors&#8221; by imposing liberty restrictions because of the actions of one person.

He mentioned that flaws in the overseas screening process had been brought up to him several times.

Campa admitted it&#8217;s difficult with people coming straight out of the accession pipeline, &#8220;but you do the best you can, and then you create expectations early on of what it means to serve out here.&#8221;

Campa said the vast majority of sailors serving overseas are living up to their expectations, so he doesn&#8217;t think the solution to off-base incidents lies solely within the overseas screening process. Instead, he said, it could be better addressed with a greater emphasis on deck-plate leadership.

Strengthening the Navy&#8217;s existing culture of leadership is a top priority for Campa.

&#8220;The chief has a very well-defined role in our Navy,&#8221; he said. &#8220;The first class petty officer helps strengthen that role up and down the chain of command, and I need them doing that. I need them meeting the full measure of that expectation, because we don&#8217;t have any sailors to spare.&#8221;

Campa said the Navy is evaluating how it trains petty officers, with an emphasis on the middle enlisted ranks.

Leadership is the key, Campa stressed, adding that he didn&#8217;t join the service expecting to be advanced to the rank of master chief petty officer of the Navy.

Tuition assistanceWhen asked why the Navy&#8217;s tuition assistance program pays for 16 semester hours per fiscal year &#8212; the other services provide $4,500 per year &#8212; Campa couched his explanation by describing a college graduation ceremony for enlisted sailors he attended at Naval Air Facility Atsugi.

Campa said the Navy is constantly evaluating the program and cited a recent change that reversed the Navy&#8217;s previous policy of not allowing sailors tuition assistance in their last year of their enlistment.

Physical fitnessDuring each stop on Campa&#8217;s tour, he took time to exercise with local sailors.

The morning of the interview, Campa exercised with the base chief petty officer community.

&#8220;When I am on the road, I look for that motivation to come PT with me, because it helps my personal physical readiness. I think our Navy has come a long way in that respect,&#8221; Campa said. &#8220;We have a PT uniform coming out, and I think that reinforces this culture of fitness that we&#8217;ve been talking about for several years, and it&#8217;s good to see it coming to life.&#8221;

But Campa stressed that you can&#8217;t get fit by talking about it.