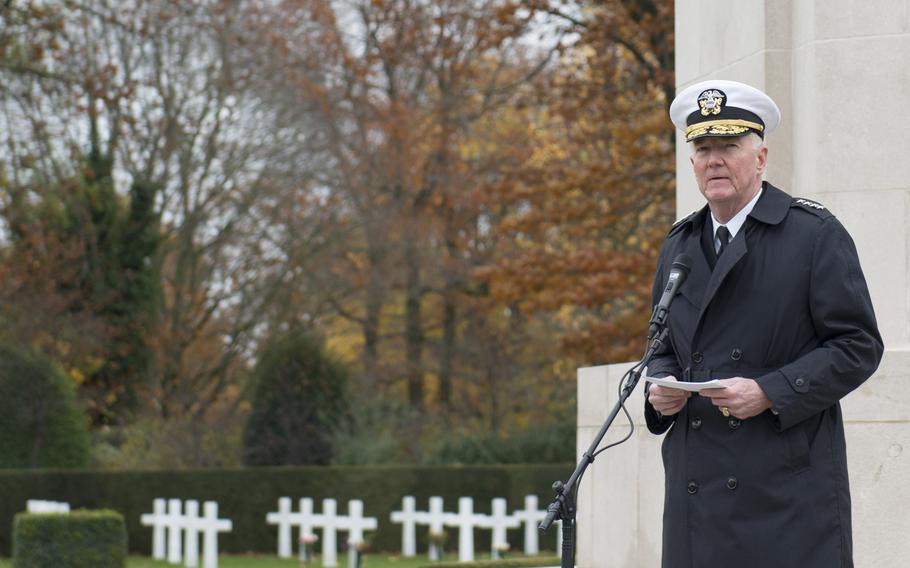 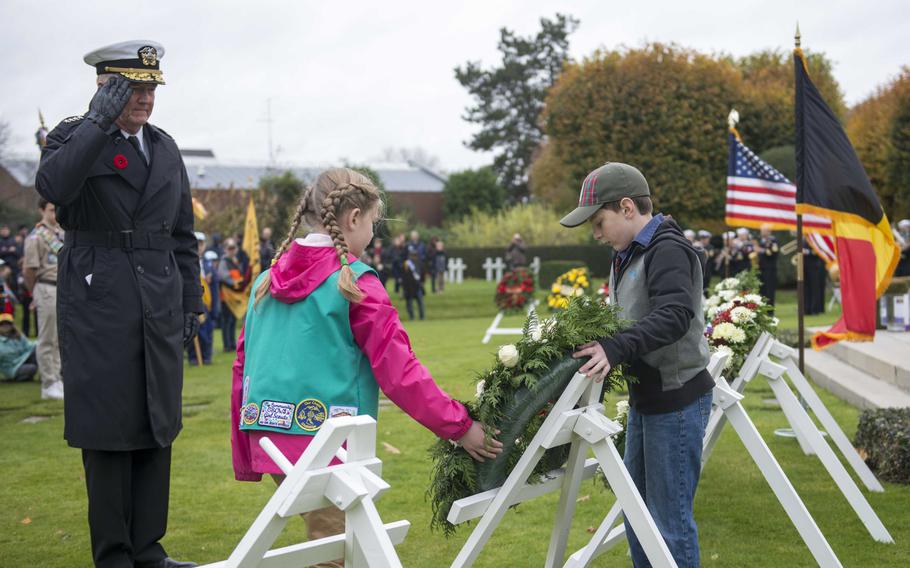 White headstones and a gray sky created a solemn backdrop for Adm. James Foggo as he commemorated the day the Great War’s guns went silent after ravaging much of Europe.

The Navy’s top Europe and Africa commander spoke Sunday at Flanders Field American Cemetery in Belgium in honor of the armistice forged 100 years ago and the thousands of U.S. servicemembers who died in “the war to end all wars.”

“Those who forged victory in World War I reach out in spirit to today’s young patriots who are still fighting for freedom in distant lands, giving of themselves so that others may have a brighter future,” Foggo said.

Foggo noted that 1,043 Americans died on Belgian soil during the war. Of those, 368 lie in Flanders Field, most of them casualties of the Ypres-Lys offensive in the last days of fighting.

Foggo, who also heads Allied Joint Force Command in Naples, Italy, is leading the theater’s naval forces at a time when neighboring Russia has resurged as an aggressive military power.

Although there is little chance of conflict on the devastating scale of a world war, Foggo emphasized the need for Allies to be vigilant and to defend Europe against current threats.

Those who gave their lives in combat as long ago as World War I set an example for future generations in doing what’s necessary to create a durable peace, Foggo said.

“We are honored to call such men and women – past and present – Americans," Foggo said.

“Americans who joined their Allied brothers and sisters to demonstrate unequaled resolve to combat tyranny, and in so doing, inspired the formidable NATO Alliance we maintain today. We are inspired by their service and humbled by their sacrifice."

Foggo talked about his personal connection to the war: Both his grandfathers fought with the Canadian Expeditionary Force several years in the trenches, experiencing the relentless horrors of the world’s first mechanized war.

His grandfather Harold won the Croix de Guerre avec Palme for action at Courcelette. His grandfather James received a battlefield promotion to captain from private after most senior leaders in his battalion were killed. He later was awarded the King George Military Cross at Buckingham Palace.

“We struggle to reconcile the brutality and scale of World War I. Events like today help me, and hopefully help you, place this global atrocity into context,” Foggo said.

About 100 American and Belgian scouts took part in Sunday’s commemoration. One scout read George McCrae’s poem “In Flanders Fields,” which ended the ceremony on a rueful note.

“Take up our quarrel with the foe: To you from failing hands we throw The torch; be yours to hold it high. If ye break faith with us who die We shall not sleep, though poppies grow In Flanders fields."