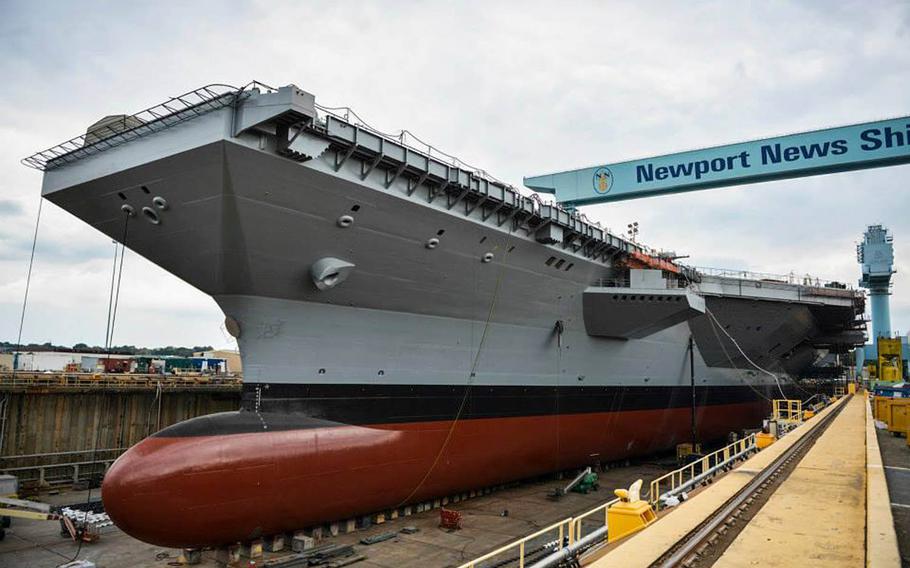 The aircraft carrier USS Gerald R. Ford is seen under construction at the Newport News Shipyard in Newport News, Va., in 2013. The Seapower and Projection Forces subcommittee wants to hike spending on shipbuilding to $20.6 billion, according to a subcommittee markup of the 2017 National Defense Authorization Act released Tuesday, April 19, 2016. (Joshua Wahl/U.S. Navy)

An arm of the House Armed Services Committee wants Reagan-era spending for the Navy, even as the service seeks to shed ships and aircraft amid potential defense budget cuts down the road.

The Seapower and Projection Forces subcommittee wants to hike shipbuilding to $20.6 billion — $2.3 billion more than the Obama administration’s budget request, according to a subcommittee markup of the 2017 National Defense Authorization Act released Tuesday in Washington.

The markup calls for more of everything — from ships to missiles — and faster production of carriers and submarines.

The subcommittee’s recommendations remain far from enactment. The full committee will vote on them well before a House vote and later reconciliation with the Senate’s defense legislation.

“With this legislation, we are rejecting further budget cuts, bending the curve lines, and making a down payment on the 350-ship Navy we need for national defense,” Rep. Randy Forbes, R-Va., said in a statement.

The proposal comes during a year that the final defense budget isn’t threatened by sequestration, a mechanism of across-the-board federal budget cuts, following a bipartisan deal last fall. However, the Defense Department will face $100 billion in cuts from 2018 to 2021 if Congress can’t come to another deal, Defense Secretary Ash Carter told Congress in March.

The subcommittee markup would prevent the Navy from inactivating 11 of its 22 guided-missile cruisers under a “phased modernization plan,” Forbes said. It also prevents the Navy from cutting costs by disbanding one of its 10 carrier air wings.

The Navy is legally mandated to maintain 11 carriers; however, it has only 10 on active duty while work continues on the USS Gerald R. Ford. The USS George Washington is undergoing a multiyear overhaul, with other aging carriers scheduled afterward for similar overhauls and nuclear refueling.

That gives the Navy nine operable carriers, though at any given time, some of those are in port under maintenance.

The markup includes an additional $433 million for a new destroyer, $856 million for an amphibious ship and $385 million for a littoral combat ship, as part of what Forbes labeled the largest shipbuilding funding level since 1988.

The markup also calls for doubling Tomahawk missile production and a report on producing more fast-attack submarines — an area where the Navy faces a 25 percent reduction by the end of the 2020s as Cold War-era subs retire.

A prohibition on retiring the Navy’s mine countermeasure ships, plus unmanned aircraft funding and replacement cargo planes for guard and reserve units further add to the funding total.

Meanwhile, Forbes’ call for a 350-ship Navy goes well beyond the service’s plans.

The Navy’s latest report on its 308-ship, 30-year shipbuilding plan estimates a spending average of about $16.5 billion per year in 2015 dollars, according to a Congressional Research Service report in March.

However, at current procurement and retirement rates, the Navy would likely fall short of the 308-ship goal, according to the report.