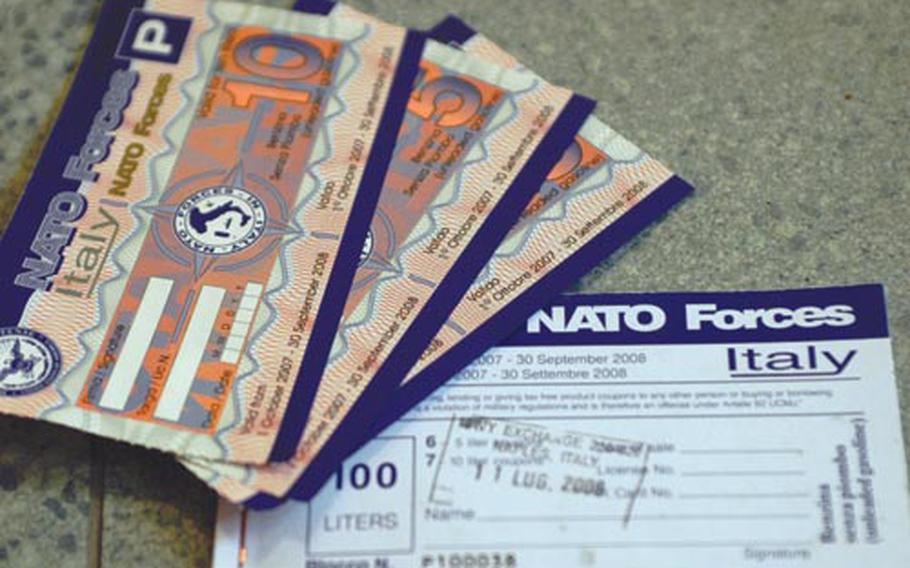 According to a memo obtained by Stars and Stripes, the wholesale price of 100 liters of fuel coupons this month in Italy is $112 for regular gas and $132 for diesel. Customers pay $127 for gas and $150 for diesel. (Sandra Jontz / S&S)

For more than a year, American motorists stationed in Italy grumbled as the rise in gas and diesel prices outpaced increases back in the U.S.

Regular gas in the country is $1.47 more expensive per gallon than it was a year ago while the U.S. average is up $1.06.

Navy officials in Italy blame the meteoric price climb on the dismal dollar-to-euro exchange rate and record oil prices, both of which have played a role in driving up the wholesale cost of gas and diesel. But the Navy&#8217;s pricing method is also part of the reason that price increases in Italy are outpacing the costs of fuel in Germany and the United Kingdom.

In Germany and the U.K., the Army and Air Force Exchange Service sets prices by adding the cost of running the fuel program to the average U.S. price for fuel. But the Navy Exchange &#8212; which runs Italy&#8217;s program &#8212; instead adds up to a 15 percent surcharge to what it pays for fuel.

The Navy&#8217;s method exacerbates price increases by an additional 15 percent while at the same time leading to higher gross profits for NEX. For example, if the wholesale price for a gallon of gas was $1, the Navy would add a 15-cent surcharge. For a $2 gallon of gas, the surcharge would be 30 cents.

With prices now above $4 a gallon, the surcharge is nearly 60 cents a gallon.

Sante Campanile, the exchange&#8217;s district vice president for Europe, contends that the program is a not-for-profit program. The 13.36 percent added on average to the price of gas in 2008 helps cover NEX&#8217;s overhead, he said, and if there is any money left over, it would go toward Morale, Welfare and Recreation programs and to build, renovate and upkeep stores.

While no NEX employees work exclusively on the fuel program, running it is a "major part" of the job done by the exchange&#8217;s information technology, accounting and auditing departments. NEX also has to pay for security and credit card fees out of the gross profit.

According to a memorandum obtained by Stars and Stripes, the wholesale price paid by the Navy-run fuel program for a 100-liter book of regular gas coupons starting July 1 was $112. The program resells the coupons to customers for $127 &#8212; about $4.81 a gallon drawing a gross profit of $15 for every 100 liters, or about 57 cents per gallon.

Even though NEX currently adds $15 to the price of a 100 liter book of gas coupons and $18 to the price of diesel, its gross profit margin going into the second half of July was only 11.81 percent, he said.

"Based on the devaluation of the euro and everything else, if we had applied everything up to the maximum that the Navy Exchange is entitled to &#8212; in other words, if we were being greedy and without a public conscience &#8212; the service fee would be $19.76."

A year ago, when NEX charged $3.33 per gallon, it would have taken in roughly 43 cents gross profit per gallon, about 14 cents less than today.

Whether the cost of running the program has actually increased and is eating up the extra cash being taken in by the program isn&#8217;t known.

"I can&#8217;t give you an exact number on how much it costs to run the program because administrating this program is part of collateral duties of people who manage other quality-of-life programs," Campanile said. "But we&#8217;ve never broken it down and done a P&L (profit and loss statement) exclusively on the gas program."

A profit and loss statement would show how much revenue the program made, how much it cost to run and how much was left over after expenses, and confirm whether it really was operating at cost, as the Navy has contended for years.

Asked whether it is accurate to say that the program is actually break-even, Philip Garcia, a NEX spokesman in the U.S. responded via e-mail, "Our stores and gas stations are doing everything they can to mitigate and/or absorb costs at the expense of gross margin."

He added that higher fuel costs "have led to increased costs on just about everything. These same factors have negatively and significantly impacted profit margins."

However, profits for fuel have increased along with prices, even as the number of gallons sold has decreased, said Eugenio Gialanella, NEX&#8217;s financial manager for Europe.