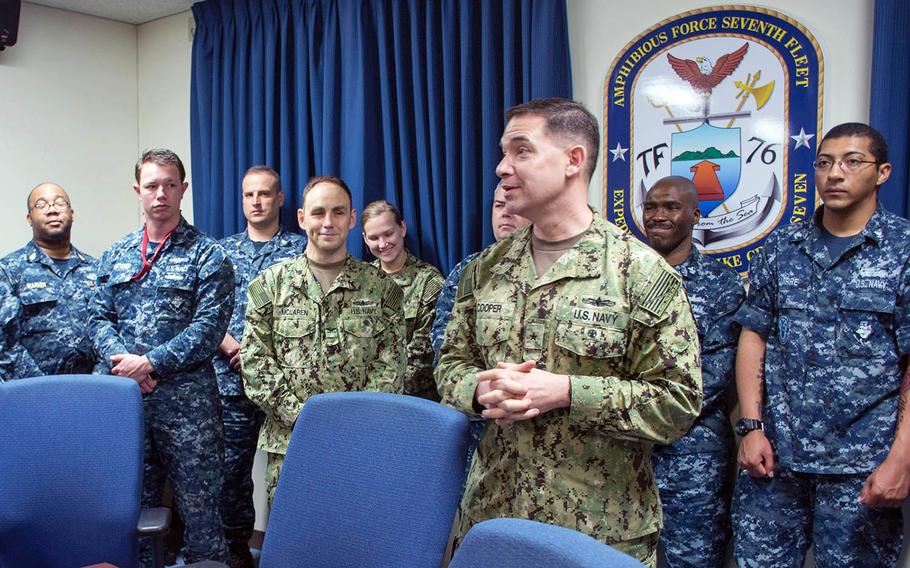 YOKOSUKA NAVAL BASE, Japan — Rear Adm. Brad Cooper assumed command of the Navy’s amphibious forces in the Pacific during a ceremony this week on Okinawa.

He replaced Capt. Ed Thompson as head of Task Force 76, which includes 10 ships and about 5,500 personnel in Japan, Korea and Guam. The unit received the USS Wasp earlier this month, which is replacing the USS Bonhomme Richard as the Navy’s only forward-deployed amphibious-assault ship and is capable of supporting the advanced F-35B Lightning II stealth fighter.

“I’m honored and excited to serve with this incredible team and excited about the operations that are on the horizon,” Cooper said in a Navy statement. “This staff has an outstanding reputation in 7th Fleet for its professionalism and mission accomplishment. I am confident we will continue to operate at such a high level of performance — as a team that includes this staff and every unit in CTF 76.”

Thompson, who used to serve as the unit’s deputy commander, was Task Force 76’s interim commander for five months. His previous boss, Rear Adm. Marc Dalton, left the job in September to take over Task Force 70 when its commander, Rear Adm. Charles Williams, was relieved after 17 sailors were killed in collisions involving the USS Fitzgerald and USS John S. McCain. Thompson will return to his job as deputy commander.

“This staff performed superbly during a critical time of refocus on maintenance, training and certifications and the readiness of our task force is a testament to the dedication by everyone in the CTF and on the staff,” Thompson said in the statement. “Our sailors, ships and staff remain committed to ensuring our force is ready for all assigned missions, the sailors take pride in their work and demonstrate they are the professionals that our nation requires in the Forward Deployed Naval Forces.”

Task Force 76 is the Navy’s only forward-deployed amphibious force. Though its headquarters are at White Beach Naval Facility, Okinawa, most of the ships are homeported in Sasebo, Japan. Those vessels usually sail from the Japanese mainland to Okinawa where they take on Marines before heading out on patrol.

Cooper, who previously served as Naval Forces Korea’s commander, graduated from the Naval Academy in 1989. His previous tours include serving as flag aide to the commander of the USS Dwight D. Eisenhower Carrier Strike Group, operations officer for the Fitzgerald and commander of both the USS Russell and USS Gettysburg.