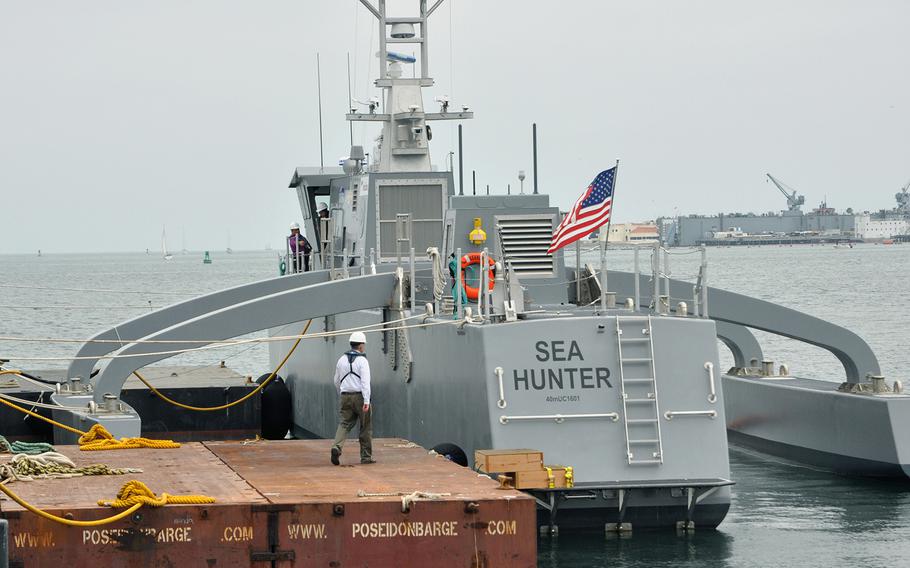 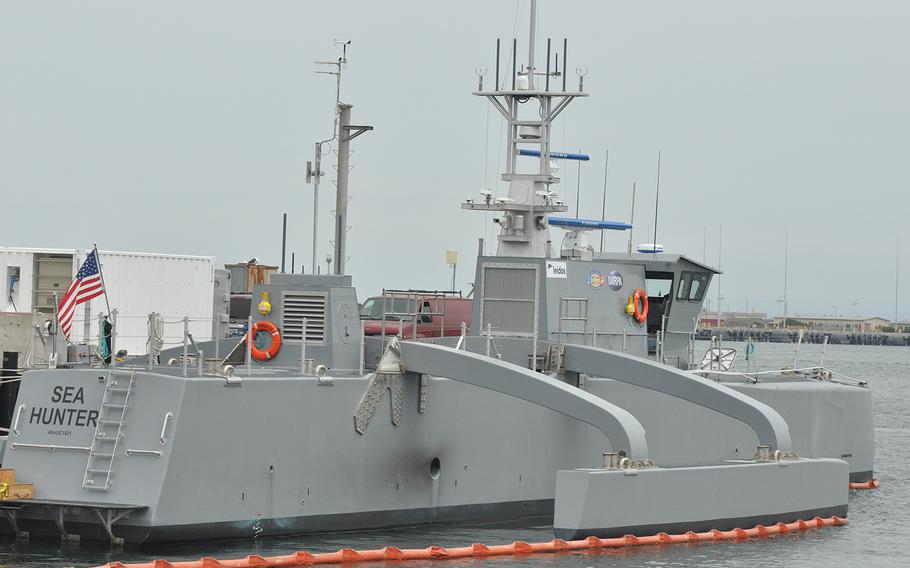 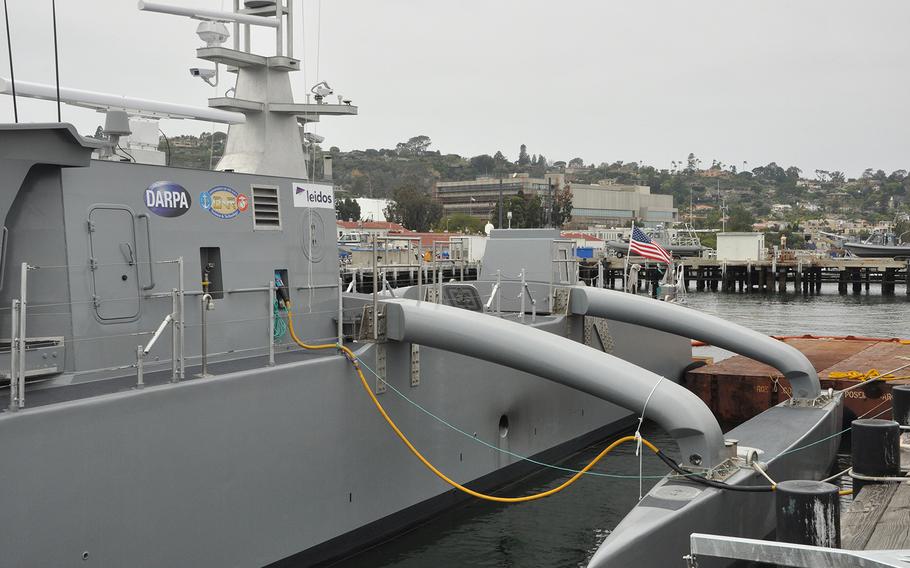 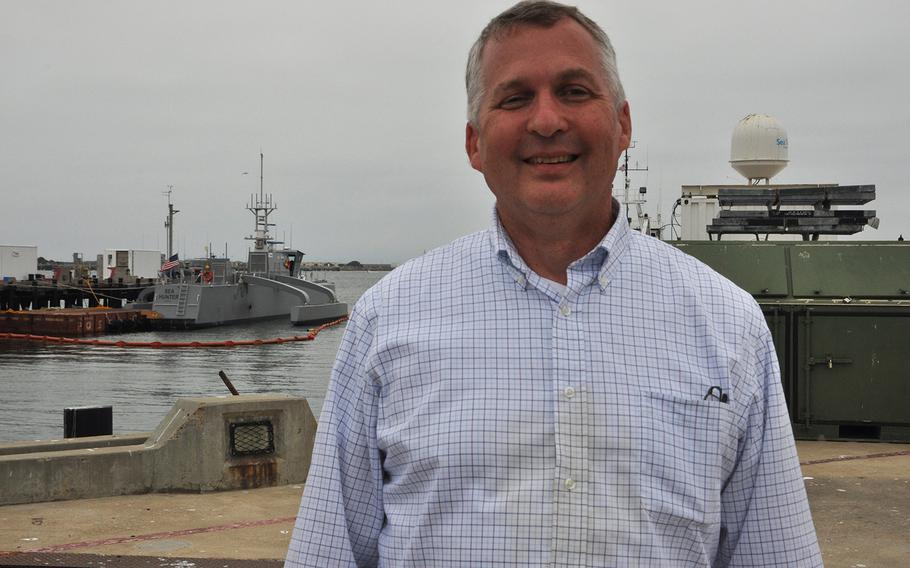 Buy Photo
Program director Scott Littlefield stands in front of the Navy's largest unmanned vessel prototype, the Sea Hunter, at the pier in San Diego where it will undergo testing for the next two years. (Dianna Cahn/Stars and Stripes) 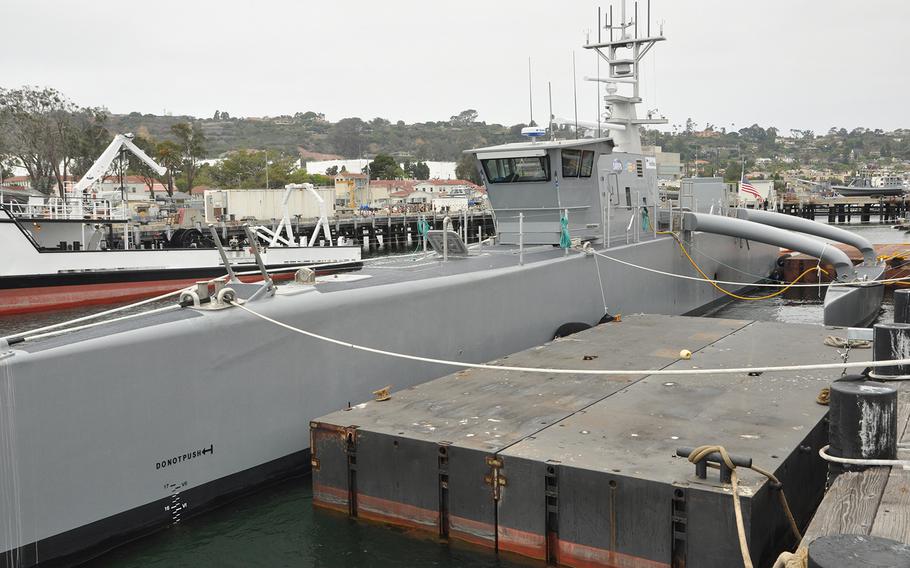 SAN DIEGO — Part trimaran and part robot, this odd-shaped ship is an unusual fit at the naval pier.

What’s even more unusual is this self-driving vessel is designed to travel thousands of miles through the ocean and conduct its mission without a single crew member on board.

At 132 feet long, the Sea Hunter is a prototype of the largest unmanned ship in the world and Navy officials are now looking at the sea drone’s potential to revolutionize fleet operations.

It is light, relatively cheap as far as warships go and can get to places that until now required human exposure, making it an appealing option for risky missions such as trailing a submarine or probing for mines at sea. And, with a price tag of $23 million for the prototype, it was far more expendable than a $1 billion battleship.

“The fleet the Navy has today is a bit like playing chess, where all the pieces are kings and queens,” said Scott Littlefield, who leads the program to develop this ship at the Defense Advanced Research Projects Agency, or DARPA. “So you have these extremely capable but very valuable platforms and you can’t afford to lose any of them. In a sense, what were are doing is developing something more like a pawn. You can have much more of them. You can afford to lose them.”

“It just opens up possibilities -- about how you configure a Navy and how you fight -- that are different than what we have today,” he added.

Known officially as the Anti-Submarine Warfare Continuous Trail Unmanned Vessel, or ACTUV, the program started in 2010 when creative minds at the defense innovations lab decided to look at what could be done with a large unmanned surface vessel and came up with submarine tracking and trailing.

Until then, the Navy had been doing lots of work with smaller, unmanned sea vehicles that were meant to be launched from larger manned warships.

Wouldn’t it be cool, they thought, if they could make something bigger, that could be launched from the pier and traverse the seas on its own for long periods of time. So, instead of the 10-ton, 40-foot vessels that the Navy was launching off its Littoral Combat Ships, they developed this 145-ton automated ship that they could load with sensors and fuel pumps and send from San Diego to Guam – some 10,000 nautical miles, without a crew.

“So you get away from this idea of small things carried around inside a warship, to a future architecture that is really more a mixture of a manned-unmanned fleet,” Littlefield said. “High-end manned vessels that are really capable but we have in limited numbers, augmented by potentially a whole lot of things that are quite a bit smaller but still pretty capable.”

Navy brass weren’t asking for a mid-sized surface warfare drone. But DARPA, the Pentagon’s innovation center, isn’t driven by requirements. These scientists are there to come up with “the art of the possible” and spark new ideas, Littlefield said.

If they don’t know it’s possible, they aren’t going to ask for it, he said. “Sometimes, we lead the requirements a little bit.”

Looking to Unmanned It made sense for a Navy that operates in tens of millions of square miles of ocean and a need to connect its platforms, said retired Vice Admiral Pete Daly, a former Fleet Forces commander who now leads the U.S. Naval Institute.

“The Navy is always looking to extend its coverage,” Daly said. “So now as a service with a strong background in technology and in this environment, it makes sense to have more independent vehicles and autonomous vehicles.”

Besides, unmanned is the way of the future, he said. The Navy created a new department for unmanned platforms last year and continues to budget for new drone acquisitions. In 2013, the service launched an unmanned aircraft prototype, the X-47B, from a carrier and, while that program is slow in advancing, there are plans to develop it, a Navy spokesman said.

Similarly, the Navy is investing in unmanned underwater vehicles and has requested nearly $68 million in the 2017 budget for an ongoing program and an additional $634 million for creating new prototypes, said Lt. Kara Yingling, a Navy spokeswoman.

“The Navy has identified many values of unmanned warfare systems, such as reducing risk to human life, increasing situational awareness, survivability and lethality and bringing capabilities into previously inaccessible areas,” she said. “We strongly believe we are making the right investments and recognize our systems will evolve over time and enable future unmanned and optionally manned programs.”

So DARPA set out to create a vessel to track submarines, went about designing the ship and it’s automated software, and then bringing Navy leadership on board to see if they liked what they saw. Ultimately, they did, but thought it could be useful in different missions, such as mine sweeping.

Steering the ship The big challenge – and one that commercial and military industries alike were watching - was not related to programming the ship for missions. Rather it was more basic – making an automated vessel at sea capable of driving safely, Littlefield said.

If the ship couldn’t follow the international regulations for preventing collisions at sea, known as Colregs, people wouldn’t want to use it, he said.

They had to be certain that the ship would not only avoid a collision on the open seas, but obey the protocol for doing so. It needed to recognize which ship had the right of way and which would move – in any number of scenarios. And it needed to behave the way an experienced human mariner would behave, and if not, at least in a way that wouldn’t throw off the other ships.

At first, they tested the system in a lab, then later on a surrogate ship – a small vessel they could use to test the program at sea.

DARPA worked with a company called Leidos to design and construct the ACTUV prototype. The idea behind the trimaran design was a narrow sleek hull that could slice through the water with ease without taking up too much unnecessary space.

Inside the main hull are three rooms – a machine room on either end and a center section containing banks of computer racks that are considered the brains of the ship.

Here lies the most proprietary part of the Sea Hunter – the only exotic technology on the vessel, Littlefield said. And while the Navy was willing to offer a tour, it did not allow any photographs on or inside the vessel.

To stabilize the ship, they designed external cross braces to hold smaller hulls at either side, giving the vessel the kind of stability it would need to navigate the high seas.

They used a fiberglass construction technique, using a mold and sandwiching foam core between layers of fiberglass, then vacuuming the air and pouring in resin that would cure and harden within a few hours. There was one mold for the hull, a second for the deck.

The way of the future After building the prototype in Portland, Ore., the Navy last month towed it to San Diego, where it will undergo two years of testing and software development. The Navy placed a temporary operator house atop the vessel that will allow switching between manual and autonomous operations during testing. It can be removed later.

And being in San Diego, next to the fleet, they will have an opportunity to look closely at all the possible missions they can do with it.

But Daly warned the Navy was still just scratching the surface with its foray into drone warfare equipment. It’s one thing, he said, to use drone aircraft in conflicts such as Iraq and Afghanistan, where the opponent has lower-end technology.

But if they all get wiped out in the first face-off with a “high-end” opponent, then the technology is useless.

Still, Daly said, he expects the Navy will broadly embrace unmanned technology in the coming years.

“In the next decade, we will see in the major warfare areas a pairing of manned and unmanned technology,” he said. “I believe you will see a truly broad acceptance of autonomous vehicles out there, operating on their own and phoning home when they need to.”