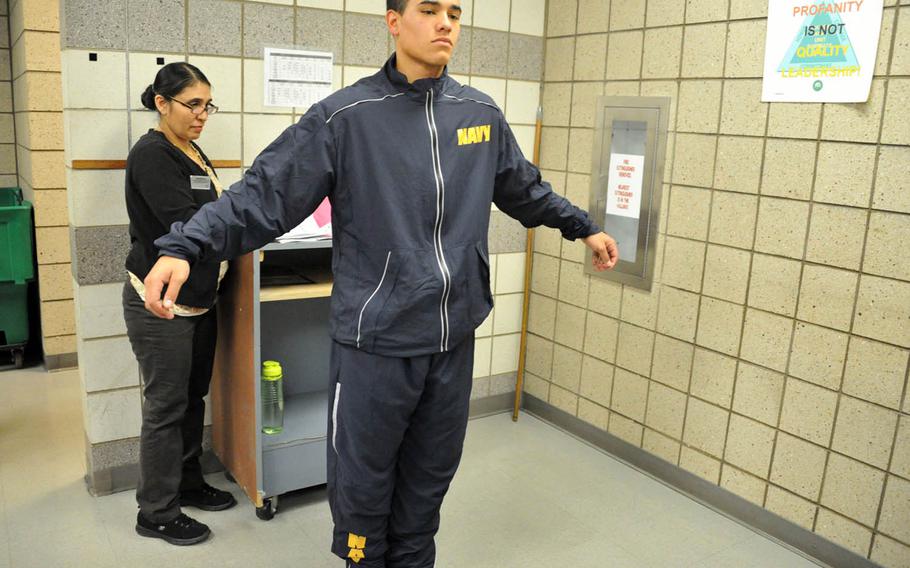 The Navy’s unveiling of a mandatory new “fitness suit” met with a tepid response from sailors based in Japan on Friday.

The mesh-lined, moisture-wicking and water repellant blue jacket and pants, featuring gold logos and silver trim, goes on sale at base exchanges from July, the Navy announced earlier this week.

The suit can be worn during workouts and on liberty, but isn’t allowed to be worn as a work uniform, officials said in a command message.

Seaman Chance Crandall, an operations specialist who serves on the Yokosuka, Japan-based USS Blue Ridge, said he approves of the new design but isn’t thrilled with purchasing something that won’t get much use.

“It seems like an added expense really,” he said. “When it’s raining the suit might be nice … I feel like it would capture a lot of body heat and I prefer to wear minimal layers. I probably wouldn’t use it too much.”

Crandall doesn’t plan to wear the tracksuit on liberty because he wants a degree of separation from the Navy during his off time, he said.

“I think it’s ridiculous for the Navy to change the [physical training] uniform,” she said.

“It’s just making it more fancy looking out of more expensive material. I don’t see why we need it. It’s humid here, so shorts and a T-shirt are your best bet.”

Production delays held up the rollout of the new outfit, which the Navy started issuing to new recruits last month and will be available fleet-wide from October, officials said.

Other service branches have had their own tracksuits for several years.

All sailors are required to own the new outfit by Sept. 30, 2021. Enlisted sailors began receiving a small increase to their uniform allowance last month to pay for it. Officers do not receive a uniform allowance.