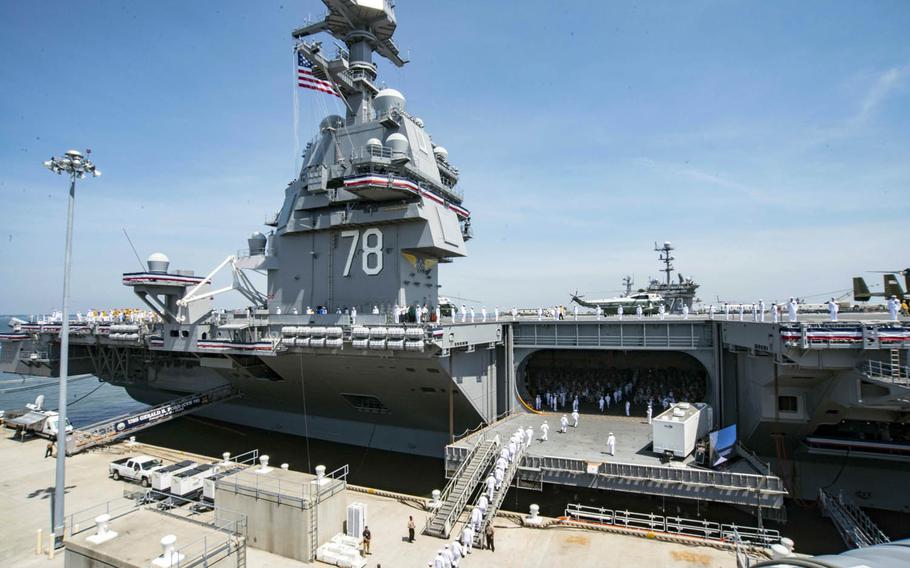 Growing the Navy’s fleet to 355 ships will likely require extending the service of current ships, reactivating vessels and investing heavily in the capacity of the country’s seven primary shipbuilding plants, a panel of experts said Tuesday.

But the timeframe for reaching that amount, which the Navy announced in December as the absolute minimum number of ships required for its missions, is just as important as the means in reaching it.

“Both China and Russia have taken advantage of the United States’ recent strategic focus on counterterrorism campaigns in Afghanistan and Iraq to assume challenging profiles on the high seas,” Jerry Hendrix, director of the defense strategies and assessments program at the Center for a New American Security, testified before the Senate Armed Services Committee. “To head a future crisis off, the U.S. Navy must expand rapidly enough to convince others that eventual military victory at sea is not even remotely possible. To accomplish this goal, the Navy must reach the 355-ship range within 10 years,” he said.

The Congressional Budget Office estimates that the earliest the Navy could reach 355 ships is 2035 — provided funding remains constant during those 18 years.

Ronald O’Rourke, a specialist in naval affairs with the Congressional Research Service, said that while ship construction cannot be “increased overnight,” Congress has the option of fully funding additional ships in the near term — as early as the fiscal year beginning in October — with the understanding that construction would not begin until ship yards are able to begin.

“Fully funding additional ships in the near term would send a signal to industry and a signal of deterrence to potential adversaries, such as China,” O’Rourke said.

The greatest challenge to reaching 355 ships is the nation’s shipbuilding capability, said Eric Labs, senior analyst for naval forces and weapons at the Congressional Budget Office.

The workforce at the nation’s five large and two smaller shipbuilding plants would need $4 billion in infrastructure upgrades and a 40-percent hike in the overall workforce over the next five to 10 years, he said.

Construction of carriers and submarines would pose the greatest challenge for the shipbuilding industry, Labs said. The workload of submarine-building plants is already expected to double by 2021 with the scheduled construction of the Columbia-class subs beginning then.

Other panelists contended that extending the life of certain key aging ships and reactivating some in the so-called “Ghost Fleet” could close the gap to reach 355 until new ones are built.

The Navy is conducting a feasibility assessment for extending and reactivating ships, O’Rourke said.

In particular, the Navy is looking at the Perry-class guided missile frigates, the youngest of which are 25 years old and thus have only a few years of scheduled service left.

Age and condition of ships are not the only consideration in the Navy’s assessment, he said.

“If you were to bring them back, could they actually do something that needs to be done?” O’Rourke said.

“We’re not just chasing numbers for their own sake. We don’t just bring ships back to put a mark on a chalkboard; you’re doing it because you believe that ship in its reactivated capacity can actually do something of value for the Navy that’s worth the cost you put into it,” he said.

Labs was less than sanguine on the feasibility of reactivation.

“The problem is that when the Navy knows it’s going to retire a ship, they stop investing in the ship,” Labs said. “They stop maintaining it well and efficiently.”

And after bringing such a ship up to proper maintenance, its combat systems would likely need upgrading.

“All of that is going to take time and money and effort,” he said.