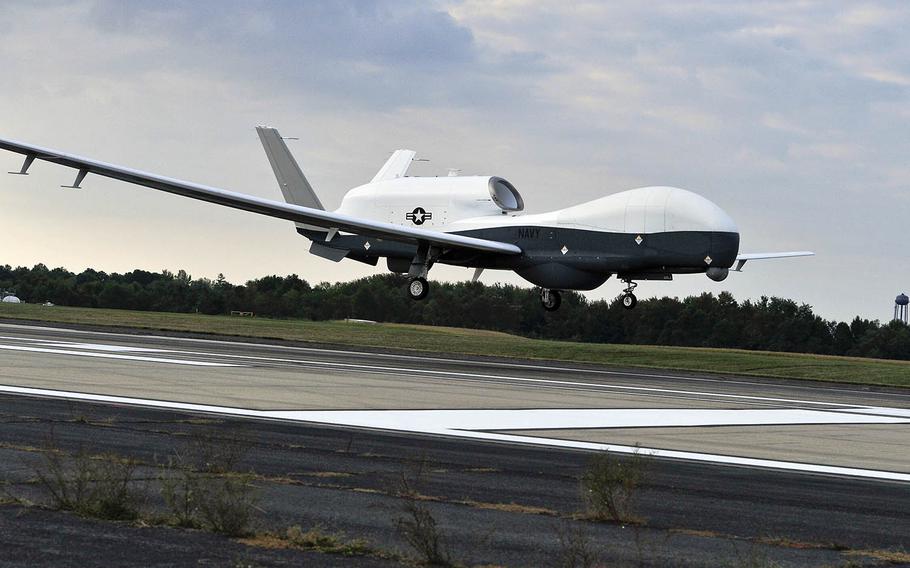 The high-altitude drones will be able to provide combat information to expeditionary and carrier strike groups and can communicate directly with the Navy’s manned P-8A Poseidon aircraft.

The addition of the land-based drones, which weigh about 16 tons and have a 131-foot wingspan, comes at a crucial time in the Pacific.

At a Senate committee hearing in March, U.S. Pacific Command chief Adm. Harry Harris told lawmakers that he did not have enough spy aircraft “because there isn’t enough to go around.”

He said he lacked the needed intelligence, surveillance and reconnaissance, or ISR, aircraft to verify any future denuclearization agreement that might come out of the upcoming proposed meeting between President Donald Trump and Kim Jong Un, the leader of North Korea.

China’s increased activities in the South China Sea, where it has militarized disputed islands, have also intensified the need for U.S. surveillance. Beijing has installed electronic jamming equipment on two of the artificial islands it has built in the sea, the Wall Street Journal reported Monday.

The first pair of Tritons will be able to track targets on water surfaces from as high as 60,000 feet. The data will be transmitted to Naval Station Mayport, Fla., or Naval Air Station Whidbey Island, Wash.

The information could also be sent to the Navy’s submarine-hunting P-8A Poseidon aircraft.

“One of the main reasons that the Navy decided to fund Triton was to have that teaming arrangement, to be able to communicate back and forth between P-8s and the Triton aircraft,” Mackin said. “One of the primary missions of P-8 is to do the anti-submarine warfare and ISR, not necessarily things you want to do at the same time.”

The capability for the two types of aircraft to “chat” means “situational awareness of the fleet will be enhanced,” he said.

Made by Northrop Grumman, the MQ-4C Triton is based on the Air Force’s RQ-4B Global Hawk surveillance drone. The Air Force operates a small fleet of Global Hawks out of Andersen Air Force Base, Guam, although five of them were moved to Yokota Air Base in western Tokyo for several months last year because of favorable weather conditions.