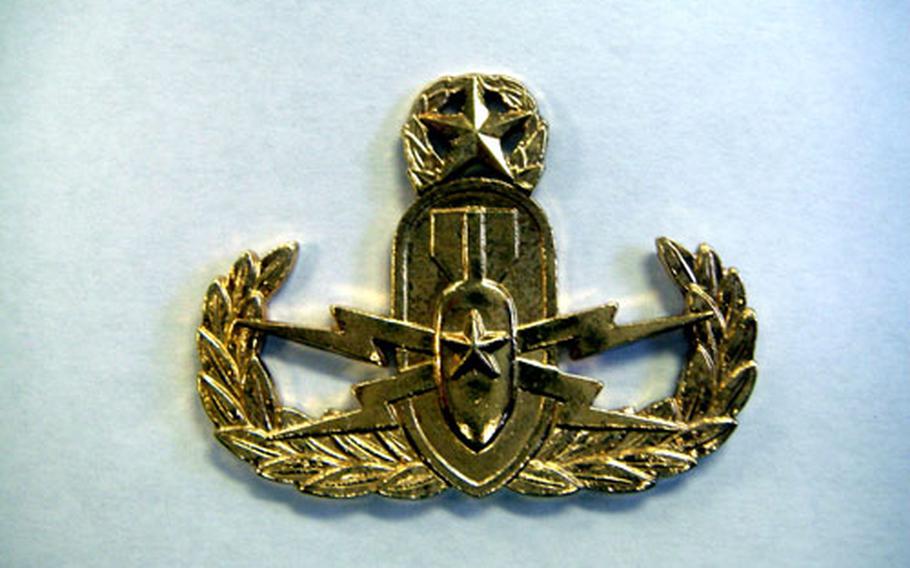 ARLINGTON, Va. &#8212; The Navy&#8217;s Explosive Ordnance Disposal officer community now has a new insignia to go with its new name.

&#8220;In the past, EOD officers were authorized to wear the Special Operations insignia (a gold colored insignia) after completing Naval Diving and Salvage Training Center school and qualifying as a Surface Warfare Officer,&#8221; Andrews said in an e-mail Friday.

But now EOD officers no longer need to be qualified as surface warfare officers, Andrews said.

So the Navy created the EOD Officer Warfare insignia, a gold device with the same design as the Master EOD badge, Navy officials said. The insignia will be worn by officers who have qualified as Master EOD technicians.

&#8220;Enlisted personnel will still wear the EOD badge (it is silver and there are three levels of qualification &#8212; basic, senior and master),&#8221; Clark said in a Wednesday e-mail.

EOD officers had worn the Master EOD badge in addition to their primary device, but now they will only wear the gold insignia once it becomes available later this year, Navy officials said.

The insignia is expected to be in Navy Exchange stores no later than April, the Navy message said.

Clark explained the meaning of the insignia&#8217;s design, which features:

l A wreath to commemorate EOD personnel who have been killed in the line of duty.

l A bomb, which represents EOD personnel&#8217;s goal of making sure bombs do not go off.

l A shield, representing the EOD mission of protecting people and property from accidental explosions.

For more information, go to Navy Administrative Message 364/07 at: www.npc.navy.mil