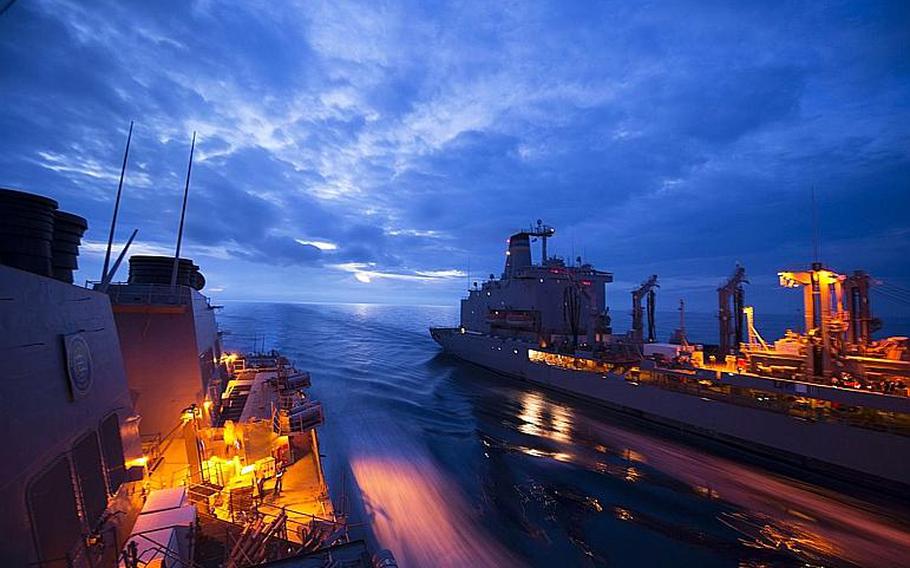 The USNS Leroy Grumman oiler alongside the destroyer USS Ross during a refueling on the Mediterranean on Oct. 28, 2014. The Grumman is one of MSC's duty oilers for the 6th Fleet theater, which has seen increased military activity in the past two years. (Weston Jones/U.S. Navy)

NAPLES, Italy — The Navy’s fleet of mostly civilian-crewed support ships is building up its presence off Europe and Africa, as insurgent activity and potential threats to allies by Russia stretch the military’s supply lines.

The Military Sealift Command is adding ships within the 6th Fleet theater, which spans the eastern Atlantic Ocean from the Arctic to Antarctica. The theater includes the Mediterranean Sea, a critical point for operations against adversaries in Africa and the Middle East, and the Black Sea, an area of tensions since Russia annexed Ukraine’s Crimean Peninsula in 2014.

“I definitely don’t see (activity) going down anytime soon,” said Capt. Eric Conzen, MSC commander for Europe and Africa. “There’s a desire for it to increase.”

MSC last year transported twice the ordnance, three times the critical parts and one-third more cargo in Europe and Africa than in 2016, according to data from the command, which operates about 110 noncombatant ships worldwide.

More warships are in the theater partly because NATO is running more missions and exercises in response to Russia’s assertive actions, Conzen said.

The Navy’s support command, which oversees the leasing of commercial cargo ships for all military services, has seen shipments of vehicles and helicopters almost double in the past year in Europe and Africa, said Fred Woody, MSC deputy operations officer in Europe.

Before last year, MSC’s only full-time ship in the 6th Fleet theater was an oiler. MSC has since brought in two fast-transport vessels — the USNS Carson City and the USNS Trenton — and it plans to add a third one in the spring to carry personnel, equipment and supplies.

The Trenton is used mainly for surveillance and intelligence-gathering, partly to aid U.S. military missions in Africa, Conzen said.

The USNS William McLean, which hauls cargo and ammunition, was deployed recently to the theater and will remain indefinitely, officials said.

Next year, the USNS Hershel “Woody” Williams, an MSC sea base, is scheduled to operate in the theater. The 250-person ship has a flight deck, magazines and spaces for repairs. It will assist with security patrols, anti-mine measures, humanitarian efforts and crisis response.

Analysts say Russia is the main reason the U.S. and NATO have amplified their naval activities in the theater.

Russia’s ongoing Ukraine intervention and its rising submarine deployments are part of a larger effort to extend its military reach and reassert its influence, analysts said.

“Moscow’s foreign policy has placed a premium on power projection, and much of that task has fallen to the Russian navy,” said Michael Petersen, director of the Naval War College’s Russia Maritime Studies Institute. “This is particularly true in the Black Sea and eastern Mediterranean but is also the case in the far northern Atlantic.”

The navy also played a large part in Russia’s intervention in Syria on behalf of President Bashar Assad. Russia’s fleet is now establishing a permanent presence in Syria by leasing a mooring facility at the Tartus base that will be expanded to hold 11 warships, Petersen said. This could lead to more Russian ships in the Mediterranean, he added.

In the past year, the Army has expanded its presence in Niger, where a new drone base is under construction, and in Somalia, where U.S. forces are playing a larger role in battling the extremist group al-Shabab. That’s in addition to the scores of exercises Africa Command conducts across the continent.

MSC uses its one full-time oiler in the region to help refuel U.S. and NATO ships. The oiler now refuels two or more ships during a week at sea far more frequently than in recent years, MSC spokesman Matthew Montgomery said.

Delivering more fuel and supplies doesn’t require more ship personnel, but it does call for more planning, Woody said. MSC has added a planner in its Naples office and might hire one or two more, he said.

As the military becomes more active in the theater, MSC will look at expanding its presence even more, Conzen said.

“We’re getting it done at the moment,” Conzen said. “But we certainly need more ships.”