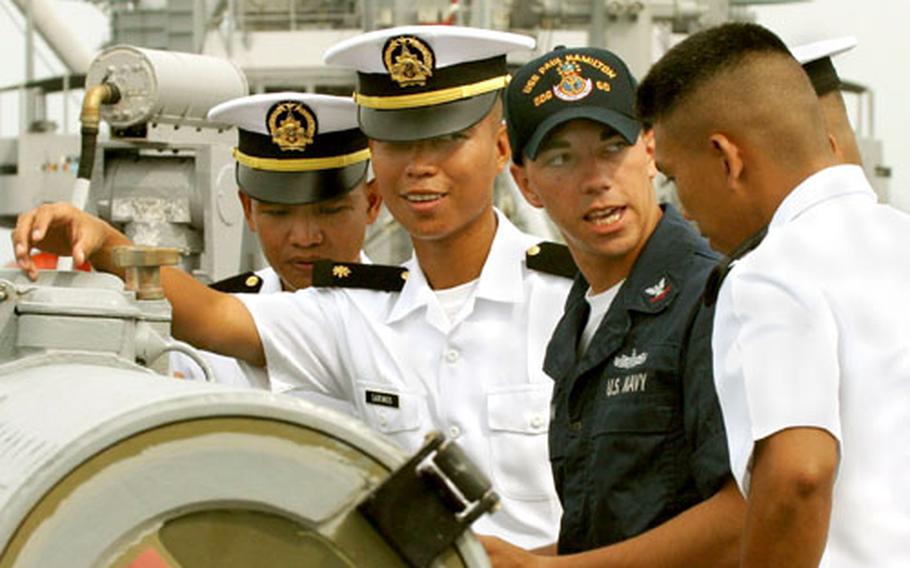 SUBIC BAY, Philippines &#8212; In the decade since the U.S. Navy began a sequential series of bilateral exercises with Southeast Asian countries, Cooperation Afloat Readiness and Training has evolved from honing surface-warfare skills to an intricate training that reflects security concerns in the region.

&#8220;It&#8217;s gotten more complex, more robust, [including] naval warfare exercises, complex maneuvers at sea, gunfire exercises, missile fire training and the CENTRIX [communications] system,&#8221; said Rear Adm. Kevin Quinn, who leads the task force in change of CARAT. &#8220;But through it all we do tie in the regional maritime security exercises.&#8221;

&#8220;We&#8217;ve shifted the focus to maritime security and freedom of commerce,&#8221; said Commodore Buzz Little, who leads the exercise and the ships participating in it.

The exercise takes place in the nations surrounding some of the most important sea channels in the region, where terrorism, piracy, drugs and weapons transportation are great concerns.

&#8220;The maritime-security focus of the exercise contributes to the security of all of the maritime waterways, particularly the Straits of Malacca,&#8221; through which much of the world&#8217;s trade and oil pass, Quinn said.

The U.S. Navy is under way in the Philippines with its sixth and final phase of CARAT for 2005.

During the course of the exercise, U.S. forces practiced a variety of exercises, from missile firing against unmanned drones in Singapore, to salvage and diving and gunfire. Each phase is tailored to the needs of participating countries.

In the Philippines, where there are hundreds of miles of coastline and a threat of terrorism, the two countries will focus on training close to shore &#8212; boats operations and amphibious landings, Little said.

But behind the needs of each participating country is the need for overall maritime security, and that is helping to develop the purpose and goals of CARAT.

The exercise also gives junior sailors and officers a chance to participate in coordination and planning.

And like all bilateral training, CARAT develops relationships. During tsunami relief efforts earlier this year in South Asia, the U.S. Navy found itself working closely with many CARAT partners, including Singapore, Malaysia, Thailand and Indonesia.

Quinn said a month after the tsunami relief began, Singaporean navy officials pointed to CARAT and the communication and interaction it provides as a great help in the relief effort.

Among all the tactical training, CARAT adds a community-relations focus. The exercise provides medical, dental and veterinarian clinics to local communities. Medical teams even do cataract surgery, Quinn said.