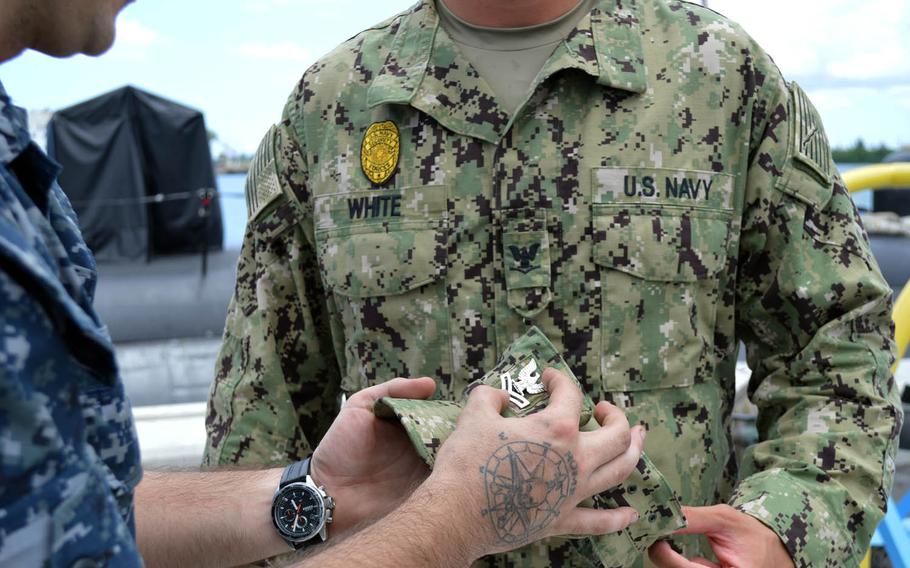 A two-year rollout should put the green, pixelated, camouflage work uniforms known as "green cammies" in every sailor's wardrobe by October 2019. They're replacing blue outfits that have been the Navy's only authorized work uniform since July 2010. (Lauren Spaziano/U.S. Navy)

YOKOSUKA NAVAL BASE, Japan — Some sailors will be able to trade in their blueberries uniforms for the new green cammies starting next month, the Navy said in a message to the fleet last week.

A two-year rollout should put the green, pixelated, camouflage work uniforms — called the Navy Working Uniform Type III — in every sailor’s wardrobe by October 2019, the message said. They’re replacing blue outfits — nicknamed blueberries — that have been the Navy’s only authorized work uniform since July 2010.

The first sailors to get the new uniforms will be at the Navy’s Recruit Training Command in Great Lakes, Ill., at Officer Candidate School in Newport, R.I., and in the Southwest Region, the Navy said in its message.

The old gear is being phased out partly because of sailors’ complaints, former Secretary of the Navy Ray Mabus said last summer. Sailors have panned the blue outfits as uncomfortable, heavy and a fire hazard.

“They want uniforms that are comfortable, lightweight, breathable … and they want fewer of them,” Mabus said at the time.

Sailors have been welcoming the upcoming wardrobe change.

“[The green cammies] look more professional,” he said. “A lot of people did not like the blue camouflage.”

Seaman Andre Spain, an aviation boatswain’s mate aboard the USS Ronald Reagan, said he likes the unique look of the new uniform.

Black-leather safety boots will remain standard for the green uniform, but commanding officers may authorize Navy-certified desert-tan or coyote-brown boots when safety boots aren’t required, the Navy said in last week’s message. Sailors are allowed to wear a coyote-brown command ball cap in lieu of a blue cap.

Enlisted sailors will get extra clothing allowance money to pay for the new uniform, the Navy said.

Green cammies are already sold at base exchanges in Hawaii, Newport, R.I., Europe, Africa and Southwest Asia. Exchanges in Japan and Guam will start selling the uniforms by January 2019, and they will be on sale at every base exchange by July 2019, the Navy said.