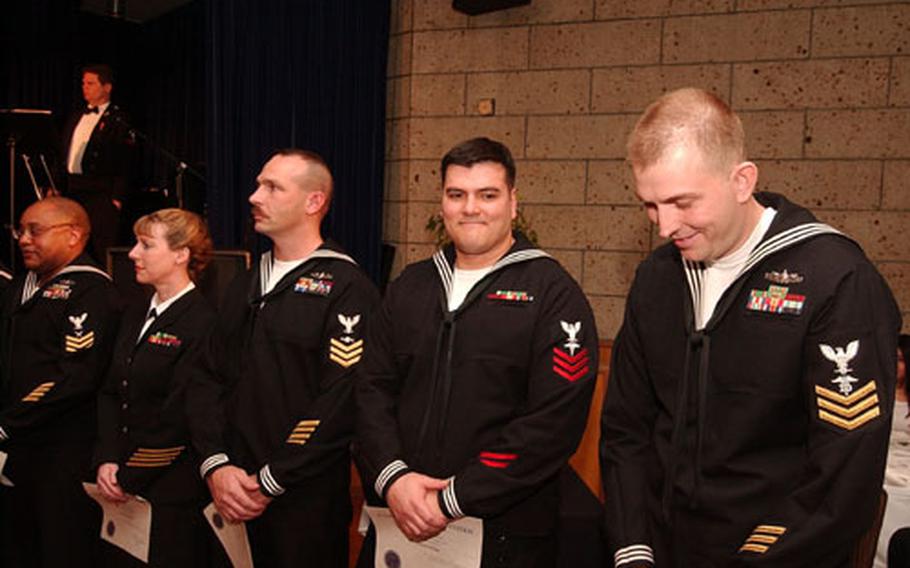 Petty Officer 1st Class Joseph Colon, second from right, reacts as he is named the 2003 Commander, Naval Forces Japan Sailor of the Year at an awards banquet on Friday night. (Courtesy of U.S. Navy)

After a rigorous four-day review last week by the region&#8217;s command master chiefs, he was selected Commander, Naval Forces Japan&#8217;s Sailor of the Year.

He next competes for Pacific Sailor of the Year, which, if won, brings a promotion and a position on the staff of the master chief petty officer of the Navy.

CNFJ Regional Command Master Chief Michael Driscoll told the nine candidates at the start of the review Tuesday that &#8220;no matter what the results are at the end of the week, you are all winners.&#8221;

The weeding out begins when each sailor presents a command briefing and short tutorial to a panel of command master chiefs. The final phase is sitting before an intensive review board.

Master chiefs can ask anything and judge the most minute details of the sailors&#8217; appearance and behavior. Uniforms must be creased just right and shoes shined to a gleam.

Petty Officer 1st Class Pat Layug, a shopkeeper from Atsugi Naval Air Facility, has spent most nights during the past two weeks reviewing general Navy knowledge and new policies. &#8220;You&#8217;ve got to know your stuff,&#8221; he agreed.

While the Navy is heavy with tradition, the selection process focuses on the sailors&#8217; knowledge of new and evolving plans. They are asked about objectives or programs still in planning stages.

&#8220;I think the key is staying on top of this all year,&#8221; said Petty Officer 1st Class Amy Pearson, a legalman from Misawa Naval Air Facility.

Master chiefs aren&#8217;t trying to cut down the candidates they&#8217;re evaluating, but they do put on some pressure during the boards to see how they react, Courville said.

They also don&#8217;t expect the sailors to know everything, but they must react well to questioning. &#8220;These people don&#8217;t get to this position by feeding a line of nonsense,&#8221; Courville said.

The master chiefs might ask sailors why they believe they should be selected, or how a Navy program not even yet implemented might pan out in several years.

&#8220;They need to be articulate with a good working knowledge of where the Navy&#8217;s heading,&#8221; said Misawa Command Master Chief Michael W. McCarthy.

As part of the review, the sailors started with an evening &#8220;meet-and-greet&#8221; Monday night, under the watchful eyes of the master chiefs. The next day they presented their command briefs and spent the afternoon under observation in a social setting. Later, they faced the boards in a small paneled conference room, one at a time.

He said sailors spend their careers quietly fearing master chiefs. Then suddenly, they&#8217;re standing in front of a panel of them.

Being selected can help fortify a sailor&#8217;s future. Many command sailors of the year soon advance to the next rank.