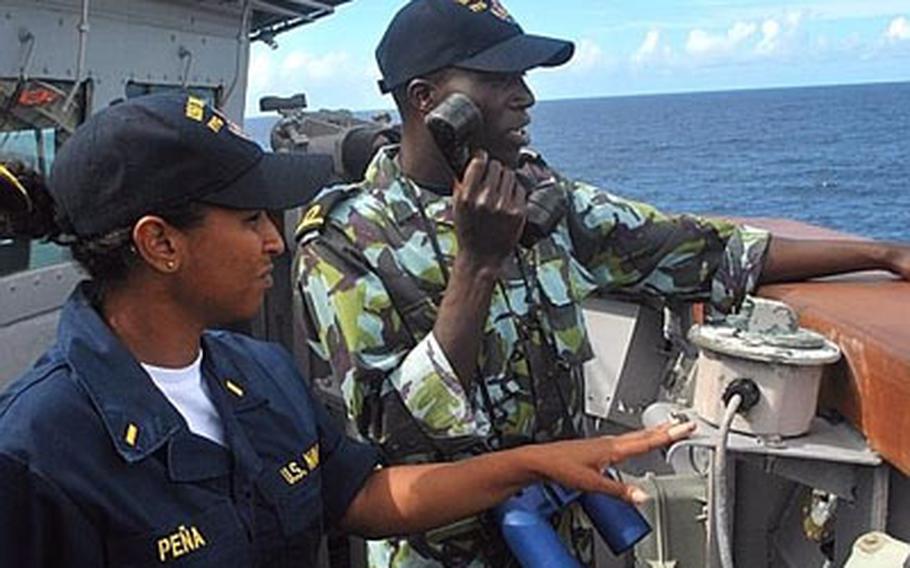 Ensign Emily Pena, left, an engineering officer aboard the guided-missile frigate USS Nicholas, instructs an Africa Partnership Station East student how to communicate ship coordinates with the bridge during a man-overboard drill. (Tracey L. Whitley/Courtesy of the U.S. Navy)

NAVAL STATION ROTA, Spain &#8212; When the USS Gunston Hall arrives in Ghana this week to lead the Africa Partnership Station, it joins a program that has changed dramatically since the U.S. Navy formed the APS nearly three years ago.

Started in late 2007, APS initially focused on training and equipping West African navies. But the mission has expanded to include navies on the east side of the continent as well, with the expectation that member nations will act more as a regional coalition.

"Several years in, the focus of APS is not just to teach the participating countries to defend their own interests, but to build a[n] &#8230; African force that can not only teach other African nations their acquired skills, but respond to disasters if needed," said Nigerian navy Capt. Jimi Osinowo, second-in-command of the APS West mission.

The program, now a multinational maritime effort, maintains a near-constant presence off the continent. The Gunston Hall, for example, has a crew onboard that includes officers from the U.S., Italy, Germany, France and Brazil, as well as officers from a handful of African nations, with an African partner taking over as second-in-command for the first time.

While APS leaders tout the program&#8217;s advances, one analyst said it&#8217;s too early to measure its success.

"This is APS&#8217; third iteration, and it is just impossible to really make serious changes in Africa in only three years," said Augustus Vogel, from the National Defense University&#8217;s African Center for Strategic Studies. "So if our grade is based on whether we have changed Africa, we haven&#8217;t had time to get there yet.

"But if our grade is on improvement, getting people involved, and really turning maritime security into a viable and useful topic, then I think we are doing well," said Vogel, who is sailing on the Gunston Hall as the ship&#8217;s civilian-military development adviser.

Change takes time, from the nations acquiring equipment and ships, to the training setting in, Vogel said.

An important metric for success in Africa is the level of African participation, he said.

"This has been a mixed bag, but I see some hope," Vogel said. "African navies as institutions are not drastically different after only three years, but the level of African participation on APS improves markedly every year."

Just a few years ago, West African nations were wary of their neighbors, Osinowo said. Now, they are sharing military intelligence and cooperating to capture suspected criminals.

While much of the U.S. military then focused on the Middle East, Navy leaders in Europe, under then-Adm. Harry Ulrich of U.S. Naval Forces Europe, looked to expand the effort to the south, in Africa, and the east, to places such as Ukraine.

Early on, a few times a year, the Navy would send a submarine tender on two-month deployments to the Gulf of Guinea to teach African navies how to defend against smuggling, piracy and terrorism.

A total of 11 Gulf of Guinea nations &#8212; supported by the U.S. State Department and military &#8212; signed a landmark agreement in November 2006 to fight terrorism and criminal activity in the African region. That agreement set in motion the formal APS program.

The program expanded in 2009 to include the eastern coast nations of Kenya, Mozambique and Tanzania, as well as the islands of Madagascar, Mauritius and Reunion.

The U.S. Navy has increased funding for the program from year to year. In 2008, it spent $3.7 million on APS. That figure rose to $5.27 million in 2009. The figure does not include ship operating costs, which would have been paid regardless of where the ship operated, Navy spokesman Lt. Patrick Foughty said.

"We&#8217;re not going to stabilize the fishing industry with APS. They will," Harris said. "And we will help them."

Part of the program&#8217;s success hinges on training Africans to invest efforts in problems they can tackle on their own, such as regulating fishing. But, without knowing the number of fish that populate the oceans, for example, it is difficult for governments to set limits on the number that can be caught, Vogel said.

The Navy solicited the help of organizations such as the National Oceanic and Atmospheric Administration to help map ocean floors and determine fish population, and lawyers are working with various attorneys general from African nations to develop laws and prosecutorial procedures to enforce them, he said.

"The [drug] trafficking problem is huge," Harris said. "It&#8217;s in the hundreds of billions of dollars estimated."

West Africa is becoming a manufacturing point primarily for cocaine bound for Europe, and Colombian drug cartels increasingly use the West African coast for staging bases to evade the well-patrolled waters off South America.

And a lot of the money from those drugs is finding its way to terrorist groups, Adm. Mark Fitzgerald, commander of U.S. Naval Forces Europe/Africa and NATO&#8217;s Allied Joint Command Naples, said during an interview on the role of the U.S. Navy in counterinsurgency missions in general.

While average Americans might not be directly affected by the drug or human trafficking in Africa, they&#8217;re sure to feel the influence of illegal petroleum activities when they gas up their cars, Osinowo said.

About 18 percent of U.S. crude oil imports come from West Africa; about the same percentage as from the Middle East. Oil bunkering &#8212; stealing fuel from storage facilities &#8212; in the Niger Delta is worth roughly $3 million a day, and illegal activity drives up prices.

"[T]he more problems that are there, the more African economies continue to suffer," he said.

There is tangible evidence the efforts are working, Osinowo said.

Suspected criminals recently tried to evade capture by fleeing from one jurisdiction to another of two APS partner nations &#8212; Ghana and Nigeria &#8212; only to be caught when one navy radioed ahead to the other.

But can the African nations build on this success?

"[I]t&#8217;s hard to say what APS will look like over the next five years," Vogel said. "I think it is safe to say that there will be a continued refining of the effort as we attempt to improve our APS collaborations."