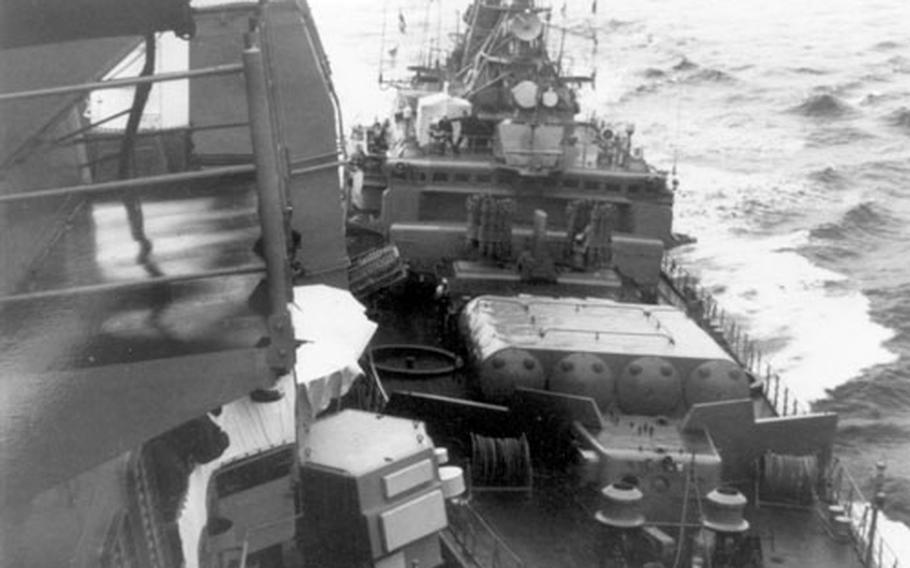 A Soviet Krivak-class frigate shown here from the deck of the USS Yorktown on Feb. 12, 1988, hit the Yorktown as it passed though Soviet territorial waters in the Black Sea. The ships were engaged in “shouldering,” a close-quarters maneuver used extensively during the Cold War. (Photo courtesy of the Naval Historical Center)

ARLINGTON, Va. &#8212; The Navy is reviewing its use of a maneuver designed to divert enemy ships after two of its destroyers collided during training exercises in August, said Paul Taylor, a spokesman for Naval Surface Force on Wednesday.

On Aug. 22, the USS Winston Churchill and the USS McFaul collided off the coast of Jacksonville, Fla. No sailors or Marines were injured in the incident.

The Virginian-Pilot first reported Wednesday that the ships were engaged in a maneuver called &#8220;shouldering,&#8221; where ships get close to each other at high speeds and one tries to force the other to turn.

David F. Winkler, of the Naval Historical Foundation, called the maneuver a &#8220;chicken of the seas game.&#8221;

Taylor confirmed the two ships were engaged in shouldering at the collision, but he did not attribute the collision to the maneuver per se.

Still, both skippers have retained their command following the incident and an investigation into the incident recommended the Navy review whether shouldering should be practiced, Taylor said.

Shouldering was developed in the early days of the Cold War when the Soviets would send ships to disrupt and spy on carrier groups, Winkler said.

&#8220;Our carriers represented a direct threat to the security of the Soviet Union, because you can&#8217;t confirm or deny the presence of nuclear weapons aboard those ships, but they were certainly nuclear capable,&#8221; he said.

During the Vietnam War, Soviet ships also would get in front of U.S. carriers to try to force them to change direction, Winkler said. To counter the Soviets, the U.S. Navy assigned ships to serve as blockers between the Soviet and American vessels, he said.

But in 1972, both sides agreed to limit the maneuver as much as possible following a series of collisions, including one incident in the Sea of Japan in which one U.S. ship was involved with two collisions with Soviet ships on consecutive days, he said.

The agreement was designed to avoid situations in which naval ships and planes could set off &#8220;heightened tension&#8221; with the Soviets during the Cold War, Warner said in a telephone interview.

Since the 1972 agreement, the Cold War tensions no longer exist, but Warner said he feels shouldering should still be practiced.

&#8220;There could be an isolated incident with the emerging navies of a number of nations, some of which have very few naval traditions,&#8221; he said. &#8220;Hopefully, it will never be used, but our officers and crew should understand the seriousness and the dangers involved and be trained appropriately.&#8221;

Winkler too said shouldering can still be a viable tactic.

&#8220;In the Persian Gulf, there have been incidents where the Iranian navy has come a little too close to our carrier formations and we may have needed to employ the tactic,&#8221; he said.