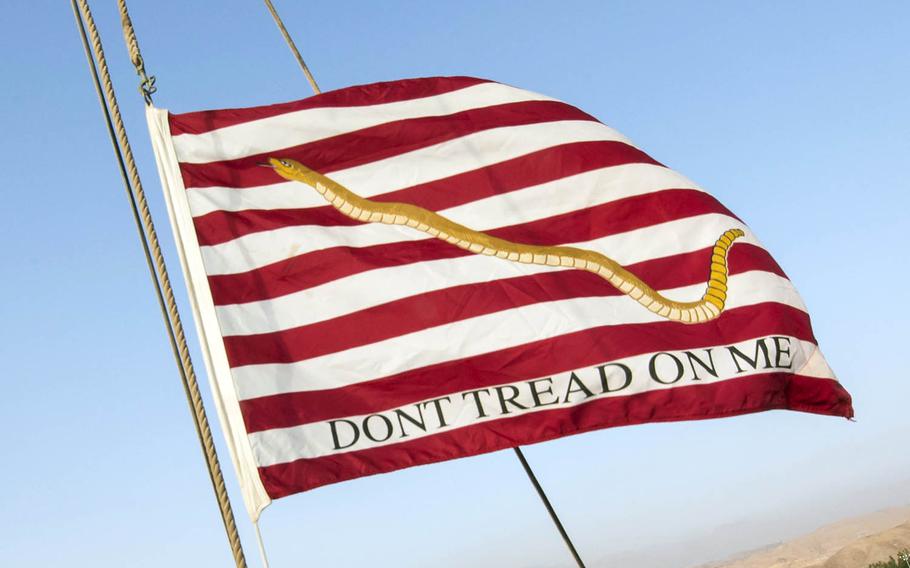 The First Navy Jack features a rattlesnake and the words “DON’T TREAD ON ME” on a red-and-white striped background. (Adam Austin/U.S. Navy photo)

The First Navy Jack features a rattlesnake and the words “DON’T TREAD ON ME” on a red-and-white striped background. (Adam Austin/U.S. Navy photo) 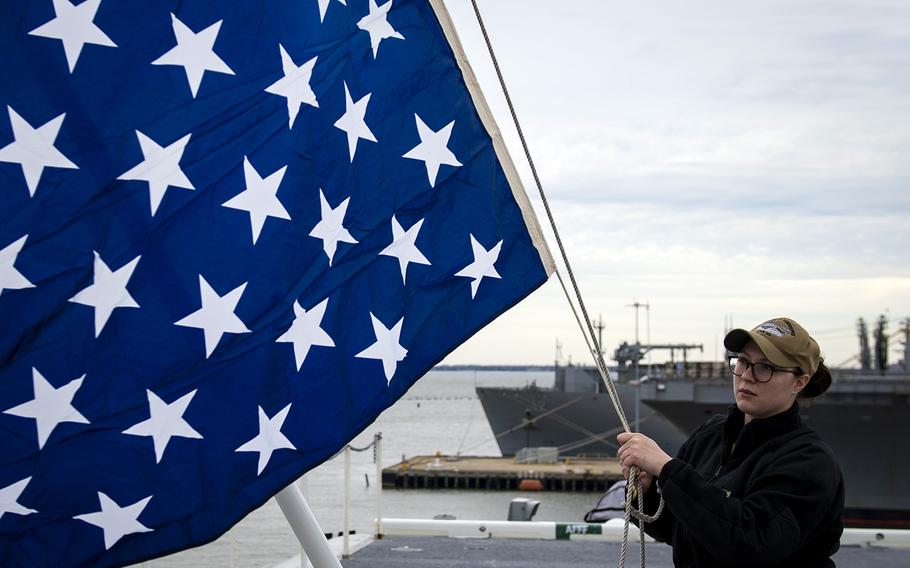 YOKOSUKA NAVAL BASE, Japan — The Navy will swap its First Navy Jack, the small flag flown from the bows of naval vessels, for the traditional Union Jack this summer to mark a “new era of competition,” Chief of Naval Operations Adm. John Richardson said in a statement Thursday.

A version of the Union Jack — today 50 white stars on a blue field — was flown on Navy vessels as early as 1777.

The Union Jack will fly on each Navy ship starting June 4, corresponding with the 77th anniversary of the start of the Battle of Midway in 1942. The Navy in its statement said the act will honor “the greatest naval battle in history.”

“Make no mistake: We have entered a new era of competition. We must recommit to the core attributes that made us successful at Midway: integrity, accountability, initiative, and toughness,” Richardson said in a Navy statement Thursday. “For more than 240 years, the Union Jack, flying proudly from jack staffs aboard U.S. Navy warships, has symbolized these strengths.”

A jack staff is a small staff on the bow from with the jack is flown.

There will be one exception, however. The Navy plans to re-establish its tradition of flying the First Navy Jack flag on the service’s longest-serving, active and commissioned ship — a title that now belongs to the 7th Fleet flagship, USS Blue Ridge.

The First Navy Jack — featuring a rattlesnake and the words “DON’T TREAD ON ME” on a red-and-white striped background — replaced the Union Jack on the first anniversary of the Sept. 11, 2001, terror attacks. A 2002 Navy directive ordered the First Navy Jack be flown on all Navy ships throughout the global war on terrorism.

“Today, terrorists threaten free commerce and individual liberty,” Cmdr. Clayton Saunders, USS Rushmore commanding officer, said at the time. The First Navy Jack, he said, represented a renewed commitment by the Navy to our first principles, to secure freedom, both at home and abroad.”

After June 4, sailors may continue to wear the First Navy Jack patch on their uniforms if they so choose, according to the Navy statement.

“The Union Jack is deeply connected to our heritage and our rise as a global nation with a global Navy,” Richardson said in the Navy statement. “The Navy is a symbol that projects American values to the world. Just as the Navy embodies the values and principles that we hold dear, our very appearance in port and at anchor communicates important messages.”