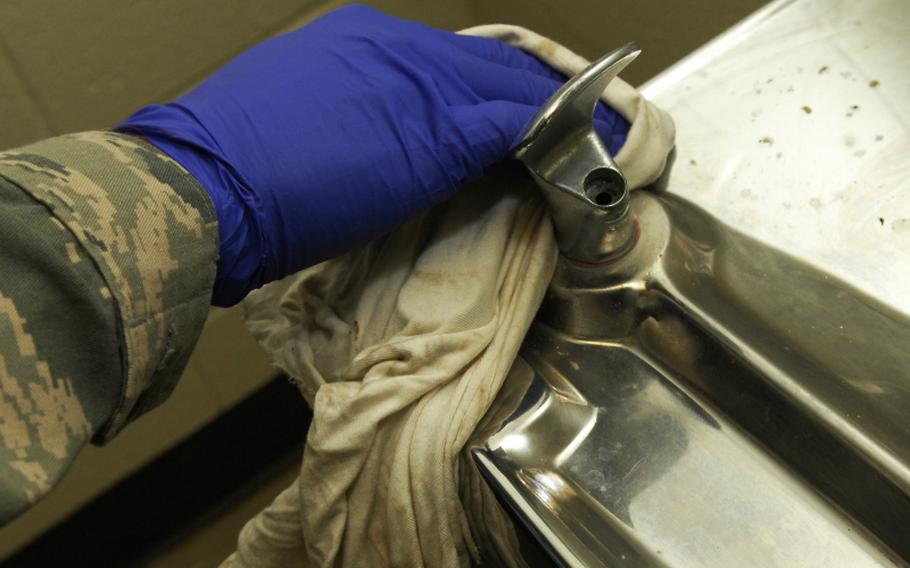 Out of more than 300 water samples that tested initially higher than the Environmental Protection Agency’s standard for immediate lead remediation this past summer, 63 tested higher than the EPA standard the second time around. Of those 63, only two remained elevated after running the tap for 30 seconds to clear the faucets of built-up deposits.

Further testing remains at the new Ikego Elementary School near Yokosuka, where 22 faucets, six water fountains and one water cooler exceeded EPA lead standards during the initial tests. Base officials are also waiting on lab results for some faucets at Sasebo.

In the majority of cases, the elevated lead levels were caused by faucets and water fountains not being used during the summer, said Bill Kavanagh, an environmental engineer with the Naval Facilities Engineering Command.

“Lead is just one of many things that comes off the piping … although lead is of major concern,” Kavanagh said.

Exposure to elevated lead levels has been linked to stunted growth and lower intelligence in children, according to the EPA. In adults, it has also been linked to brain and kidney damage, among other maladies.

Prior to the beginning of the school year, the Navy in Japan tested nearly 4,000 water sources for lead contamination. Water fixtures that tested above 20 parts of lead per billion were shut down before school started.

The Navy plans to replace the water fixtures that tested higher than that standard during initial testing, in order to be as safe as possible, Commander Naval Region Japan spokesman Cmdr. Ron Flanders said.

A federal law on lead reduction, which went into effect Jan. 4, lowers the maximum content of plumbing products with wet surfaces from 8 percent to a weighted average of 0.25 percent.

All of the new fixtures installed will adhere to the updated standard, Navy officials said Wednesday.

Bill Kavanagh, an environmental engineer with the Naval Facilities Engineering Command, recommended the following steps to prevent absorption of lead and other minerals from water supplies: