Navy restricts travel to France in wake of attacks 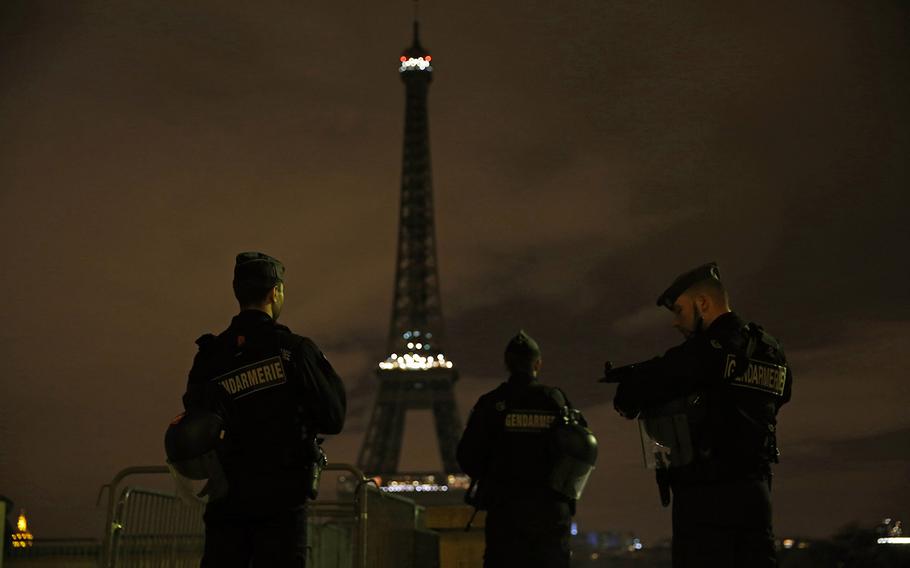 Armed police stand guard on Saturday, November 14, 2015, overlooking the Eiffel Tower, which was kept dark in honor of those who died in the terrorist attacks in Paris on Friday. France declares a national state of emergency after at least 120 people were killed in gun and bomb attacks. (Carolyn Cole, Los Angeles Times/TNS)

Navy servicemembers, civilians and contractors assigned to commands in Europe, Africa and Bahrain are prohibited from traveling to France for leave or liberty through Nov. 27, according to instructions sent by U.S. Naval Forces Europe-Africa on Saturday. Travel to Paris and a 50-kilometer radius around the city is prohibited through Dec. 4. Official travel to the country must be approved by a flag officer through Dec. 4.

Additionally, servicemembers are prohibited from wearing their uniforms while commuting to work through the same date, according to the new rules.

As the four-star component command for Navy operations in the region, U.S. Naval Forces Europe-Africa is able to release its own security guidance to personnel. It wasn’t immediately clear if joint combatant commands, such as U.S. European Command or U.S. Africa Command, were considering similar restrictions.

EUCOM was working Saturday to verify that Defense Department personnel were safe and accounted for. The command said there were no indications that military members were snared in the attack.

U.S. Army Europe asked its commanders on Saturday to account for all their personnel in the wake of the Friday terror attacks in Paris that killed more than 120 people.

The Army also is assessing whether additional force-protections measures are required, USAREUR stated.