Navy reneges on housing lease for civilian worker in Italy 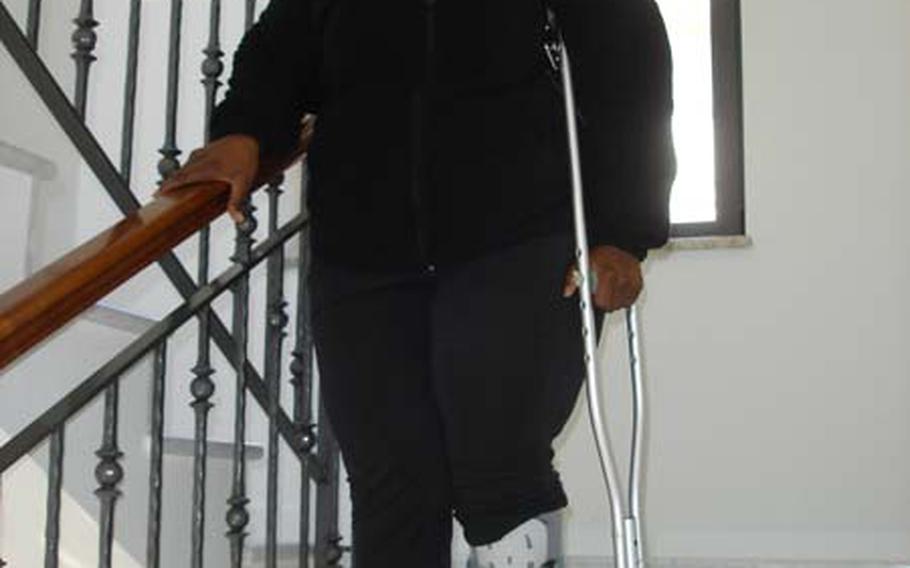 Daisy Parrish, who recently had surgery on a leg, wanted to live on base because it would be easier to get to medical appointments and physical therapy sessions. After being approved for on-base housing, Parrish was told she couldn&#39;t move, afterall. (Lisa M. Novak / S&S)

NAPLES, Italy &#8212; When the Navy decided late last year that civilians could move into some housing units on base, Daisy Parrish jumped at the chance.

Parrish, a civilian who works at the Naval Computer and Telecommunications Station, moved to Naples in 2007 and lived in the neighborhood of Lago Patria for a year. But numerous problems with house repairs and worries about crime prompted her to move to Gricignano, just outside the support site. Then, the Navy opened two-bedroom units at the support site to civilians.

So, Parrish signed a lease drawn up by the housing office. The housing office also drew up a termination letter for her current landlord, prepared the paperwork to schedule her pack-out with the personal property office and notified the Human Resource Office to stop her living quarters allowance for economy housing. Her move-in date was Friday. But last week, Parrish received a call from the housing office telling her she couldn&#8217;t move.

"I feel like the ball in a really bad tennis match," she said. "How could they do this? I have a signed lease, they prepared all the paperwork for the move &#8212; and they have all those empty apartments!"

Parrish said she never received an official notification of why she was now denied base housing. Housing officials, she said, have offered only a vague explanation saying there were some changes being implemented to the base housing policy, but those changes have yet to be announced.

Neither the housing office nor the command responded to queries about Parrish&#8217;s situation or potential changes in the housing policy.

Last November, officials began allowing single civilians to move onto the base in an effort to cut down on the high vacancy rate, particularly with the base&#8217;s two-bedroom apartments. During this time the housing office contacted Parrish to let her know she was eligible for base housing.

"I wanted to move to the base when I got here, but was told single civilians weren&#8217;t allowed," she said. "There are so many vacant apartments, and it costs the Navy more for me to live out in town than it would for me to live on base. I don&#8217;t understand why this is happening."

Occupancy well below the Navy&#8217;s mandatory 99 percent rate has plagued the support site since its construction. Most problematic are the two-bedroom units, which many say are too small. Many efforts &#8212; to include paying for sailors to move on base and transferring some units to the Navy Lodge &#8212; were implemented over the past four years to reduce the vacancies. Despite these efforts, the occupancy rate for the two-bedroom apartments as of last September was only at about 53 percent, according to housing officials.

Last month, the command announced a mandatory assignments policy to government housing for all incoming military personnel, reversing a long-standing policy of allowing residents to live in town, regardless of on-base occupancy rates.

Parrish, who recently had corrective surgery on a leg, said she wanted to live on base because it would be easier to get to her medical appointments as well as physical therapy sessions, along with easier access to other services on base. But for now, she&#8217;ll remain in her current economy housing.

"The bottom line is, I had a contract signed and executable," Parrish said. "Whatever explanation they come up with can&#8217;t compensate for my housing experience here in Naples."