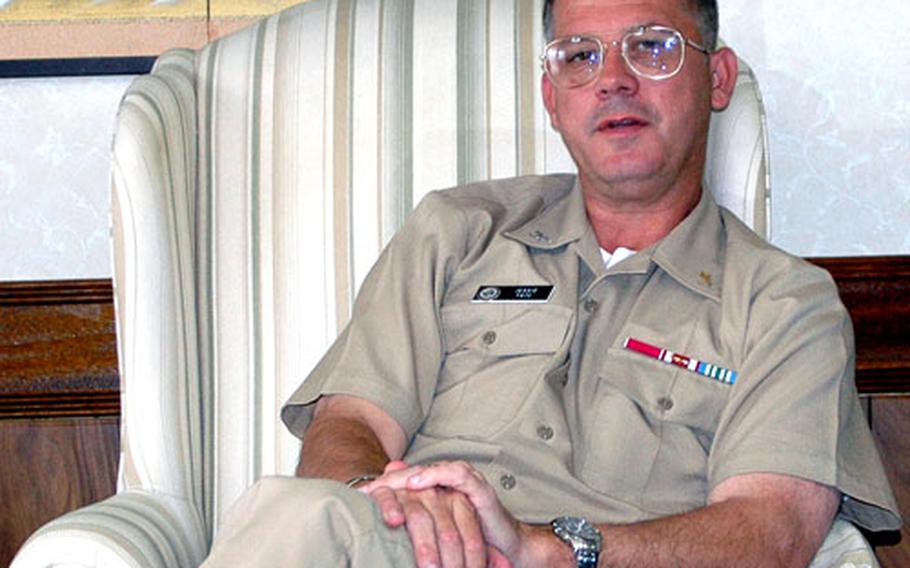 SASEBO NAVAL BASE, Japan &#8212; One of the Navy&#8217;s top-ranked chaplains, who keeps a watch on religious ministries at Navy bases worldwide, applauded the programs and improvements about which he&#8217;s heard and now has seen in the Pacific.

&#8220;It&#8217;s been tremendous everywhere I&#8217;ve stopped in the Pacific. I expect I will observe more of the same while I&#8217;m in Korea,&#8221; he added. Tate specifically lauded efforts at Yokosuka and Sasebo to program alternative events to nightlife and barhopping.

Tate said he plans to share information on programs such as Sasebo&#8217;s Reality Check for single sailors and the Alternative New Year&#8217;s Celebration at Yokosuka Naval Base with other religious ministry departments.

Efforts to reach sailors in port and developing in them a sense of community and feeling they have a home where they can fulfill spiritual needs are in the spotlight Navywide, he said. It takes funding for these quality programs, but Tate said even with costs mounting from the war on terror, the Navy is &#8220;realigning the Chaplain Corps,&#8221; not cutting back.

At CNI, a clear list of priorities has taken form for religious ministries, he said.

&#8220;We believe that religious ministry departments OCONUS (outside the continental United States) are our number one priority as we evaluate them worldwide,&#8221; he said. &#8220;The reason is &#8230; sailors and their families often have few choices&#8221; of places to attend services.

&#8220;Often, the base chapel programs are the only show in town,&#8221; Tate said. As a result, OCONUS budgets have remained intact and, in some cases, have been augmented.