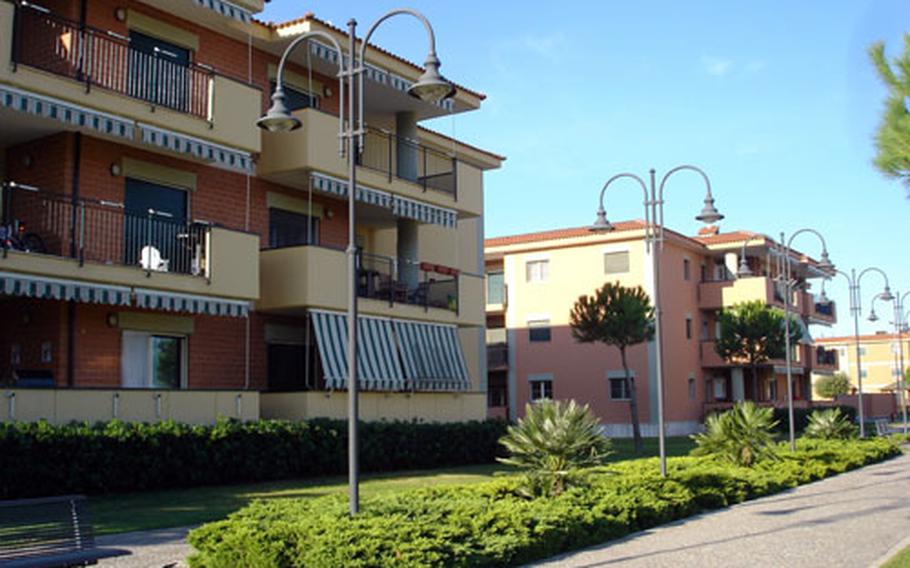 Many family housing units on the Navy support site in Gricignano remain vacant while single civilians, who would like to live on base, are barred from moving into the units. (Lisa M. Novak/S&S)

NAPLES, Italy &#8212; The Navy is paying rent on more than 100 empty base housing units on the support site in Gricignano &#8212; units that some civilians would like to rent but are ineligible for due to housing regulations designating the apartments for families only.

At the same time, the Navy is paying rents for those civilians to live off base in conditions some feel are unsafe and unsanitary.

"I live in Lago Patria where renters now have to sign a waiver acknowledging they&#8217;re aware of the escalation in crime," said Daisy Parrish, whose request to live on base was turned down in June.

In May, the Navy stopped showing rental units in Lago Patria because of a spike in home invasions, burglaries and car thefts.

Aside from crime, Naples residents also have to deal with health concerns stemming from crippling garbage strikes, contaminated soil and water, toxic dumping and noxious fumes from continuous burning of trash piles all over the city.

But the crime and trash aren&#8217;t what drove Parrish to request base housing.

"If I want something repaired in my house, it takes an act of Congress for the landlord to fix the problem. I&#8217;m tired of dealing with it," said Parrish, who is now moving to Gricignano, a few miles from the support site.

Capt. Robert Rabuse, commander of NSA Naples, said during a town hall meeting this month that since he took command in June he&#8217;s been working to find a way for single civilians to live in the two-bedroom family housing units.

If permission is granted to allow single civilians to move to the base, Rabuse said he could fill several of the vacancies on base.

Navy officials say civilians are not permitted to live on base due to funding regulations.

"Family housing funds are fenced funds," said Sandy Randolph, Naval Support Activity Naples housing director. "They are appropriated specifically for family housing and cannot be tapped into by the base or anybody else. The law says they must be used for family housing."

And family housing, according to Randolph, does not include singles.

However, low occupancy rates in 2006 led base officials to ask permission from Navy Installations Command for a "temporary diversion" waiver of 48 two-bedroom family housing units for single sailors. The request was granted, and those units are all occupied by single military personnel, as stipulated in the waiver.

"They took two separate instructions &#8212; one for family housing and one for bachelor housing &#8212; and they have combined them," Randolph said, referring to Navy Installations Command 5009.5. "If you just read it the way they have written it, and you&#8217;re not from the family housing background, you would interpret it to mean that single civilians could live in family housing. That was not their intent."

Therefore, Naples&#8217; base housing policy is based on the separation of funding for bachelor and family housing, according to Randolph.

Parrish raised the issue of single civilians living on base at the town hall meeting.

And while not everyone is looking to move to the base, some say they would like to have the option.

"The conditions with contaminated water, and the high price of utilities in winter make the base seem like a better choice," said Taeko Yoshino, a single civilian employee who lives in Monteruscello. "When you hear of high-profile crimes, like the mafia killings in Castel Volturno, it would be nice to have the choice to live on base where it&#8217;s safer."