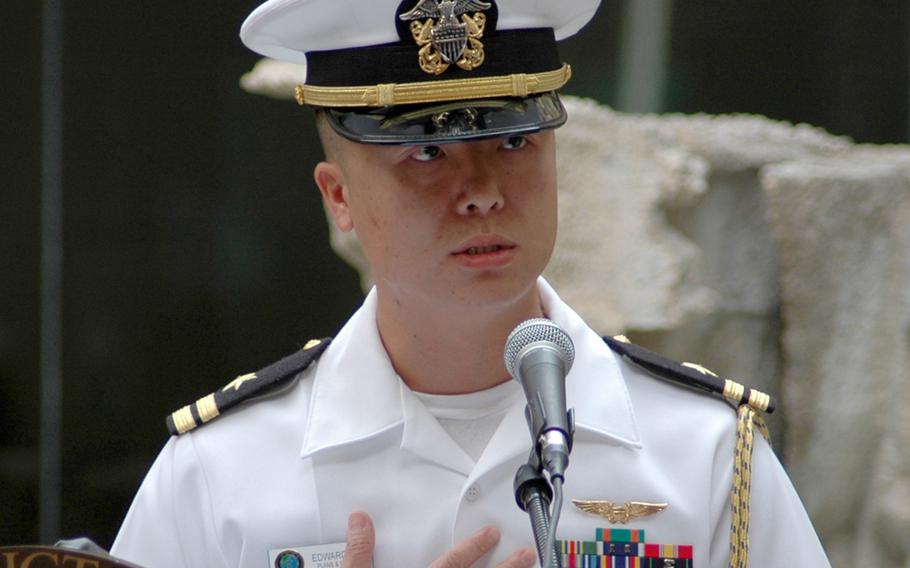 WASHINGTON — The Navy has recommended that espionage charges against Lt. Cmdr. Edward Lin proceed to a general court-martial, though it has dropped prostitution and adultery charges that the once-fast rising officer faced, a service spokesman said Friday.

After considering evidence presented at an Article 32 hearing last month, U.S. Fleet Forces Adm. Philip S. Davidson made the recommendation that the case should proceed to general court-martial on May 10, said Lt. Cmdr. Timothy Hawkins, a Navy spokesman. Lin will be arraigned at Naval Station Norfolk on May 17.

Lin, 39, faces espionage charges stemming from his Sept. 11, 2015 arrest by Naval Criminal Investigative Service agents and his subsequent two-day interrogation at a Honolulu airport. He had been subject to a two-month investigation prior to his arrest. According to the charges, Lin is accused of meeting five times with an undercover Mandarin-speaking FBI informant and providing what federal prosecutors allege was classified information intended to aid a foreign government.

The Article 32 hearing also included charges of prostitution and adultery, but the Navy has decided to dismiss the charges without prejudice, meaning they will not be part of the general court-martial but Lin still could face other administrative punishment for them.

Defense attorneys for Lin, who is accused of spying for China and Taiwan, have challenged the case against him, saying the classified information in question is available on the Internet and the interrogation that led to most of the charges was unlawfully conducted.

An 80-minute audio recording of the unclassified portions of Lin’s Article 32 hearing, which took place April 8, was shared last week with reporters. The hearing was convened to determine whether the Navy would recommend some or all of the charges against Lin be referred to a full court-martial, a lesser administrative punishment or possibly dismissed.

Recommendations from the hearing were provided to Davidson on April 26, Hawkins said.

During the Article 32 hearing, prosecutors presented two binders of information, one classified and one unclassified, containing 45 pieces of evidence including transcripts of an 11-hour interrogation at the Honolulu airport that they said supported charges against Lin.

“Given the magnitude” of the charges against Lin, Navy Judge Advocate General Cmdr. Johnathan Stephens said at the time, the only appropriate recommendation “is general court-martial.”

Lin’s defense attorney said most of the evidence from the interrogation, during which Lin admitted to many of the charges brought against him in the Article 32 hearing, should not be allowed because the NCIS agents did not read Lin his rights during the questioning at the airport.

Youngner also said the information that Lin is charged with providing was available through open sources.

The interrogation at the airport was the basis for a warrant that searched Lin’s emails dating back to 2012.

Lin was born in Taiwan and became a naturalized U.S. citizen in 1998, according to a website set up by his family. He joined the Navy in 1999 and spent his career in maritime intelligence and reconnaissance, operating the P-3C Orion, an aircraft specialized in detecting submarines.