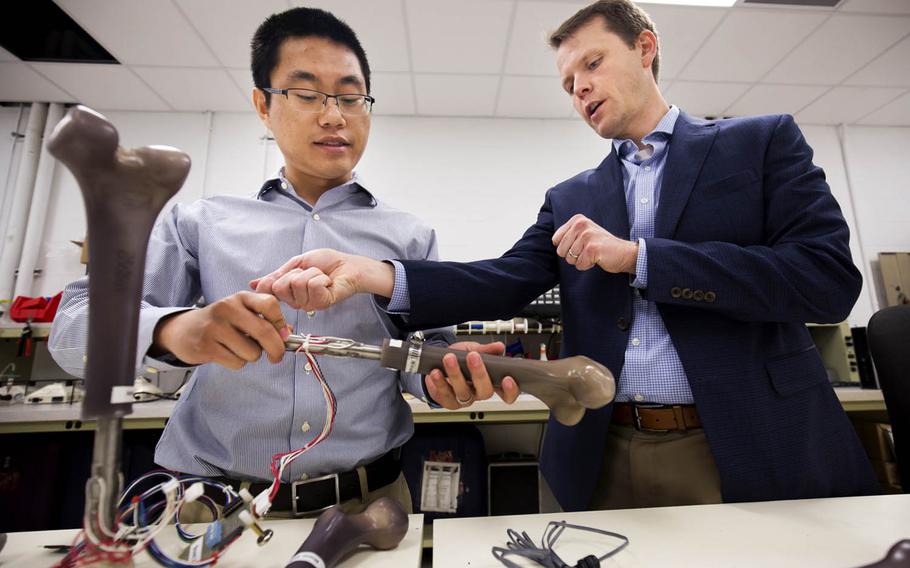 Jerome Lynch, right, an engineering professor at the University of Michigan, discusses the results of an experiment with research fellow Wentao Wang, Sept. 27, 2017. The Office of Naval Research is sponsoring Lynch's work as part of the Monitoring OsseoIntegrated Prostheses program, whose aim is to create a "smart" artificial leg equipped with specially designed sensors to monitor walking gait, alert users to prosthetic wear and tear, and warn of potential infection risk. (Joseph Xu/University of Michigan)

CAMP FOSTER, Okinawa — It seemed like science fiction when the first prosthetic leg was surgically implanted in a post-9/11 veteran two years ago in Utah. Now, thanks to a program led by the U.S. Navy, scientists are on the verge of advancing those prostheses even further.

In 2016, the Office of Naval Research partnered with Walter Reed National Military Medical Center, the Naval Research Laboratory and several universities to launch Monitoring Osseointegrated Prostheses, a program whose mission is to “advance prosthetics into the 21st century” using the latest biomedical and engineering technologies.

MOIP focuses on improving socket-style devices and implanted prosthetics — called percutaneous osseointegrated prostheses — which feature a titanium rod that is surgically implanted into the bottom of the femur and exits the body where it can be attached to a prosthetic device.

The program’s charge is broad, and progress is being seen in a multitude of areas, from synthetic immune systems that search and destroy infections to sensors inside the body that measure healing, prosthetic strength, stress and walking gait and upload this information to doctors.

Researchers have seen success in labs across the U.S. and could be less than a year away from a polished prototype, though additional advances may be announced soon. They say that the technology will revolutionize prosthetics, for injured warfighters and civilian amputees around the globe.

“It is in the early development stage but this is an intelligent prosthetic system,” said Liming Salvino, a program officer in ONR’s Warfighter Performance Department. “MOIP not only can improve quality of life, but also usher in the next generation of prosthetic limbs.”

Most of today’s modern prosthetics are socket style, where the soft tissue of the amputated area is placed within a cradle of sorts and fastened.

Veterans often complain that these cause friction and can be painful to wear, which can lead to sores and blisters or an awkward walking motion. Sockets can also lead to skin infections.

In addition, the sockets need to be constantly adjusted, which can be costly. Navy researchers said for these reasons, a lot of amputees give up prosthetics for wheelchairs.

Two years ago, two Iraq War amputees received the first implantable prosthetic legs through a Food and Drug Administration trial at the Department of Veterans Affairs hospital in Salt Lake City. The trial is ongoing and has been expanded to include more veteran amputees.

The osseointegrated prosthesis is a vast improvement, yet challenges remain. The rod fuses with the bone, but there is still space where it exits the body that was susceptible to bacteria.

“Osseointegrated prosthetics have lots of advantages but they are more complex and more expensive and they don’t work for everybody, so it’s kind of a choice,” said Timothy Bentley, a force health protection program officer involved with MOIP. “The right person should get an [osseointegrated] prosthetic but other people will have sockets and they can be improved too and our efforts are looking to support both of those.”

One of the major focuses of the program is structural health, a field in which Salvino has expertise. Modern bridges and airplanes have sensors built into their construction that monitor stress and collect data on use and behavior to better inform maintenance crews and engineers aiming to improve construction techniques.

Bentley said they can use 3-D printers to make sensors and better-fitting sockets.

The team is also working to develop a skin to help close gaps between the soft tissue and the implantable prosthetic, and to find a way to relay data from within the body to the outside, which would likely mean a handheld scanner or device.

Perhaps most exciting, Bentley said, is the primitive synthetic immune system they are developing for the implantable prosthetic inside the body. Sensors inside or on the prosthetic would detect bacteria, infection or dead tissue. They would then alert doctors before it became a major issue, release a chemical response or kill the bacteria with small volts of electricity.

“The eventual goal is to have the sensor itself sense bacterial growth and then respond with an electrical stimulation that either kills or drives the bacteria away,” Bentley said.

So far, there are eight projects that will be rolled out in stages, Salvino said. MOIP is working with a medical device company to create a polished prototype while researchers continue to tweak their projects. The next step, Salvino said, is to reproduce results from the lab testing with a device that can be put on an amputee.

“We’re all rolling together to make a real difference in the way people can live their lives,” Bentley said.