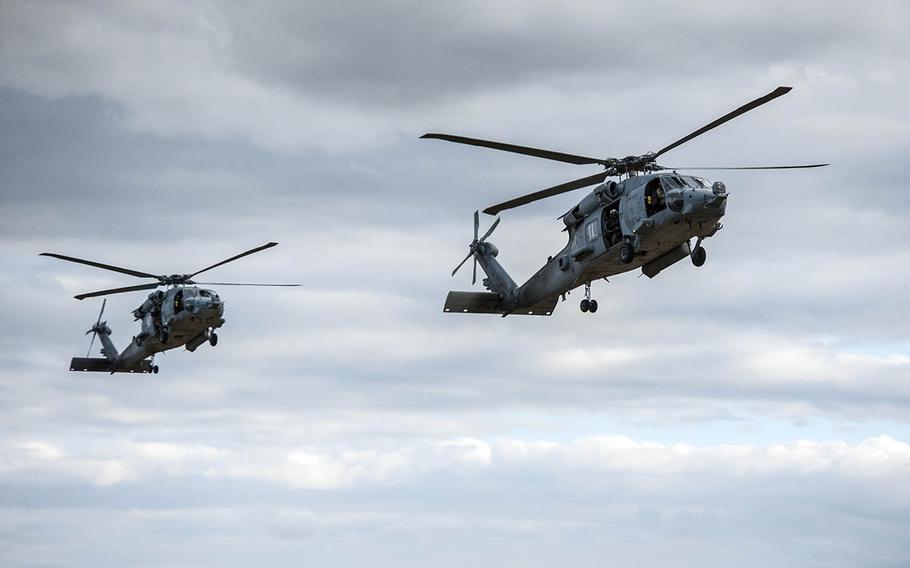 CAMP FOSTER, Okinawa — The Navy is investigating what caused an HH-60H Seahawk helicopter to crash into another on an Okinawa runway earlier this month.

The incident between two Seahawks from Helicopter Sea Combat Squadron 85 happened at Kadena Air Base on Oct. 9, Navy officials told Stars and Stripes on Friday. Details were scarce because the investigation is ongoing.

There were no injuries, but initial damage estimates compelled the Navy to report the incident as a Class A mishap, which means damage was either more than $2 million or at least one of the aircraft is a total loss.

“The investigation will determine why and how this happened and the full extent of the damage,” said Naval Air Forces spokesman Cmdr. Ron Flanders. He said all estimates on damages were preliminary and that it is possible the incident could be downgraded after closer inspection.

Flanders could not say how many Seahawks are deployed to Okinawa, because of operational security concerns.

The incident is the Navy’s second Class A mishap this fiscal year, which began Oct. 1, according to data provided on the Naval Safety Center’s website. On Oct. 4, an F/A-18F Super Hornet made an emergency landing at Naval Air Station Lemoore, Calif., after a right engine caught fire during training. There were no injuries.

And it’s the second Class A mishap this calendar year for Helicopter Sea Combat Squadron 85, which is based at Naval Air Station North Island in Southern California. In July, Petty Officer 1st Class Jonathan Richard Clement, 31, was killed and another crewmember was injured when a fuel tank detached from a helicopter and landed on them. That incident remains under investigation.