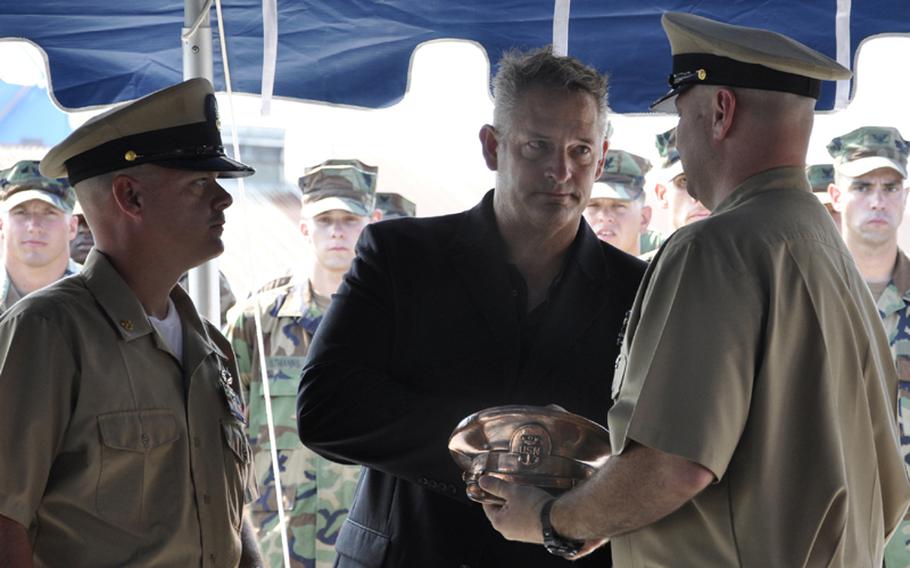 Retired Chief Petty Officer and Navy SEAL Kenneth Stethem receives a bronzed master chief petty officer cover from chief petty officers Dan Mayfield and Jeff Kuhlman aboard the USS Stethem at Yokosuka Naval Base on Tuesday. Stethem accepted the honor on behalf of his brother and ship namesake Robert Dean Stethem, who was posthumously promoted from petty officer 2nd class to master chief petty officer during the ceremony. Robert Stethem was killed by Hezbollah hijackers aboard TWA Flight 847 as he was returning home from a deployment in 1985. (Geronimo Aquino/Courtesy of the U.S. Navy)

YOKOSUKA NAVAL BASE, Japan &mdash; Decades after hijackers took his life, the namesake of the destroyer USS Stethem was promoted to master chief petty officer in a ceremony aboard the ship here Tuesday.

Petty Officer 2nd Class Robert Dean Stethem was posthumously promoted 25 years after Lebanese hijackers aboard TWA Flight 847 singled him out because of his military status, killing him when their demands were not met.

Months ago, the USS Stethem commander, Cmdr. Hank Adams forwarded the promotion request to the master chief petty officer of the Navy after the ship&rsquo;s chiefs&rsquo; mess recommended the honor, the news release said.

Robert Stethem, 23, a Navy Seabee diver, was returning from an assignment when his flight was hijacked by Shiite Muslim extremists of Hezbollah, or &ldquo;Party of God.&rdquo; He was shot in the head and thrown on the tarmac at Beirut International Airport in Lebanon.

One of the hijackers, Mohammed Ali Hamadi, was arrested in 1987 at Frankfurt Airport in Germany. He was convicted in a German court of Stethem&rsquo;s murder in 1989 and sentenced to life in prison with a possibility of parole after 15 years, according to The New York Times. He was released from prison in 2005

Hamadi&rsquo;s release came days after a German archaeologist, Susanne Osthoff, was freed after being held by an Iraqi group. German authorities denied a link between the two events.

Three other hijackers were indicted and added to the FBI&rsquo;s Most Wanted List. One of them, a high-level Hezbollah commander named Imad Moughniyah, was killed in 2008 following a bomb attack in Damascus, Syria, according to media reports.