'I didn’t want to start a war' 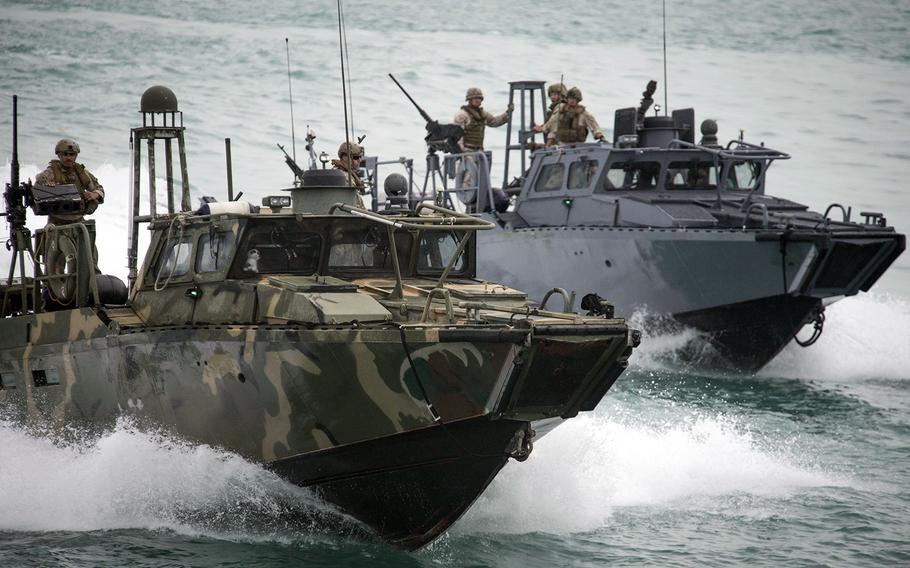 Riverine Command Boats 802 and 805 participate in a bilateral exercise with Kuwait naval forces in the Persian Gulf, on Nov. 3, 2015. (Torrey W. Lee/U.S. Navy)

WASHINGTON — The engine on one of the two Navy patrol craft was broken before it ever left port. The crews had failed their most recent navigation exams. The radios weren’t working. None of the 10 sailors on either vessel had ever participated in a mission this long.

They were sent anyway. And when the chips were down the crews displayed a lack of "war-fighting toughness," according to an in-depth Navy investigation of the incident released Thursday.

Those failures were only some of the many problems revealed by the Navy’s investigation into the capture of two riverine command boats by the Iranian Revolutionary Guard Corps in January. The boats were supposed to sail from Kuwait to Bahrain, but they ended up just 1.5 miles off Iran’s Farsi Island instead. The nine U.S. male and one female sailors aboard were detained overnight and interrogated by their Iranian captors.

The fallout from the incident has already resulted in the removal of the commodore and executive officer responsible for the vessels, Capt. Kyle Moses and Cmdr. Eric Rasch.

A third officer who was in charge of the detachment in Kuwait, who was not named, was also relieved of command, Chief of Naval Operations Adm. John Richardson announced Thursday in a news briefing on the investigation findings. Disciplinary proceedings are underway for six other Navy personnel involved in the incident, he said.

"Big incidents like this are always the result of an accumulation of a number of small problems,” Richardson said. “When you start living with problems as this team in Kuwait started to do – and you saw it in the training, in the materiel – you never know how these things are going to combine at exactly the wrong moment and result in a bigger incident like this.”

The overnight detention from Jan. 12-13 became an international incident just as Iran and the United States were finalizing a deal to limit Iran’s nuclear weapons program. Images of the sailors on their patrol craft, hands on their heads and surrendering their weapons after they entered Iran’s territorial waters, and the subsequent footage of the most senior member of the detained crew apologizing for their actions heightened tensions that threatened to jeopardize the nuclear deal. It took intervention of Secretary of State John Kerry to secure their release.

On Thursday, the Navy released hundreds of pages of documents revealing some of what went wrong and lead to the capture. The documents also included an explanation for a controversial apology made by one of the captains on behalf of the crews that was broadcast worldwide via Iranian television. The investigation also found an act of bravery among one of the crew, the female sailor, while on her knees with a gun to her head and blindfolded, managed to hit the boat’s emergency beacon to call for help.

The two craft, Riverine Command Boats 802 and 805, left four hours late for their mission because they could not get their radios to work. The night before, boat 802 had engine failure and wasn’t ready. The boat crews “worked late into the night on Jan. 11, 2016 and in the morning of Jan. 12, 2016 to prepare and repair the two [boats] for a nearly 250 nautical mile transit in the open ocean,” the investigation found.

Crews are supposed to get a required number of hours of rest before a mission like this, but neither boat captain slept that night.

Several of the crew, including both captains, had either recently failed or not taken a required navigation exam and none of the crew had more than two hours of training on the navigation system. Boat 805 never bothered to log their route. Neither captain looked at a paper map before departing, though it is required.

The crews had already voiced their concerns: they weren’t ready for this mission. It would be the longest mission they’d conducted, and would require a nighttime refueling – another thing that they’d never done.

Moses’ response: “Navigation is navigation,” the report found. They would attempt the Kuwait to Bahrain mission anyway.

The task force commander voiced his concern. Moses responded the boats had done similar a mission in another region; this one should be no different.

“Because an [riverine command boat] is a boat and a boat floats,” Moses told the task force commander.

When they were delayed four hours by their unresponsive radios, their concerns escalated. They worried about missing their refueling.

Then they got underway.

“From the moment [river command boats] 802 and 805 got underway, [boat] 802 course from the plan of intended movement to expedite meeting with USCGC Monomoy to refuel before sunset, and did so without giving notice or getting permission,” the report found. Boat 802 was the lead boat.

Their new track led them directly for Farsi Island.

About an hour before their detention, the crews saw the island and other features that they wondered about, though they did not realize they were in Iranian territorial waters.

At the critical moment when the navigation system identified Iran’s Farsi Island for them, none of the 10 picked up on that information because no one zoomed in on the island that the system was displaying. They also didn’t look at backup navigational charts on the boats or call in their location to one of their maritime operations centers.

One crewmember did pick up his personal smartphone. The application on the phone that he used “displayed a long Arabic name” about the island, but no other information.

The crews thought they would go around the island. But boat 802’s engine experienced a dangerous oil pressure drop, and cut speed. Boat 805 also dropped speed and came alongside.

Boat 802’s engine problems could have been fixed with the boat still moving, but the crew decided to stay put and fix the issue there. Despite the fact that they still had a visual on an unknown island and did not know their exact location, the boat captains did not have their gunners on watch to protect the craft while the repairs were under way.

At 1,000 yards, the captain of boat 802 saw the incoming vessels had weapons. But he still did not tell his crews to take a defensive posture. He would later say he thought the vessels might have been friendly, from Saudi Arabia.

By the time the vessels were within 100 yards, the two U.S. boats manned their guns.

Then they saw the blue flag of the Iranian Revolutionary Guard Corps. The U.S. crews started yelling, trying to communicate by pointing to their wrench and engine that they were broken down. This wasn’t an incursion. By then, two additional Iranian vessels were headed toward them.

The U.S. boats did not engage in self-defense, one of the many faults found in the aftermath of the incident. The captain of boat 802, who was a young lieutenant, did order the boats to speed away. But by then it was too late, the Iranians were able to block their vessel and had their weapons fixed on boat. The crew’s coxswain saw the Iranian’s AK-47s were close enough for him to see they were pointed at his gunner. When the captain wanted another attempt to go, the coxswain said no.

The boat 802 captain, the lieutenant, was the most senior officer present and, at that point, he started negotiating with the Iranians.

“So at that point in time if I had decided to start a firefight, I know a lot of my guys would be dead. We might have all been dead at that point in time. I didn’t want to start a war with Iran, either … my thought at the end of the day was that no one had to die for a misunderstanding. And that, I guess, was a gamble on my part. I don’t want to say gamble because that is not exactly the right word, but in allowing us to be captured – that was my decision and my decision alone.”

The crews raised their hands and kneeled. The boats were boarded. Once on board, the Iranians tore down the U.S. flags and replaced them with their own.

As they were filmed kneeling and bound, the female gunner on the crews activated the distress signal. The Iranians discovered her actions, and confiscated the device.

The detention and its aftermath are well known and played out on cable news for days. The crews’ weapons, computers and phones were confiscated. Iran went through the boats looking for classified material. The crew spent the night in a room getting filmed as the Iranians fed them, then interviewed them for propaganda purposes. Shortly after lunch the day after their capture, they were released.

What the investigation found the captain of boat 802 should have had his crew in a defensive posture while the downed vessel was getting repaired. It did not rule on his decision to surrender the boats to the Iranians, noting the Defense Department’s Code of Conduct does not clearly outline what actions an officer should take in regards to surrender if the situation occurs in non-armed conflict.

When they were being interrogated by the Iranians and asked what their real mission was – because their captors did not believe these two small vessels were capable of making the Kuwait to Bahrain transit, the detained crew laughed and said: “Yeah I wish you could tell my people that because we told them these boats can’t do that.” The report found that while the crews thought they might be building camaraderie with their captors, it faulted them for doing so under filming circumstances that could have been used for propaganda.

The investigation also found the captain of boat 802 acted honorably by directing the Iranians not to film his crew, but his filmed apology “was clearly inconsistent with the Code of Conduct.” Though the boat captain filmed the apology after initially resisting, and after the Iranians said it was the only way the crews would be released, his choice to do that was also inconsistent with the Code of Conduct, the Navy found.

The investigation found the captain of boat 802 failed in many of the expectations that the Navy had of him. But the Navy also reported the lieutenant’s relative inexperience, low rank at the time and the extreme situation should be put in the context of the lack of oversight or mentorship his commanders had afforded him.

Last, it found the female gunner should “receive proper recognition for her extraordinary courage in activating the emergency beacon while kneeling, bound and guarded at Iranian gunpoint, at risk to her own safety.”