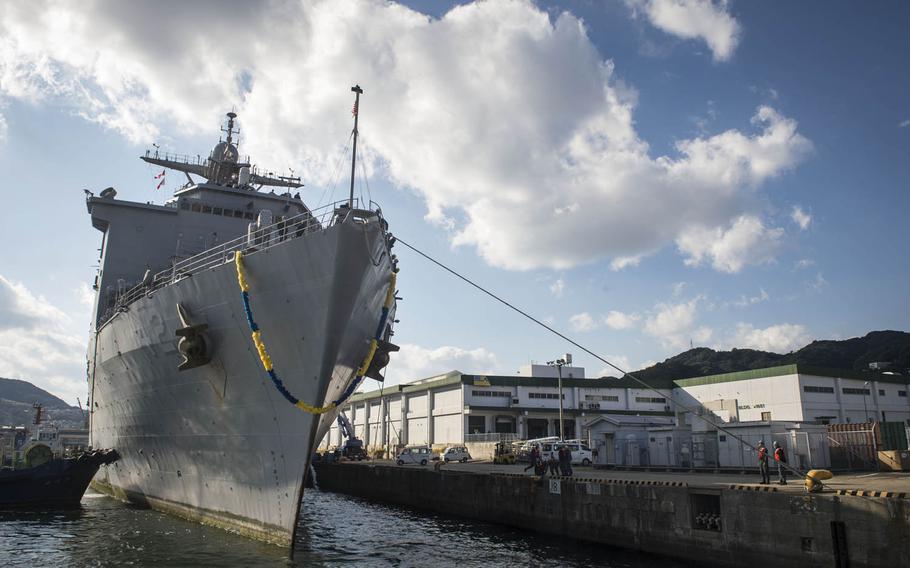 The amphibious dock landing ship USS Germantown docks at Sasebo Naval Base, Japan, after completing a patrol in 2014. The Navy plans to revamp its pier-side power facilities at Sasebo to accommodate advanced warships expected to roll off stateside assembly lines in the coming years. (Raul Moreno Jr./U.S. Navy)

CAMP FOSTER, Okinawa — The Navy plans to revamp its pier-side power facilities at Sasebo Naval Base on the southern Japanese island of Kyushu to accommodate advanced warships expected to roll off stateside assembly lines in the coming years.

The announcement was made in the draft fiscal 2017 budget released by the Navy earlier this month. Modernization upgrades at Sasebo’s Juliet Basin pier were budgeted at $16.42 million.

“These upgrades … will allow the base to continue to support forward deployed and port visits for many different classes of the Navy’s most advanced warships,” said Darian Wilson, a U.S. Naval Forces Japan spokesman.

The Navy will work closely with Japan to plan and announce any changes to the Navy’s forward deployed presence in Japan, he added.

Japanese Minister of Defense Gen Nakatani said last week that he had not received information about the Navy’s fiscal 2017 budget request, and that he would explain it to the general public when that happens.

Sasebo Naval Base is a small joint-use facility with a protected, deep harbor that hosts both Navy and Japan Maritime Self-Defense Force personnel and vessels. The base is home to most of the 7th Fleet’s amphibious vessels, including the USS Germantown and the USS Bonhomme Richard.