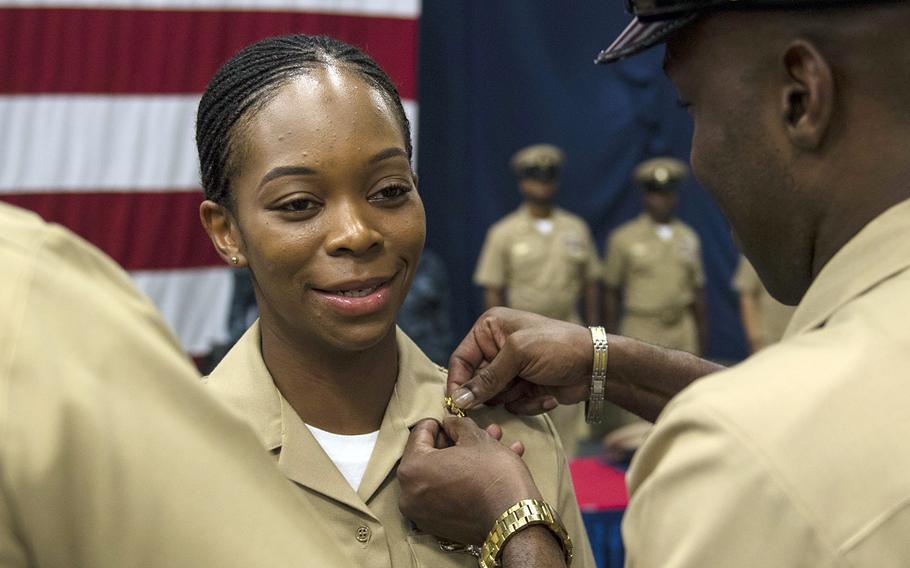 A sailor is promoted to the rank of chief petty officer during a pinning ceremony aboard the USS Iwo Jima, Sept. 16, 2017. (Joe Gonzalez/U.S. Navy)

YOKOSUKA NAVAL BASE, Japan — Sailors can expect more promotions and re-enlistment bonuses as the service starts growing again, according to the Navy’s personnel chief.

Vice Adm. Robert Burke, who also serves as deputy chief of Naval Operations, told sailors at the 7th Fleet headquarters in Japan this week that the days of pushing sailors out early are over.

“All of our people policies have been aligned towards pushing people out of the Navy … we’ve always needed to get smaller,” Burke said.

Now the Navy will make it harder to leave, he said.

“Advancement opportunities are going go through the roof,” he added.

A fundamental problem is that the Navy doesn’t have enough sailors to man all its ships, Burke said.

“Increasing the number of platforms is a very important part of naval power,” he said. “The [National Defense Authorization Act] talks about 355 ships as the target and we’re going to do everything we can to get there. There is a near unanimous consensus that we need more naval power than we have now.”

The Navy plans to reach its goal by increasing the number of new sailors and retaining those already in uniform, Burke said.

Lack of funding had pushed the service into hard choices but now the Navy needs an influx of sailors to fill gaps on ships, he said.

“To get ourselves out of the manning deficit we have right now, we need 11,000 more people in the Navy by FY23,” he said.