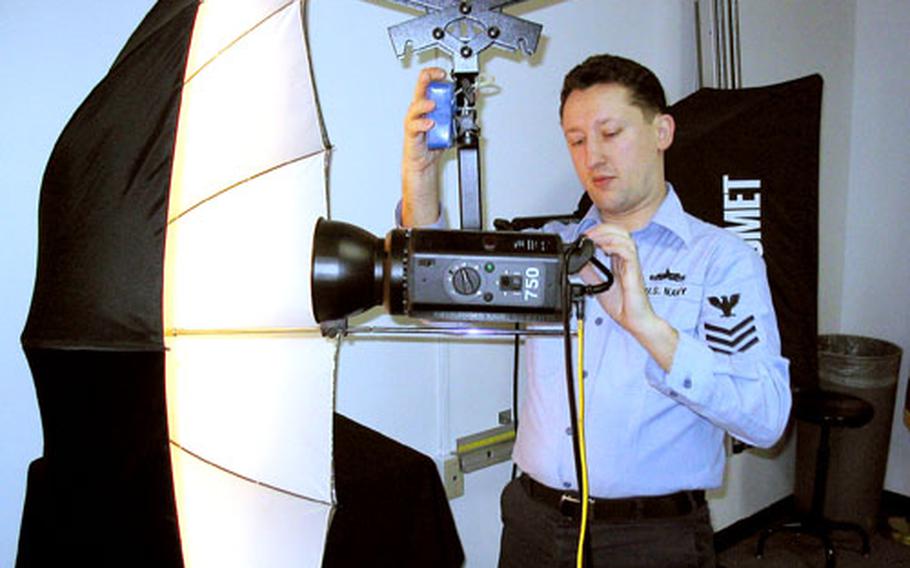 SASEBO NAVAL BASE, Japan &#8212; Some Fleet Imaging Facility Pacific services are being curtailed as the Navy prepares to close individual departments across the Pacific by November and merge them into one office.

Chief Petty Officer Spike Call, officer-in-charge of the Naval Air Facility Atsugi FIFP, said the Navy&#8217;s FIFP departments at Atsugi, Sasebo, Misawa Air Base, Yokosuka Naval Base and Kadena Air Base on Okinawa are shutting down this year.

The closure and realignment of imaging centers is an order from Naval Air Forces, Pacific in San Diego. The merged functions will be performed at one central location. In Japan, Call said, &#8220;it will be Fleet Public Affairs Center at Yokosuka. The center will be staffed by sailors with mass communications specialist classifications.&#8221;

Additonal funding already has been halted about nine months before the imaging facilities close.

&#8220;We are doing this only because of budget limitations and realignment that comes straight from AIRPAC,&#8221; he said.

As far as the rating merger is concerned, &#8220;Everybody will be in the same basket because of the similarities in some of their skills and also because they use many of the same, or similar, tools, such as Photoshop, layout and design programs and computers,&#8221; Call said.

&#8220;There&#8217;s going to be quite a learning curve at the very first,&#8221; Phelps added. &#8220;I think the journalists and photographers have had enough in the way of common skill experience that at first they should have an edge and flexibility that maybe the lithographers and draftsmen won&#8217;t as they initially come into the classification.

&#8220;However, as the curriculum is enhanced and evolves, and new grads begin coming in having learned the basics in each area of expertise rather than just one rate, then those people will begin to have the edge.&#8221;

To prepare for the end, on Jan. 1 the Fleet Imaging Facilities tweaked their menu of services:

Official roster portraits no longer are supported except at the flag, unit commander, executive officer and command master chief petty officer levels, with no exceptions.Official full-length photos required for boards or service records will continue until the current inventory of supplies is depleted.Passport, visa and isolated personnel report (ISOPREP) photos will continue until the current inventory of supplies is depleted.Immigration and naturalization photos are not supported.Award ceremonies, presentations, frocking, host nation gift exchanges and medal presentations no longer are supported.Command group photos no longer are supported unless determined to have historical value in the judgment of the imaging facility leadership.Change-of-command ceremonies, retirements, commissioning and re-enlistment events will be covered until the offices close in November.Photographic support for Naval Criminal Investigative Service and Base Security requests will be handled as requested.&#8212; Stars and Stripes