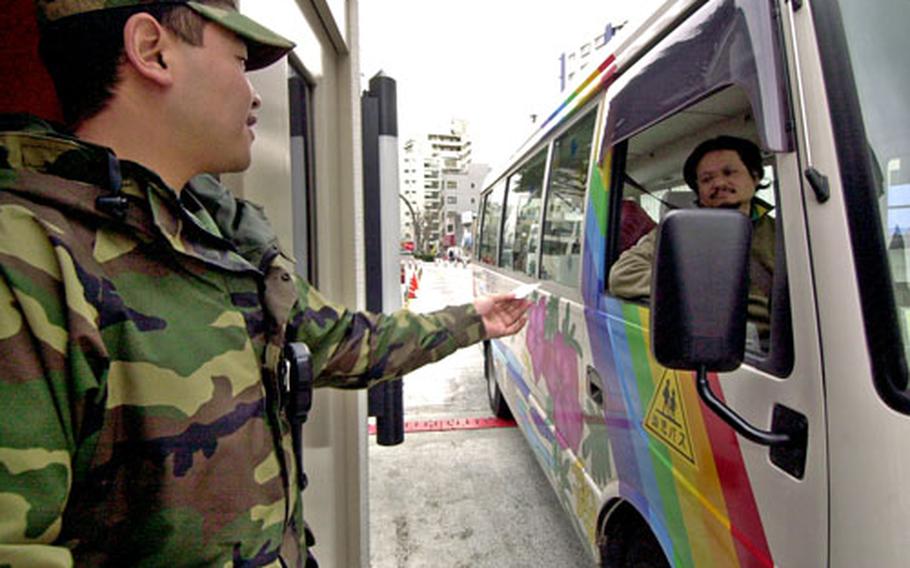 A new Navy program under consideration would eliminate more than a third of the Navy&#8217;s police billets in Japan in the coming months, freeing up almost 350 sailors for deployments to the Middle East and Africa, said Lt. j.g. Michael McPhearson, regional force protection officer for Commander, Naval Forces Japan.

Under the proposal, made last month by the commander of naval installations, those positions would be filled by Japanese master labor contract employees as well as new civilian contractors.

In the proposal, 135 civilian contractors would be hired for Navy bases in Japan and at Diego Garcia, which falls under CNFJ. About 200 more MLCs also would be used at the Japan bases, including Misawa Air Base, where naval forces supplement Air Force security and law enforcement.

It&#8217;s not clear how soon the plan might happen, although it could be three to six months, McPhearson said. The change-over could evolve over time through attrition &#8212; each time a Navy master-at-arms returns to the States, a contractor would replace him or her. Or it could happen all at once, although that&#8217;s not likely, officials say.

The plan, called the &#8220;Workforce Transformation Strategy&#8221; is designed to free up uniformed servicemembers for military-specific roles. The Army recently transformed many of its jobs &#8212; such as postal workers &#8212; to civilian workers under a military-to-civilian conversion program.

The change would provide more uniformed Navy personnel to work in prisons or other law-enforcement activities to support overtaxed Army and Marine Corps units in the Central Command under the Individual Augmentee Program.

Back in Japan, the change could mean many things &#8212; more civilian job openings, more work for the remaining Navy masters-at-arms and a different type of security officer coming to your door in an emergency.

The contractors may not have many of the servicemembers&#8217; extra duties &#8212; flag raising, volunteer cleanups and standing watch.

Civilian contractors and MLCs also don&#8217;t fall under the Uniform Code of Military Justice, don&#8217;t work overtime for free and simply can quit their jobs if something isn&#8217;t to their liking.

The plan has two caveats, he said: The changes cannot erode security or service, and regional commanders must retain control over the security elements, uniform or civilian.

Although it could pose its own set of problems, the plan makes sense for the Navy, in light of global operations and cost, Bough said.

Similar changes are occurring at other overseas locations, including South Korea and Bahrain.