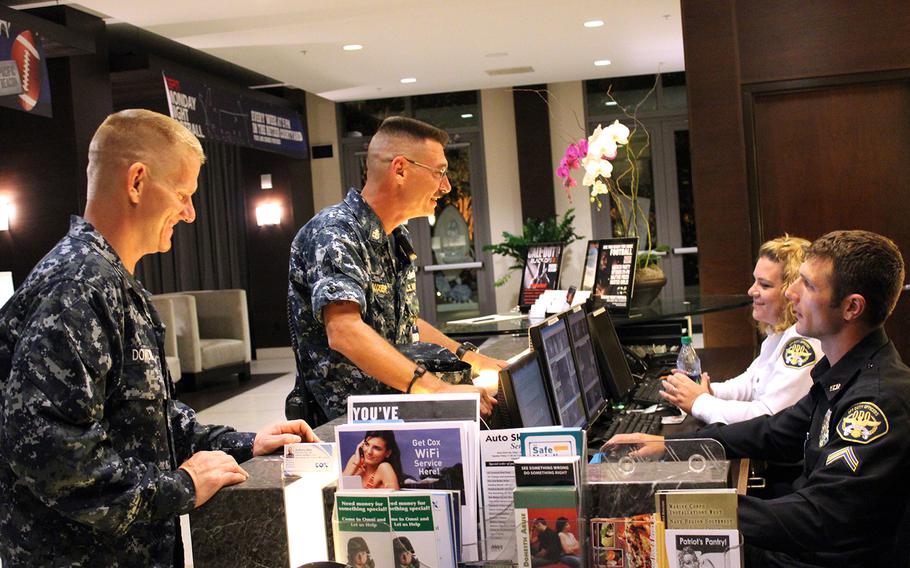 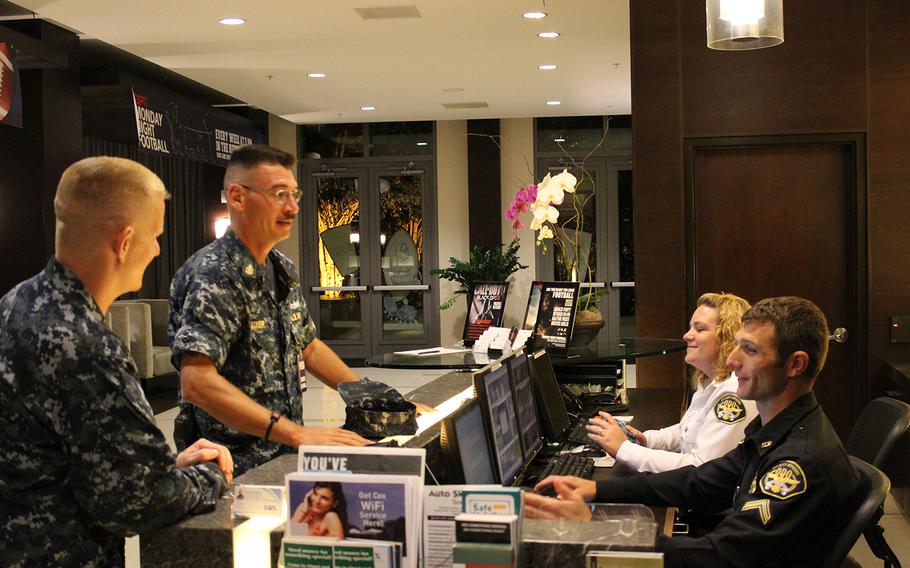 SAN DIEGO — As the Pentagon and the military services grapple with what appears to be a skyrocketing number of sex crimes within the ranks, the Navy has quietly been working on an extensive program it says has reduced the most serious sexual assaults by more than 60 percent at its largest training base — a decrease that has held for more than two years.

Now, the Navy is taking the lessons learned from that program and implementing the applicable parts of it across the fleet.

At Naval Base San Diego, that means specialized mandatory training and small-group discussions; reaching out to police, local colleges, hotel and bar associations and the local gay and lesbian community; new rules on alcohol sales; and nightly patrols of the areas around the barracks.

Chief Petty Officer David Auxier went on the first such patrol at the San Diego base in February, when huge, rowdy parties in rooms and common areas were commonplace. He’s been on more than a dozen since, and things have “calmed down quite a bit,” he said.

One recent weeknight at around 9:30, Auxier and Petty Officer 1st Class Charles Dowding walked into a park near several barracks buildings, where small groups of sailors sat quietly in the dark, smoking cigarettes and sipping beer.

“You’ve got 30 more minutes,” Auxier told the sailors, many of whom had several empty bottles lined up on the cement picnic tables.

Auxier and Dowding didn’t hassle them, though they would go back later to make sure everyone had cleared out. From the park, they walked to a fence separating the base from the civilian world, and glanced into dark spots near a parking lot, to make sure no one was hiding or hurt.

Outside the fence, neon signs flashed “cocktails and dancing” and “adult emporium.”

Next, Auxier and Dowding walked to the bowling alley. Just one man was bowling, but the bar area was nearly full — another potential trouble spot. One man held up his beer to greet Auxier; most patrons seemed unbothered by the patrols.

The point of the patrols isn’t to stamp out fun or stop all drinking, said base Command Master Chief Scott Mathis. Instead, the senior enlisted leaders simply make sure that people are acting appropriately and following the rules. They also can offer help, advice or just a listening ear.

If they see someone standing by himself in the dark, they ask if they are all right. If they see a loud, drunken room party that consists of one woman and nine men, they make sure the woman is OK and send everyone home. If someone looks underage, they ask for an ID. And if their peaceful attempts to defuse a situation turn violent, or if they see criminal activity, they call security.

While the program was designed with an eye at preventing sexual assaults, Mathis said that since the patrols began, the base has seen a marked decrease in other crimes and misbehavior as well, such as DUIs.

That appears to be a trend Navy wide: There were 52 percent fewer alcohol-related incidents in May, June, July and August of 2013 than in the same time period of 2012, despite the fact that some of the alcohol-related policies and programs didn’t begin until mid-summer.

When the sailors see the chiefs walking up, in uniform, “It’s like, ‘Uh oh, time to act right,’” Auxier said.

Auxier and Dowding also live in the barracks as resident advisers. Sailors can come to them 24 hours a day, and they sometimes do. Auxier said he’s had sailors knock on his door to report sexual assaults, or ask for other help.

Auxier said it seems like the number of sexual assaults has gone up, but he believes what has really gone up is the reporting. Sexual assaults are notoriously underreported both in the civilian and military sector, and the reporting rate is one of the many areas military leaders hope to address with new programs.

Capt. Mike Dowling, the officer in charge of sexual assault prevention and response programs for the Navy’s southwest region, said some of the training sailors and Navy civilians get is focused on bystander intervention, or “having the courage to step up when things aren’t quite right — even in the work center.”

That could be talking to a supervisor if a remark or behavior makes someone uncomfortable, or making sure that someone who has had too much to drink doesn’t drive home, Dowling said.

The training also focuses a lot on the question of consent, and addresses the common belief that many victims who report being sexually assaulted are just regretting consensual behavior after the fact.

The trainers explain that when anyone of either party is extremely intoxicated, they can’t consent, and that “if you think you need to go out and target people who are drunk to have sex,” that is predatory behavior, Dowling said. And they stress that just because someone is a bad situation doesn’t mean that they deserve to be attacked.

“I’ll tell folks, if I go out and get really drunk, I deserve to fall down, I deserve to get a hangover … I may die because I consume so much alcohol. [But] I don’t deserve to be sexually assaulted because I was drunk,” he said.

The Navy has instituted other rules, as well. At Naval Base San Diego, sailors bringing guests on base after 9 p.m. have to use their own ID card to sign them in — and they are held responsible if the guests misbehave. Chief of Naval Operations Adm. Jonathan Greenert in July announced new restrictions on alcohol sales, including that at on-base bars like the one at the bowling alley, sailors can no longer buy pitchers of beer or rounds of drinks with only one ID card. That helps ensure that no one is buying drinks for underage friends, and means that bartenders can evaluate whether someone has had enough to drink before serving them another alcoholic beverage.

Navy leaders in the San Diego area also have reached out to local law enforcement, colleges, and the gay and lesbian community, to share challenges and best practices for preventing and responding to sexual assaults. Bartenders and clerks on base have been through training to recognize when someone has had enough to drink, and civilians throughout the Navy are being trained with a program designed to let them know how to help prevent and report sexual assaults.

The new programs are a departure from the past, when the Navy and other services had focused mainly on caring for victims after assaults occurred, with little work toward stopping the assaults.

In 2009, the Navy combed through surveys and reports dating back to 2004, and found that sailors with the highest risk of becoming victims of sexual assault were the youngest sailors, particularly those fresh out of boot camp. So officials zeroed in on the Navy’s largest training camp.

The Navy didn’t have a template to affect change; they started with a two-day summit at Great Lakes, putting together civilian and military experts, admirals and other stakeholders to review data, compare insights and talk about what might work.

Then, instead of trying one idea, they tried several, said Jill Loftus, director of the Department of the Navy’s Sexual Assault Prevention and Response Office.

“We really believe that, to have a successful program to prevent sexual assault, you need to have leadership engagement, you need to have a multi-pronged training approach, you need not only top-down but bottom-up buy-in, and you need an environment which allows people not to be bystanders,” Loftus said.

And Navy officials believe the decrease at Naval Station Great Lakes wasn’t just a reduction in reporting, Loftus said. Commanders gave student anonymous surveys as they left Naval Station Great Lakes, asking if they had experienced any kind of inappropriate sexual contact, and if so, what kind. Those surveys also showed a significant reduction in serious assaults, officials said.

The Navy, like all branches of the military, has long had an office charged with preventing and responding to sexual assault. But, Loftus said, “We’d like to have less business on the supporting victims and more on the prevention.”

“That’s not to say we’ve taken our focus away from victims … but we need to work on the prevention,” she said.

Not all the efforts were focused at Great Lakes. The Navy also tried bystander intervention training in Pensacola, Fla., and surveyed the sailors as they were leaving the post. Nearly a dozen people said they had intervened in a situation during their time there and believed they had prevented a sexual assault, Loftus said.

Leaders also noticed something else: During that six-month period, there had been no nonjudicial punishments, whereas a typical six months might have yielded 17 such actions. No alcohol-related incidents, no sexual assaults, no domestic violence charges. Nothing, Loftus said.

Despite the successes, Loftus said reporting is still not as high as it should be.

But the emphasis on solving the problem and a perception that commanders are taking reports seriously could change that, Mathis and Auxier said.

“I think people are feeling more safe coming forward,” Mathis said, noting that when sailors see their leaders try to hold attackers accountable, and understand that sexual assault is not just a crime of men attacking women, they are more likely to report.

Last month, Rear Adm. Sean Buck, the Navy’s top sexual assault prevention and response officer, told journalists that reports of sexual assault in the Navy have increased dramatically this year, and the number of reports made in fiscal 2013 is likely to be about 45 percent higher than the 726 reported in fiscal 2012.

Dowling said the Navy’s southwest region has seen an increase in reporting, but not all of the crimes reported happened recently. He said he hopes that means that people are more willing to report now.

“It’s not something that’s going to happen overnight or in a year, but we think we are making some progress.”