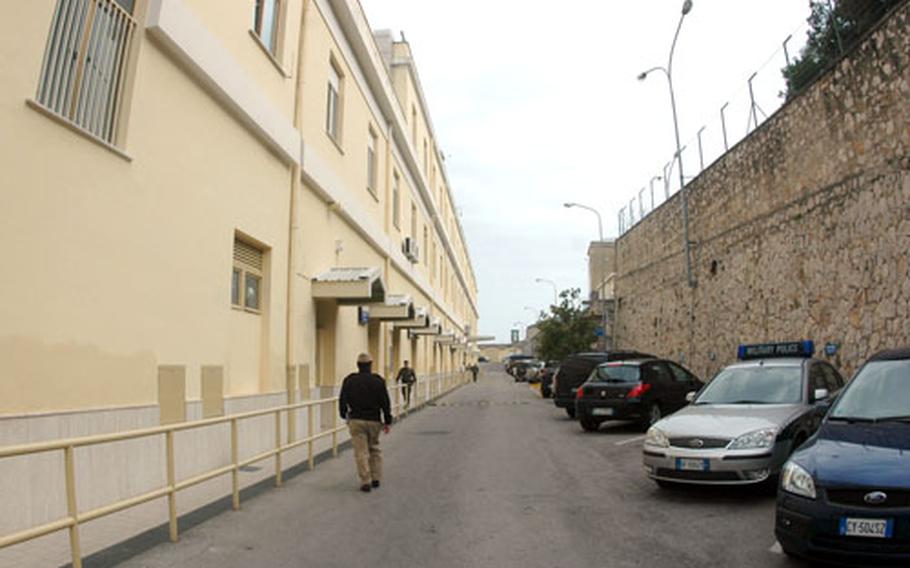 Many U.S. Navy services, such as the Navy Exchange, post office, MWR, and elementary school, are housed in this building on the hilltop Monte Orlando base in Gaeta. The U.S. Navy is slated to leave the location by July, transferring services to trailers and a building being refurbished along the pier in Gaeta. (Sandra Jontz / S&S)

Many U.S. Navy services, such as the Navy Exchange, post office, MWR, and elementary school, are housed in this building on the hilltop Monte Orlando base in Gaeta. The U.S. Navy is slated to leave the location by July, transferring services to trailers and a building being refurbished along the pier in Gaeta. (Sandra Jontz / S&S) 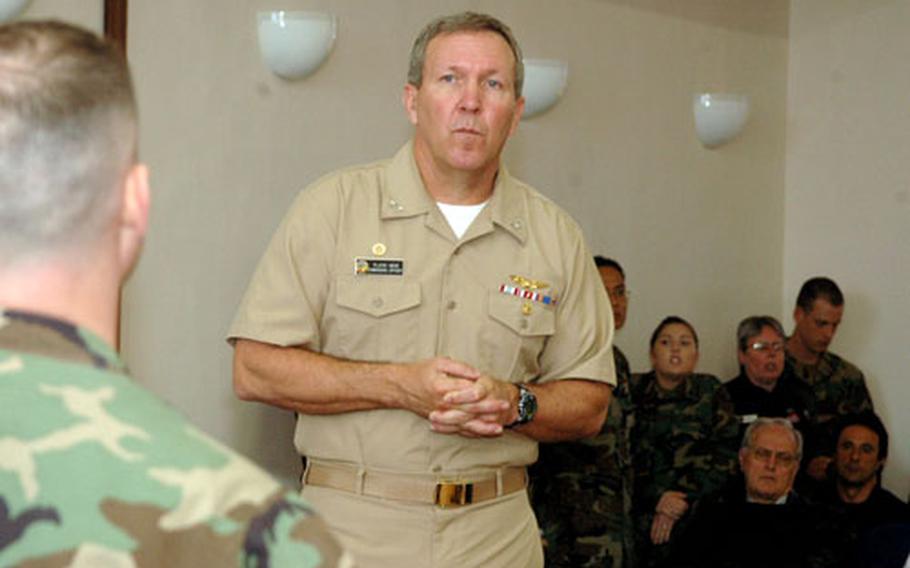 GAETA, Italy &#8212; Navy officials unveiled details Monday of their continued efforts to downsize its presence in Gaeta, and by mid-July, officials hope to relocate from the picturesque, hilltop base of Monte Orlando to buildings and trailers set up along the pier.

With the USS Mount Whitney &#8212; the 6th Fleet flagship &#8212; still homeported in Gaeta, the Navy facility won&#8217;t be shut down completely, but services will be cut back drastically, officials said.

By July 11, the Navy is relocating services from the Monte Orlando facility to &#8220;fleet landing&#8221; on the pier, Capt. Floyd Hehe, commander of Naval Support Activity Naples, told sailors, civilians and families at a town hall meeting Monday.

Through attrition, the base&#8217;s military population will shrink from 106 to about 48 sailors, mostly security personnel. That count doesn&#8217;t include the roughly 300 sailors and civilian mariners of the Military Sealift Command assigned to the Mount Whitney.

By September, the Navy is expected to turn over Monte Orlando to the Italian government.

While future assignments to Gaeta will still be accompanied tours, sailors and families will be warned of the drastically limited services, said Lt. Paul Macapagal, the base spokesman.

As part of the shifting and decreasing of services, the Navy arranged for a Navy doctor and staff to provide medical services at the Casa del Sole hospital in Formia. Other services &#8212; such as registering a car, counseling, or shipments of household goods &#8212; will be limited to once-a-week, with personnel traveling from Naples to Gaeta on various scheduled days.

To Chief Petty Officer Kevin Murphy&#8217;s disappointment, the base can&#8217;t increase the maximum liters for gas coupons members buy each month &#8212; even though some might be required to drive for work the roughly 65 miles between Gaeta and the base housing in Naples, Hehe said. Under a Status of Forces Agreement with Italy, U.S. and NATO personnel receive a tax break on fuel by buying fuel coupons from the military for use at stations off base. Maximum limits depend on engine size, with 400-liters the most anyone can buy each month.

To help defray the cost, Hehe said he hopes to provide a shuttle bus service between Gaeta and Naples.

The elementary school is slated to close at the end of this school year.

Officials also are trying to get a Navy Exchange mini-mart at the Old Mill Inn recreational facility, Hehe said. If that plan fails, services such as check cashing, euro exchange and gas coupon sales will be offered at Gaeta once a week.

The three main employers of Italian and American civilian personnel, the Navy; Morale, Welfare and Recreation; and the Navy Exchange, have yet to decide which jobs will be cut, Hehe said.

Jobs eventually will be cut, assured Al Spinelli, director of the Human Resources Office. But officials will &#8220;offer priority placement&#8221; for openings at the bases in Naples for those laid off.