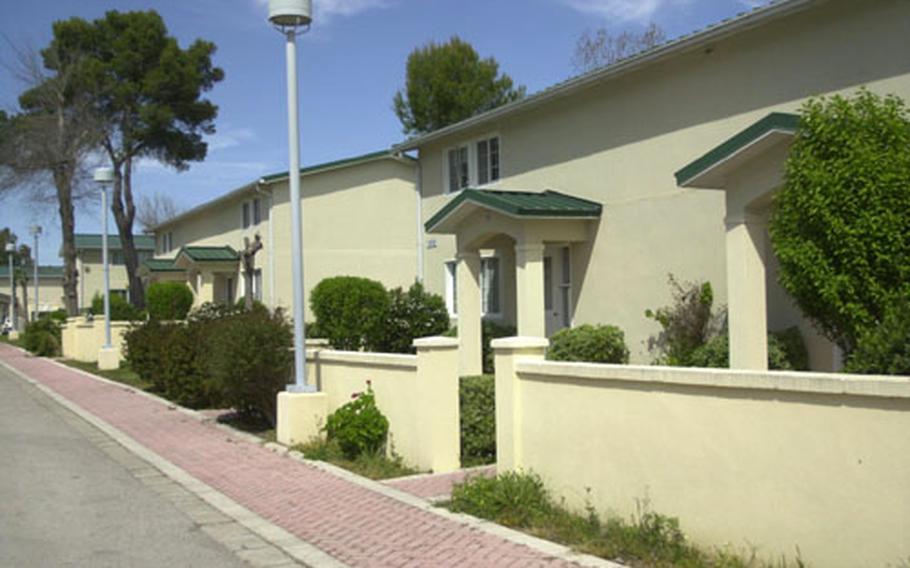 A block of housing in the Las Flores section of Naval Station Rota&#39;s base housing in Spain. A surplus in base housing means military personnel below the pay rate of E-5 must live on base. (Scott Schonauer / S&S)

A block of housing in the Las Flores section of Naval Station Rota&#39;s base housing in Spain. A surplus in base housing means military personnel below the pay rate of E-5 must live on base. (Scott Schonauer / S&S) Children play in the backyard of a home at Naval Station Rota, Spain. A surplus in base housing means military personnel below the pay rate of E-5 must live on base in Rota. (Scott Schonauer / S&S)

NAVAL STATION ROTA, Spain &#8212; A glut in on-base housing units at Rota has forced the Navy to require junior enlisted personnel and their families to live on base to fill vacant homes.

The Housing Welcome Center, which helps military and civilian personnel find homes on and off base, is trying to find families for 70 vacant homes.

The military spends about $12,400 to maintain and service each unit, but a servicemember with an E-2 pay rate receives around $16,000 annual housing allowance to live off-base in Rota.

Before arriving at a duty station, military members typically can choose to live on base or receive a housing allowance based on their rank.

Servicemembers in Rota between the pay rates of E-1 and E-5 are required to live in base housing. However, there are some exceptions, Joyce said.

For example, military members now living in town do not have to move on base. And if a family cannot fit into one of the units or if servicemembers plan to purchase a house in the local area, they do not have to live in housing. The new housing policy will remain until all of the homes are occupied.

It is unusual for a military base to have vacant homes. Families often have to go on a waiting list before they can move into housing at bases in the United States. That&#8217;s not the case in Rota.

The base is in the midst of an $8 million project to repair and improve the housing area, but the naval station is struggling to entice enlisted sailors to live in the townhouse-style units.

The reason servicemembers are choosing to live off-base boils down to personal choice.

Many sailors such as Petty Officer 2nd Class Anthony Velazquez live in Rota because they want to be closer to the Spanish culture. His family moved into a home in town before the policy was implemented.

Using his housing allowance to lease a place in Rota allowed him to get a bigger home than on base. Living outside the base perimeter also gives him a sense of freedom from the daily grind.

Some sailors like the convenience and safety of living on base.

Petty Officer 2nd Class Chris Janssen and his wife, Brenna, wanted to live in base housing so they could be close to the hospital. They have a 16-month-old daughter.

The Pentagon&#8217;s transformation of military commands in Europe could help fill some of them. There is speculation that the Navy base will gain several more commands, bringing more servicemembers and families.

The housing center hopes to find families for all the units by the summer&#8217;s end, Joyce said.

&#8220;Hopefully, by then there is a better understanding where the troops in Europe are going to be moving to,&#8221; he said.