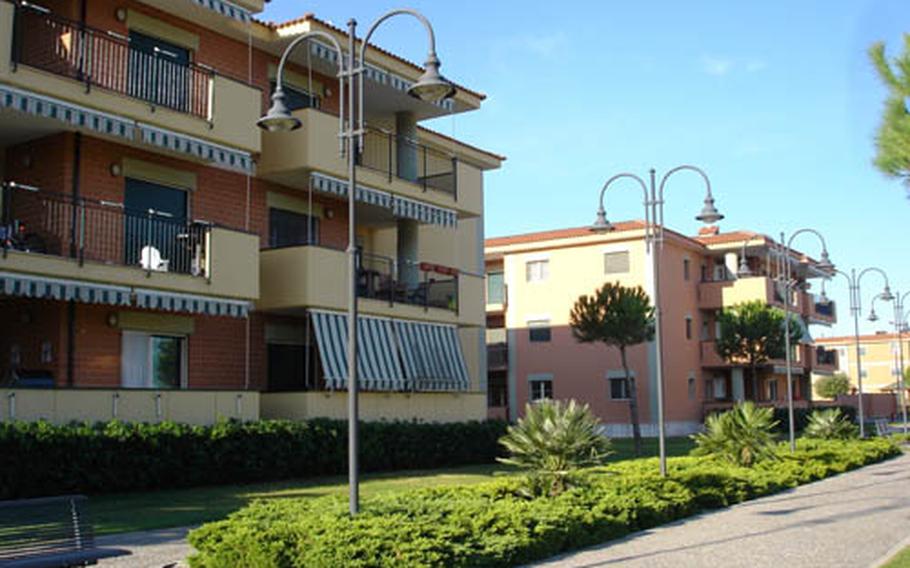 The Navy paid some $3.7 million in fiscal 2008 for apartments that sat vacant. Part of the problem might be that sailors moving to the area have the choice of living on or off base. The Navy will now allow single civilians to occupy apartments on Gricignano. (Sandra Jontz / S&S)

NAPLES, Italy &#8212; The Navy will allow single civilians to live on the Gricignano support site in a move designed in part to combat consistently high vacancy rates at on-base apartments.

The decision was made Nov. 7 by Commander, Naval Installations Command after some single personnel requested to live on base, said Lt. Paul Macapagal, Naval Support Activity Naples spokesman.

That was welcome news for Maria Quitugua, a recent arrival to the base, who works for Naval Facilities Engineering Command Europe and Southwest Asia. In early September, before arriving in Naples, Quitugua wrote the housing office asking to live on base.

She said they told her single civilians were ineligible.

"I wanted to live on base because this is my first time being unaccompanied overseas," Quitugua said. "My husband passed away in 2005, and I felt safer living on base. This came at a really good time."

In 2006, base officials requested a "temporary diversion" waiver of 48 two-bedroom family housing units for single sailors. Since the two-bedroom units fall under family housing, single personnel &#8212; even military &#8212; were not allowed to move in. The request was granted, and those units were all occupied by single military personnel.

But even with the additional two-bedroom units filled, there was still a high vacancy rate in base housing.

In 2008 the Navy spent approximately $3.7 million in rent on "approximately 237 vacant units at any given time," according to Navy officials.

At the same time, personnel who could otherwise occupy the base units receive housing allowances to rent off-base homes. The rents paid to off-base landlords are well above rent the Navy pays for the base units.

The Navy leases the support site, and the apartments, from local company Mirabella.

During recent town hall meetings, some single civilians expressed frustration that the Navy used their tax dollars for empty base housing but barred them from living in those homes.

The housing office has since diverted an additional 48 units to house single civilians. So far, only five, including Quitugua who is scheduled to move this week, have accepted.

Housing officials are "in the process of notifying incoming personnel and others that may have shown interest in occupying those units," Macapagal said.