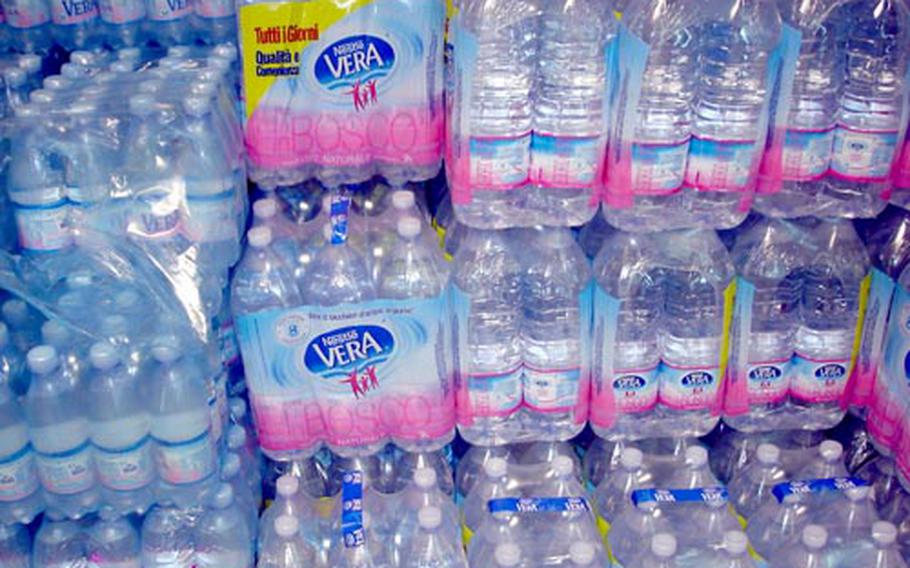 Residents living off base in Naples, Italy, will soon get free drinking water courtesy of the U.S. Navy. The water is being made available after contaminates were found in the water of some off-base housing during the Navy&#39;s assessment on health risks associated with living in Naples. (Lisa Novak/ S&S)

NAPLES, Italy &#8212; Residents living off base in Naples will be provided free drinking water by the Navy after tests found some of them may have been exposed to contaminated water in their homes.

Secretary of the Navy Donald Winter on Tuesday approved Navy Region Europe&#8217;s request to provide bottled water, according to a command e-mail sent to hundreds of recipients Wednesday morning.

The Navy will provide four liters a person per day as part of an "interim solution designed to provide potable water for drinking, cooking, brushing teeth and making ice," officials said.

While details of the request to purchase the water were not available, Navy officials said Wednesday that $144,000 was approved for the initial purchase. The Navy did not announce specific details for distribution of the water.

The news was welcome but worrisome for some of the residents.

"This will help financially, but if the Navy is willing to pay a lot of money for water, that concerns me. Maybe they really don&#8217;t know what&#8217;s in the water in our homes," said Traci Scudi, whose husband is stationed in Naples.

"We&#8217;ve always used bottled water for drinking, but now we&#8217;ll use it for cooking and brushing our teeth as well."

The Scudis have lived in Naples for three years, but some newcomers are concerned, too.

"I just got here in August and I&#8217;m moving to Casal di Principe," said Petty Officer 1st Class Anthony Derricott. "I&#8217;m glad the Navy is doing something to combat the water issue, but I&#8217;m very concerned."

Casal di Principe is one of the areas with homes whose tap water was found to exceed permissible bacteria levels. Three homes in that area also tested positive for volatile organic compounds in the tap water that "cannot be adequately mitigated through the use of bottled water," according to U.S. Navy officials.

Officials advise all off-base residents to use bottled water because they may be exposed to contaminated water in their homes. The Navy is conducting a health assessment on air, soil and water quality due to concerns over the decades-long trash crisis, which resulted in the illegal burning and dumping of garbage, and burial of toxic materials in Naples.

"The Navy should issue water testing kits for everyone. It will cost more for the Navy to send someone to the hospital [if they get sick] than to buy a test kit," said Chunn, who has two small children. "Water still absorbs through the skin."