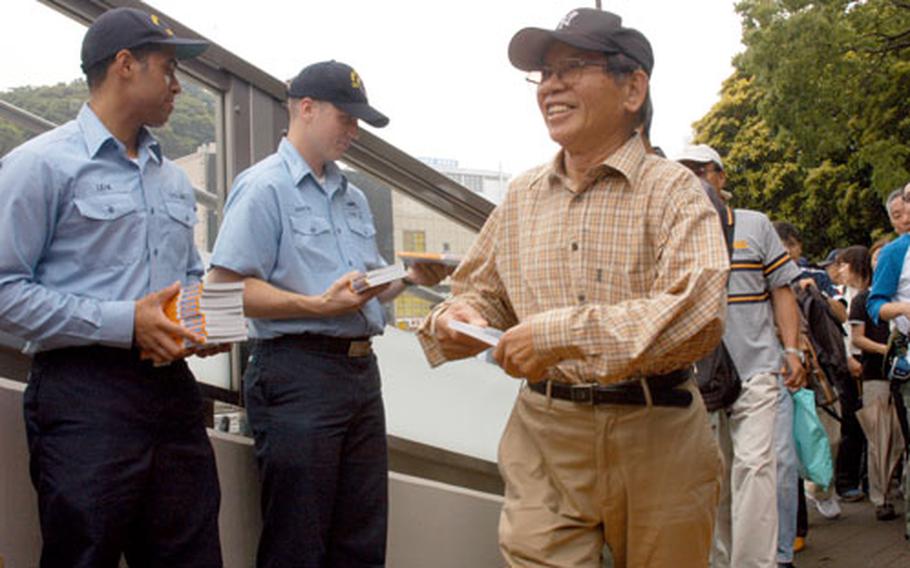 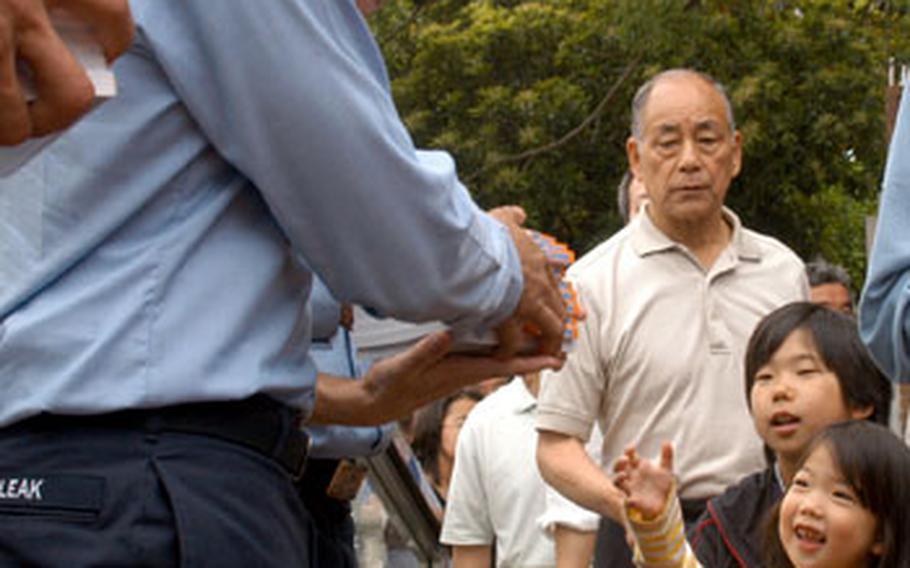 A young girl gets her copy of "CVN 73." The publication focuses on the carrier&#39;s safety and is meant to inform the Japanese public about the ship, which will be the first nuclear-propulsion carrier deployed to Japan. (Allison Batdorff / S&S) 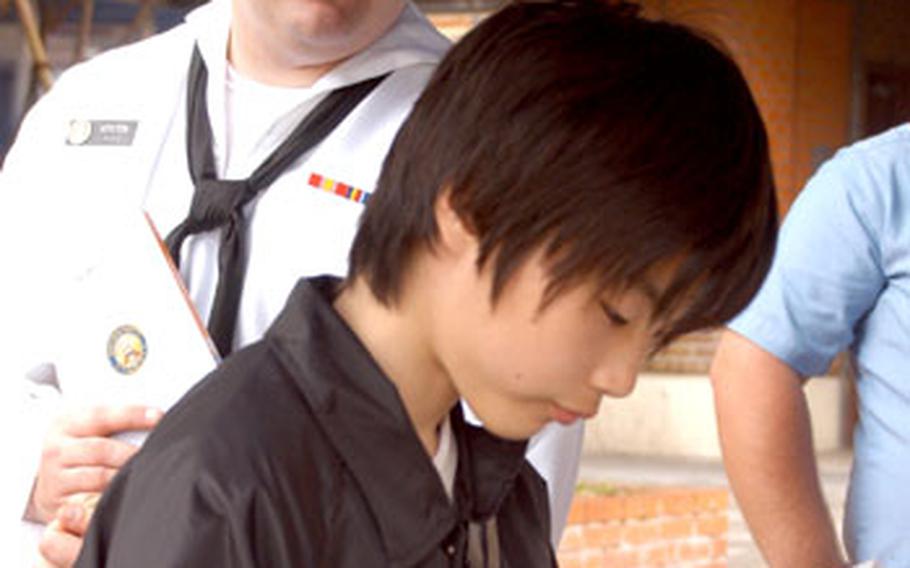 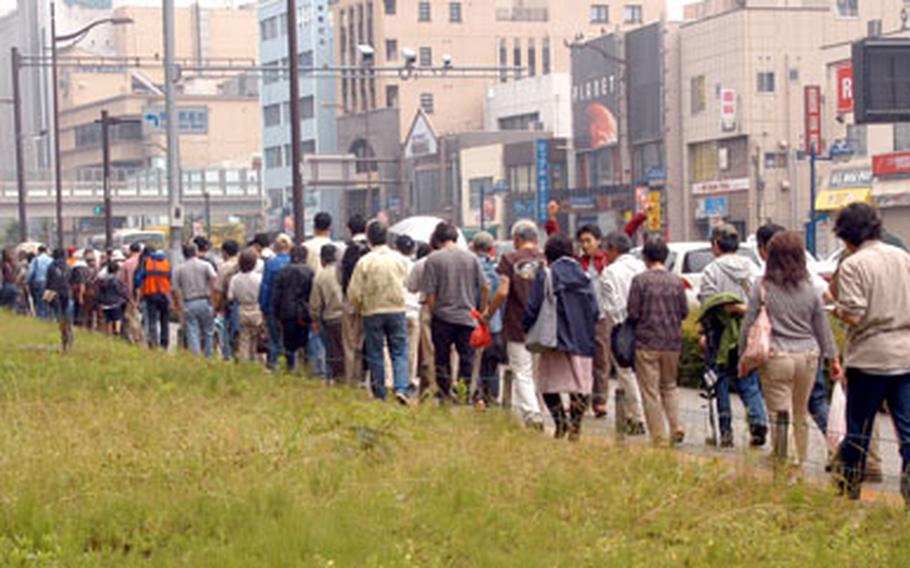 The line for the manga about the USS George Washington stretched down the road in front of Yokosuka Naval Base on Sunday. Officials estimated they distributed about 800 copies of the Japanese comic. (Allison Batdorff / S&S)

YOKOSUKA NAVAL BASE, Japan &#8212; The lengthy line of manga fans snaking down the Highway 16 sidewalk Sunday meant one thing to Navy Cmdr. David Waterman &#8212; they had "broken the code" in communicating with the Japanese public.

The first hour was manga madness for "CVN 73," the Navy&#8217;s 200-page comic starring the USS George Washington. The aircraft carrier is scheduled to arrive in Yokosuka this August and will be the first nuclear-propelled ship forward-deployed to Japan.

Sailors handed out about 800 copies of "CVN 73" in three hours in the manga&#8217;s first day of distribution. More will be handed out at upcoming open base events, said Waterman, a spokesman for Commander U.S. Naval Forces Japan.

"The response has been phenomenal," Waterman said. "People told me that if we passed out a brochure or a tri-fold, they wouldn&#8217;t read it. But with a manga, we&#8217;re speaking their language."

"CVN 73" puts a positive spin on ship life, safety and U.S. Japanese relations through the eyes and experience of fictitious Japanese-American sailor Jack Ohara. About 30,000 copies have been printed, the vast majority in Japanese. The title comes from the ship&#8217;s hull number.

The format appears to be perfect for tackling "points of contention," Waterman said, as the ship&#8217;s nuclear plant is the flashpoint for local citizens groups worried about ship safety and environmental impact. Thousands of signatures have been collected calling for a public vote on the issue, but Yokosuka city government defeated the measure twice in two years.

Questions about the George Washington had Hiroharu Kitamura leaving his Yokohama residence early so he could get a copy of "CVN 73." The 64-year-old was one of the first people in line hours before the event started.

"I have concerns about the nuclear carrier," Kitamura said. "Manga is one effective way (of getting the information out). It looks good and easy to understand."

Marie Matsuka, 29, said the manga medium triggered her interest in the issue.

"I decided to learn about [the USS George Washington] because of this," said the Yokosuka resident.

While one blogger christened the Navy comic "propamanga," Matsuka and other manga-goers said that whether or not they agree with the carrier deployment, reading the manga gives them a better idea of the Navy&#8217;s mind-set.

"It&#8217;s good since I can learn about the U.S. military&#8217;s perspective," said Yokosuka resident Shintaro Yoshida. The 29-year-old also wanted to show his father the manga because his dad likes military ships, he said.

Creating a manga for the military does present challenges, said "CVN 73" authors/illustrators Harumi Sato and Hiroshi Kazusa, who autographed copies Sunday. The pair also did a manga for the Japan Self-Defense Force, they said.

"It&#8217;s difficult to obtain information," Kazusa said. "With the George Washington, we were limited as to the details and a lot of things we could not get."

The manga&#8217;s fire-fighting scene is coincidental, Kazusa said, as a very real blaze on May 22 currently has the George Washington in San Diego, Calif., undergoing assessment and repairs. Though the fire&#8217;s cause is yet undisclosed, a Navy report issued Friday said the fire was "primarily electrical in nature" and that it damaged about 80 spaces on the ship. The fire has already delayed the aircraft carrier&#8217;s swap with the USS Kitty Hawk, the 47-year-old ship the George Washington is slated to replace, and could have other impacts on both of the ships&#8217; schedules this summer.

Kazusa said he was surprised at Sunday&#8217;s turnout by both the size and demographics.

The Navy&#8217;s target age for the manga was 10 to 30 years old, but senior citizens made up a sizeable part of the crowd.

But 68-year-old Yutaka Yamada said he wanted "CVN 73" for himself as a collectible, but he&#8217;ll let his children borrow it, he said.

"This will be a treasure after a few years," Yamada said.

Free downloads of "CVN 73" in English and Japanese were to be available at www.cnfj.navy.mil and www.kanji.cnfj.navy.mil starting Monday.