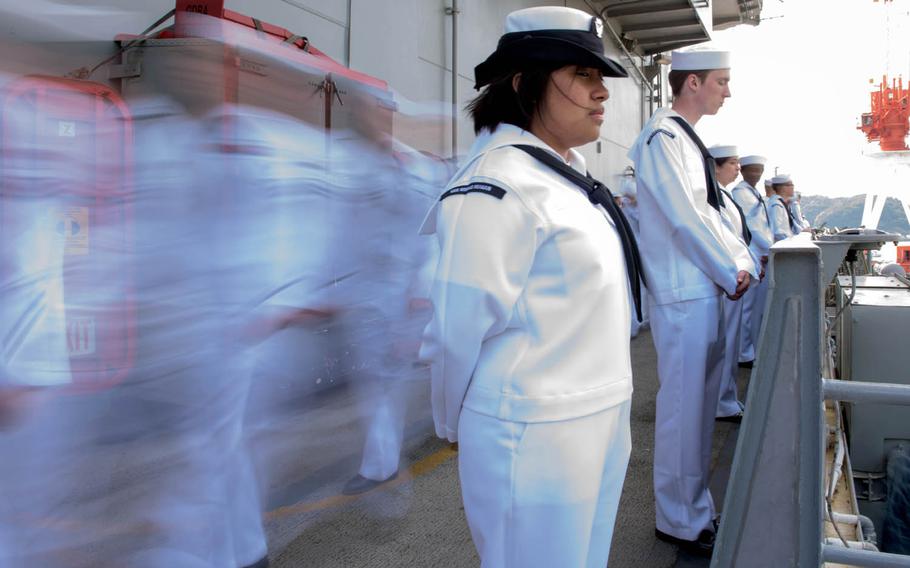 Sailors man the rails aboard the aircraft carrier USS Ronald Reagan as the ship begins its 2017 patrol in May from Yokosuka, Japan. (Kenneth Abbate/U.S. Navy)

Sailors man the rails aboard the aircraft carrier USS Ronald Reagan as the ship begins its 2017 patrol in May from Yokosuka, Japan. (Kenneth Abbate/U.S. Navy) 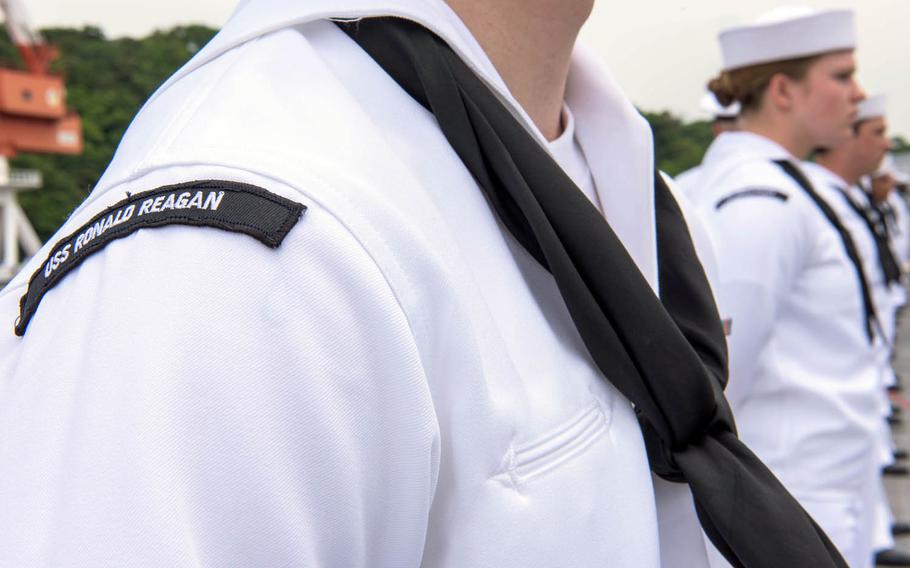 Sailors stand at parade rest on the flight deck of the Navy's only forward-deployed aircraft carrier, the USS Ronald Reagan, in May at Yokosuka, Japan. (Kenneth Abbate/U.S. Navy)

YOKOSUKA NAVAL BASE, Japan — Sailors could see their chances of deploying to the 7th Fleet increase after Navy officials gathered recently to address personnel gaps in the region.

Officials from 7th Fleet, Naval Forces Japan, Pacific Fleet and Navy Personnel Command met at Yokosuka last week for a three-day summit to discuss the impact manning policies are having on 7th Fleet’s ability to complete its missions, along with possible solutions.

“We wanted to know how manning was effecting their ability to meet their mission tomorrow,” Rear Adm. Richard Brown, head of Navy Personnel Command and deputy chief of Naval Personnel, told Stars and Stripes after the summit wrapped up on Friday. “As in any year there are pressure and stresses on the manpower account. In a perfect world, we would have all the bodies we need to man the fleet. In reality, that is not the case.”

Brown, who also spoke to USS Benfold and USS Antietam sailors about manning issues, wouldn’t discuss specifics regarding personnel shortages but acknowledged strain on the fleet. He said a forward-deployed force like 7th Fleet should have priority when it comes to stationing sailors.

“The [forward-deployed naval forces] are at the tip of the spear, and they have to be ready to fight tonight,” he said. “We have to make sure they are manned correctly so they can do that.”

The Navy has been making efforts to add new sailors while retaining those already enlisted. The service’s fiscal year 2018 budget aims to increase its rolls to 327,900 — about 4,000 more than FY 2017’s final tally. The Navy also announced changes last month to its tenure policy, allowing some sailors to stay in the service longer without being promoted.

“Seventh Fleet needs priority on manning,” Brown said. “They are always on deployment … we want to make sure that we have the priorities set correctly.”

Brown also attributed manning issues to the fact that stateside-based sailors’ tour lengths are often decided by their occupational specialty, with tours ranging from two to five years. Current Japan-specific policies generally cap tours at two or three years leading to sailors rotating out faster and more often than those in stateside units.

Mitchell added that larger unit leaders, such as task force commanders, have the option of shuffling sailors with vital skills between ships to fill gaps. But Mitchell said this isn’t an optimal solution, because it causes some sailors to spend more time at sea than average. It’s also harder for units like 7th Fleet to do this, because they have a high operational tempo.

“[Task Force 70] owns all the ships in the Reagan strike group and they had to take 47 people and move them around in the month of May to get the ships mission capable out on the sea,” he said. “That’s a pretty big number for the relatively small number of ships we have here. It means a lot more underway time for some sailors.”

Brown said he doesn’t anticipate any major policy changes regarding manning, but does expect “tweaking” to polices and that forward-deployed forces may receive a slightly higher manning priority in the future.

“Navy is committed to make sure manning is right in the [forward-deployed naval forces] forces,” he said. “We cannot have manning polices that don’t support them and their ability to carry out the mission. They have to be ready to fight 24 hours a day. To be able to do that they have to be manned properly at all times and we’re gonna do that.”