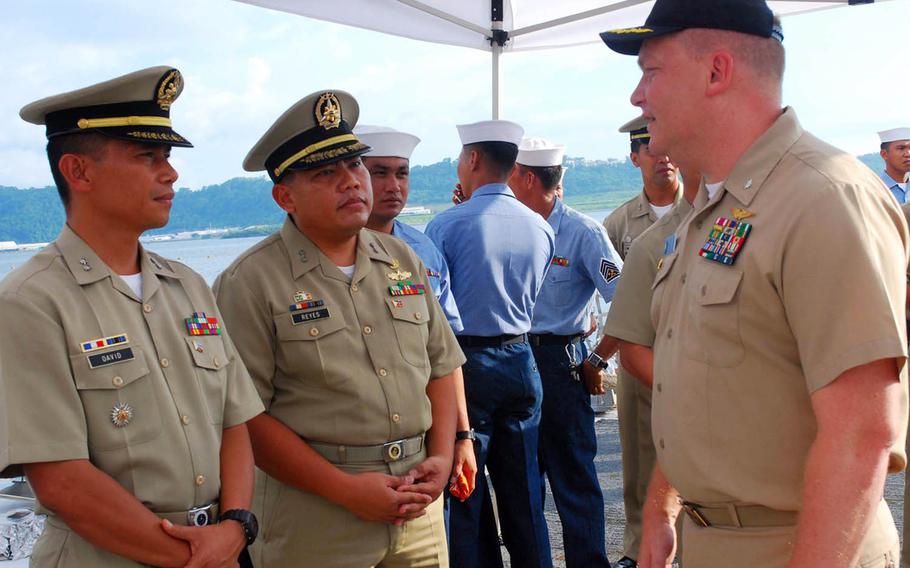 Another Navy officer has fallen under the specter of the ever-growing “Fat Leonard” fraud and corruption scandal.

Former Cmdr. Troy Amundson, 50, of Ramsey, Minn., pleaded guilty Tuesday in District Court in San Diego to one federal charge of conspiracy to commit bribery for trading “confidential, proprietary U.S. Navy information” for entertainment expenses and prostitutes, according to a statement from the U.S. Attorney for the Southern District of California.

Amundson is the 20th of 29 defendants to plead guilty in the scandal and faces up to five years in prison and a $250,000 fine.

The charges stem from a decade-long conspiracy where foreign defense contractor Leonard Glenn “Fat Leonard” Francis of the Singapore-based Glenn Defense Marine Asia traded bribes and gifts — from cash to Spanish suckling pigs and luxury travel — to a slew of top Navy officers across the Pacific in exchange for information on ship movements and contracts, resulting in tens of millions of dollars in fraudulent over-billing.

Francis pleaded guilty in 2015 to bribery and fraud charges.

“Amundson deliberately, methodically, and repeatedly traded his public office for entertainment expenses and the services of prostitutes, and in so doing, aligned himself with a foreign defense contractor over his Navy, his colleagues and his country,” U.S. Attorney Adam Braverman said in the statement. “We are pressing forward in this investigation until we are certain that all involved have been held accountable.”

Amundson was in a unique position to aid Francis and GDMA as the officer in charge of the Navy’s joint military exercises in the region from May 2005 to May 2013, the statement said. He was responsible for maintaining relationships with foreign navies.

As part of his plea, Amundson admitted that from September 2012 through October 2013 Francis paid for meals, drinks, transportation, other entertainment expenses and prostitutes for Amundson and other Navy officers.

At one point, Amundson wrote to Francis from a private email account: “Handoff? … [M]y [friend], your program is awesome. I am a small dog just trying to get a bone … however I am very happy with my small program. I still need five minutes to pass some data when we can meet up. Cannot print.”

Amundson admitted that later that night, Francis provided the services of several prostitutes from Mongolia.

Amundson was interviewed by investigators in October 2013, the statement said. He later admitted to deleting all of his private email account correspondence with Francis after his interview with law enforcement officials.

Prosecutors accused Amundson of “taking official acts for the benefit of GDMA and violating his official duties to the [Navy],” the statement said.

Sentencing is scheduled for April 27 in San Diego.