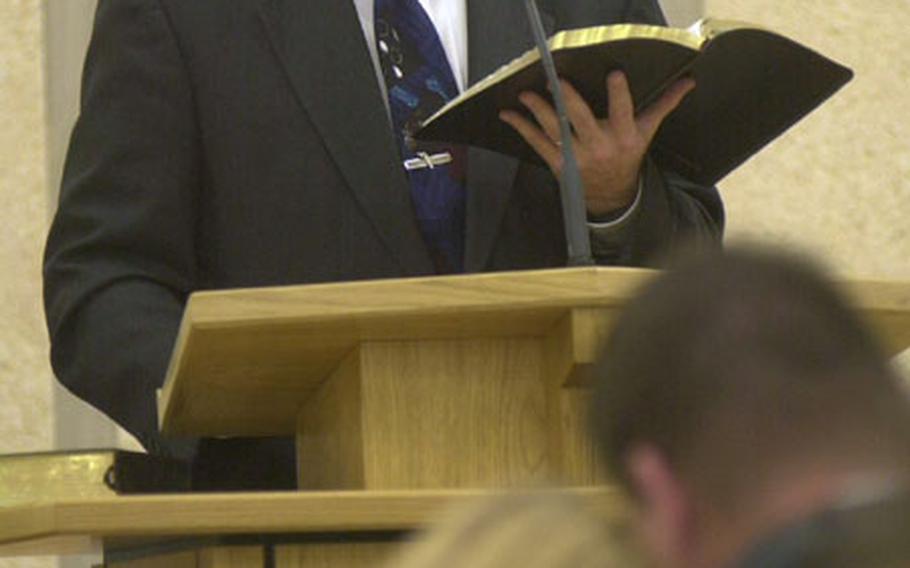 EL PUERTO DE SANTA MARIA, Spain &#8212; It smells like rain outside, and the dark, ominous clouds make it seem later than it actually is. The fact that it is Sunday only makes the weather more miserable.

Yet, inside The Church of Jesus Christ of Latter-day Saints, Navy Lt. Scott McKenzie is praising the blistering morning as a &#8220;beautiful day.&#8221;

Parishioners probably expect nothing less from the mouth of someone they describe as the eternal optimist.

Perhaps, McKenzie&#8217;s duties call for him to look on the bright side even on the dreariest days. Or, it could be he just doesn&#8217;t have enough free time to dwell on the negative.

His weekly schedule would rival the busiest workaholic.

McKenzie, 42, manages two jobs: one as a Navy environmental health officer, and a second as leader of the local Mormon church.

In his position at Naval Station Rota, he preaches to commands about such issues as occupational safety, good personal hygiene and the benefits of maintaining a healthy lifestyle.

But when he is not in uniform, he puts on a tie and jacket and leads a congregation of about 100 people. Every Sunday, he officiates services at their new church, which they share with a Spanish-speaking congregation.

In addition, he is involved with the Cub Scouts, has spent 30 years with Boy Scouts of America and volunteers at the base elementary school.

While responsibility is divided among parishioners in the Mormon church, parishioners said McKenzie puts in more time than anyone else. He volunteers as much as 30 hours a week working for the church in addition to his Navy duties.

When asked how he manages the responsibilities at the hospital and the church, he said, &#8220;The Lord provides.&#8221;

He also credited his family, his wife, Jackie, and their son, Jeremiah, 10, for their support.

Juggling the demands of both jobs is challenging, but church members say they can always lean on McKenzie for personal advice or spiritual guidance any day, any time.

For instance, he helped Kinghorn, a member of the church and a music teacher at the Navy base, and his wife deal with the difficult process of adopting four children from the United States.

That includes people who do not have a way to get to church on Sundays. He often picks up parishioners so they can attend service.

Nearly everyone in the church has been to his house for dinner at least once, said Army Capt. Ammon Brown, the base&#8217;s veterinarian and a member of the church.

McKenzie and his family often invite single sailors or Mormon missionaries for a meal.

Last year, during the first phase of the war in Iraq, the McKenzies provided 136 meals to servicemembers deployed to Rota. Many personnel from Fleet Hospital 8, a tent hospital set up in Rota during the war, made repeat visits to the McKenzie home.

Despite the amount of time he puts into the church, he has excelled in the Navy, where he has 24 years of service. He recently was honored as the top environmental health officer in the Navy for 2003, the highest award a Navy public health officer could receive.

He also will pin on lieutenant commander in June.

His major achievements include spearheading the first preventive medicine health assessment for Er Rachidia, Morocco, during a humanitarian exercise and helping prepare for the arrival of the fleet hospital in Rota.

McKenzie said he joined the Mormon faith while growing up and participating in the Boy Scouts in Salt Lake City. He joined the church at 12.

He followed in his brother&#8217;s and father&#8217;s footsteps by joining the Navy in 1980 soon after graduating from Cottonwood High School. In 1993, he was commissioned as an ensign in the Navy&#8217;s Medical Service Corps.

He said his Christian service and his job in the Navy are similar in some ways. Mormons promote exercise and moderation, refraining from using alcohol, tea or tobacco. As the public health officer, he helps people stay healthy and safe.

He said he joined the Navy simply &#8220;to serve&#8221; and has no intention of retiring from the Navy any time soon.

So far, the figures still add up in favor of remaining in uniform.