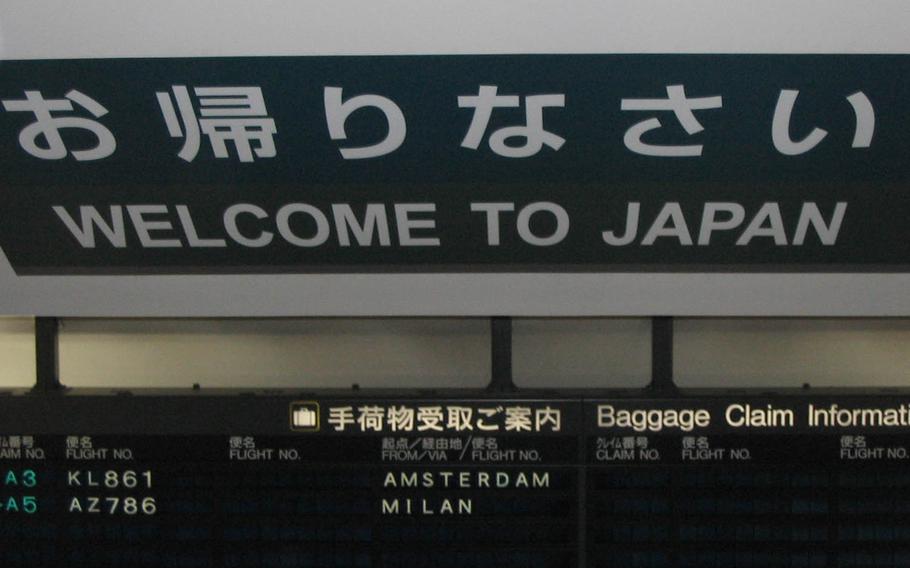 A sign at Narita International Airport welcomes new arrivals to Japan. A Navy lieutenant assigned to Naval Air Facility Atsugi is suspected of touching a 19-year-old female college student and then punching her in the head several times during a flight to Narita from San Diego. (Courtesy of Wikicommons)

TOKYO — A Navy lieutenant was arrested Friday following allegations that he groped and punched a female passenger aboard a Japan-bound flight, police and Navy officials said.

The lieutenant, 33, assigned to Naval Air Facility Atsugi, is suspected of touching the 19-year-old college student’s clothed thigh, then punching her in the head several times during a flight from San Diego to Narita International Airport, an airport police spokesman said.

Police allege the officer assaulted the woman for about 90 minutes aboard the Japan Airlines flight, beginning around 11 a.m. Thursday, according to police and media reports.

The woman changed seats after another passenger reported the incident to a flight attendant, police said.

The officer had been drinking on the flight, though how much he had consumed is unclear, the police spokesman said.

Police arrested the lieutenant and took him into custody shortly after midnight, following an investigation that began after the plane arrived Thursday afternoon.

Police said they plan to forward charges to the prosecutor’s office Saturday.

Although the officer remains in police custody for now, the military is working with Japanese authorities to determine which side has jurisdiction and will retain custody as the case moves forward, Atsugi base spokesman Sam Samuelson said.

The Navy is fully cooperating with the Japanese investigation and is conducting a “thorough and fair” investigation of its own, Samuelson said.

The base had been holding a safety stand-down Friday, emphasizing personal responsibility among its sailors.

The lieutenant’s arrest comes just three days after Seaman Apprentice Justin Castellanos, 24, was charged with raping a Japanese woman at an Okinawa hotel.

The arrests interrupted what had been a quiet year for high-profile arrests among servicemembers in Japan.

Castellanos’ arrest drew an official protest from the Japanese government. Lt. Gen. Lawrence D. Nicholson, III Marine Expeditionary Forces commander, publicly apologized for that incident on Wednesday to Okinawa Gov. Takeshi Onaga, who has vowed to stop the proposed expansion of a Marine base on the island.