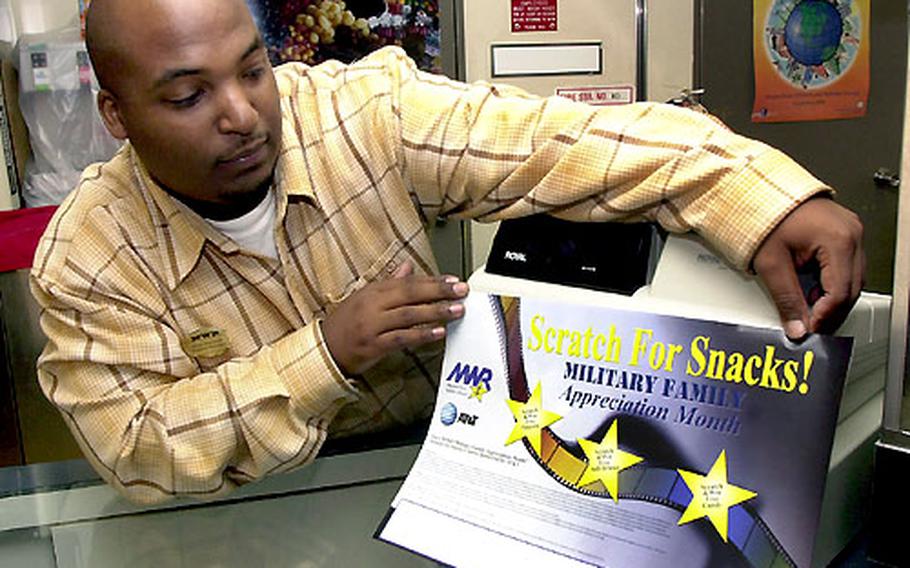 Keith Reynolds, manager of the two Navy MWR movie theaters at Sasebo Naval Base, with a poster the "Scratch and Snack" program. (Greg Tyler / S&S)

SASEBO NAVAL BASE, Japan &#8212; Movie-goers have about a one-in-three chance of winning a free soft drink, popcorn, candy bar or other snack bar item at Showboat Theater for the rest of the month.

Other sailors also might have a chance to participate in the &#8220;Scratch for Snacks&#8221; program being offered at 28 Navy Morale, Welfare and Recreation theaters worldwide. Atsugi Naval Air Facility and Yokosuka Naval Base theaters are participating.

More than 200,000 scratch-off tickets will be handed out to Navy theater-goers buying tickets.

The program kicked off Monday at Sasebo as part of Military Family Appreciation Month, according to Keith Reynolds, manager for both Showboat and Village Theater at Hario Housing Village.

Customers with losing tickets are eligible for a &#8220;second chance drawing&#8221; if they fill out required information on the back of game pieces and drop them in a theater collection bin.

Drawing prizes will be determined at the base level, Navy Motion Picture Service Branch official Jane Degonzaque said in a written statement.

Scratch for Snacks is commercially sponsored via an agreement between Morale, Welfare and Recreation and AT&T, she said.

&#8220;We are thankful for AT&T&#8217;s continued support of MWR programs and services benefiting sailors and their families,&#8221; she said.

&#8220;This promotion is all about showing appreciation for our Navy families and also encouraging them to do things together, like go to movies,&#8221; Degonzaque said in the release. &#8220;We hope the Scratch for Snacks promotion will make their movie experience even more pleasurable.&#8221;