Navy MWR introduces ‘coinless’ slots at some base casinos 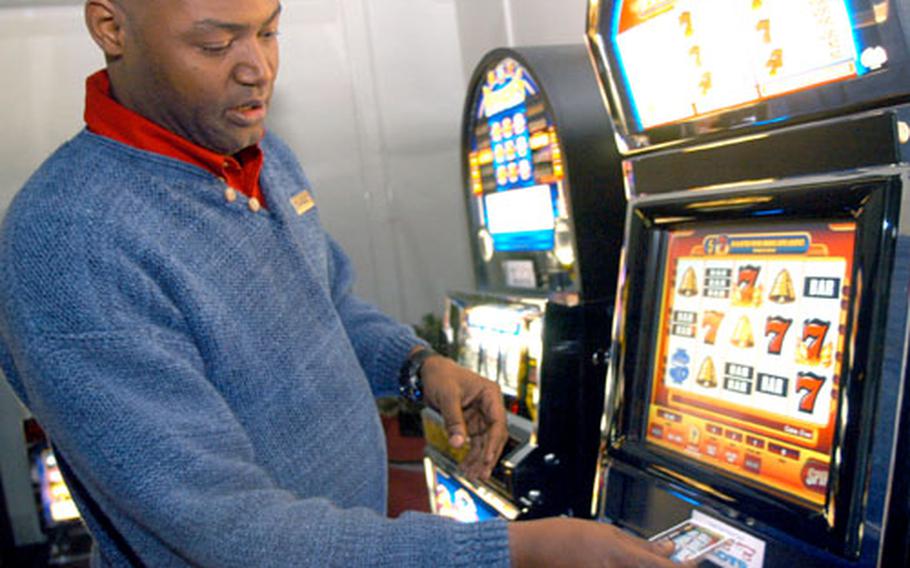 No more counting quarters or coin-dusty fingers for Jon Remmer, MWR Recreation Center manager at Naval Air Facility Atsugi in Japan. He demonstrated how to use the 28 new coinless slot machines Tuesday at the Corner Pocket. (Allison Batdorff / S&S)

&#8220;With coin machines, you have to stand and wait for all of the quarters to finish falling. Then you have to carry them over to a cashier and wait for them to be counted,&#8221; Hemming said. &#8220;Coinless machines are much less waiting and less work.&#8221;

Coinless machines &#8212; popular in stateside gambling meccas such as Atlantic City, N.J., and Las Vegas &#8212; track wins and losses on magnetic cards cashed out by a cashier or an automated teller machine. You pay money for a card, like depositing money to fund a debit card, and it quits when you run into the red. Casino cards let you choose the denomination &#8212; whatever machine you&#8217;re on &#8212; and in some cases, pick the game you want to play.

It&#8217;s a &#8220;win-win situation,&#8221; he said, because the $1 million to $1.2 million in annual profits the Atsugi machines generate help fund on-base MWR programs. Unlike other services, which send portions of winnings to MWR stateside, the Navy recycles all gambling revenues into individual overseas bases for programs and new construction, he said.

Yokosuka Naval Base, which makes about $10 million in gambling revenue, will open a newly renovated coinless casino in the Seaside Restaurant this summer.

But Kadena Air Base, Okinawa, is getting out of the gambling business by subcontracting the casinos to the Army and splitting the profits. The Army runs the slots for both the Marine Corps and Naval Forces Korea.

Yager referred to a 2001 congressional report, &#8220;The Effect of the Ready Availability of Slot Machines on Members of the Armed Forces, Their Dependents and Others.&#8221; The report outlined how slot machines in MWR facilities overseas have no negative effect on the morale or financial stability of U.S. forces, their family members or civilian employees.

Base chaplains and Fleet and Family Services provide support for those with problems, she added.