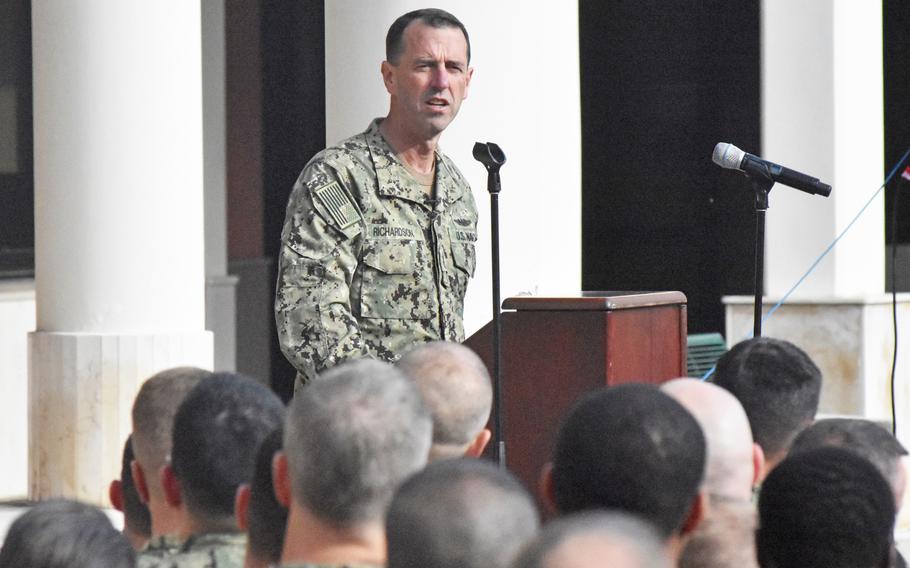 Buy Photo
Chief of Naval Operations Adm.John Richardson emphasized the Navy's role in safeguarding Europe in the face of a resurgent Russia during an all hands call on Tuesday, Nov. 21, 2018 in Naples, Italy. (Scott Wyland/Stars and Stripes)

A resurgent Russia is “challenging a lot of the system of rules and norms that have existed here in Europe and around the world for so long,” Chief of Naval Operations Adm. John Richardson said after an all hands meeting with sailors at the Navy’s base in Naples. “So it is very important that as this dynamic emerges that we learn and respond to that as a nation.”

The Navy’s 6th Fleet is key to strengthening security in this part of the world, Richardson added.

“We are entering a maritime era,” Richardson said. “The responsibilities for naval forces — the United States Navy and navies of our allies and partners — has never been greater.”

He praised the naval forces in Europe, saying they are doing “cutting-edge work” with dynamic force employment, the revived tactic of deploying in less predictable patterns.

Russia has been increasing its naval presence in the Mediterranean in the past two years in response to the war in Syria, where Moscow has deployed air and ground forces in support of President Bashar Assad. In September, Russia’s Mediterranean squadron conducted its largest exercise since the end of the Cold War off the Syrian coast.

Both Richardson and Master Chief Petty Officer of the Navy Russell Smith held a question-and-answer session with sailors, several of whom asked about personnel matters, such as promotions.

Richardson talked about how the Navy is overhauling performance evaluations to give sailors a clearer idea of how to do their jobs better.

“You are the primary audience of your evaluations,” he said. “It’s not a promotion board or a screening board.”

More emphasis will be put on character, Richardson said, rather than just competence, especially for those in leadership positions.

The Navy also is having success in recruiting and retaining high-quality sailors despite fierce competition for talent in the private sector, Richardson said. That makes the Navy a “growing business” at the right time, when demand for personnel to defend against adversaries is growing, he said.

The Navy exceeded by 18 its recruiting goal of 39,000 sailors during fiscal year 2018, the Defense Department said last week.

One sailor asked how America can strengthen bonds with allies as adversaries vie for their allegiance.

Richardson replied there are competing forces with radically different ideas about how the world should look — more controlling, disruptive, corrupt. The way to beat them is to be vocal about what America stands for, he said.

“If you think about a nation’s responsibility to make a fair and just and prosperous environment for citizens, this is what we want to advocate for,” Richardson said. “We are not the perfect guys, but we are the good guys.”