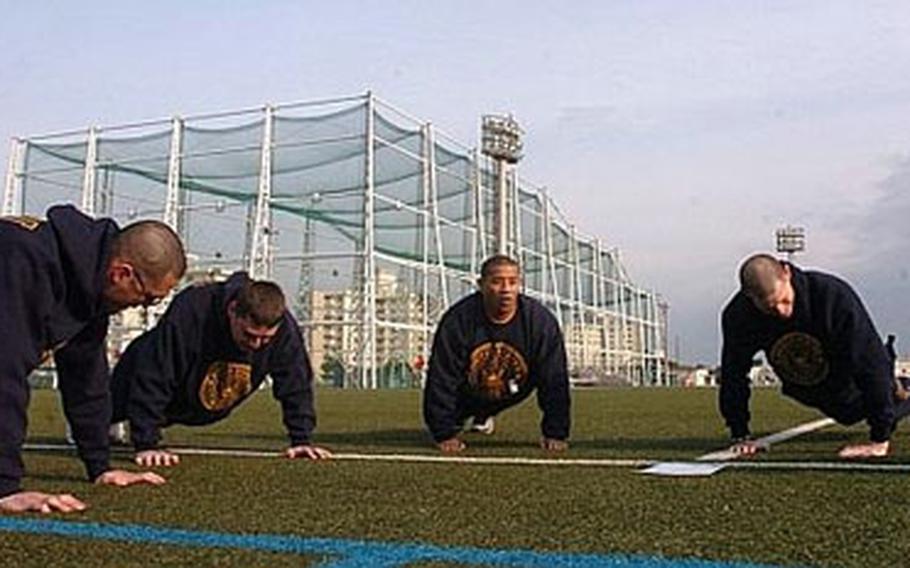 Buy Photo
Sailors from the Naval Computer and Telecommunications Station Far East work out Friday during command physical training at Yokosuka Naval Base. The Navy is considering changes to its annual physical readiness test, the director of the service’s Physical Readiness Program said last week. (David J. Carter/Stars and Stripes)

YOKOSUKA NAVAL BASE, Japan &#8212; The days of the old-fashioned sit-up could be numbered in the U.S. Navy, as leaders consider changes to the service&#8217;s annual indicator of a sailor&#8217;s physical fitness.

A top official told sailors at Yokosuka Naval Base last week that the components of the physical readiness test will be re-evaluated along several standards, including safety and applicability to everyday work.

There is no timeline for a decision on potential changes to the fitness test, but recommendations are being forwarded up the chain of command, Moore said.

In recent years, physical fitness professionals have debated whether sit-ups cause back problems, or whether people with existing problems compensate by using sit-up techniques that further strain their backs.

Many professionals instead advocate stomach crunches, which they contend put less pressure on the spine. The Navy is considering that advice for its fitness standards, Moore said.

The Navy also will re-evaluate the necessity of the sit-reach, which requires sailors to touch their toes while sitting, Moore said.

In December, a meeting of 22 Navy and civilian fitness and medical experts concluded that the current fitness standards overemphasize frontal muscles.

Concentrating on those muscles without strengthening the back and other core muscles can result in injury, Moore said.

The Navy fitness test now requires sailors to meet push-up and sit-up standards based on age and gender.

For the endurance portion, sailors can choose from a 1.5-mile run, stationary bike ride or trek on an elliptical machine.

The latter two options might sound easier, but some sailors believe the standards to earn top marks on them are unrealistic. The scores are based on the amount of calories burned in 12 minutes, instead of distance.

The scoring method will get a second look from Navy officials, Moore said.

Sailors who fail the fitness test three times in four years can be administratively separated from the service.