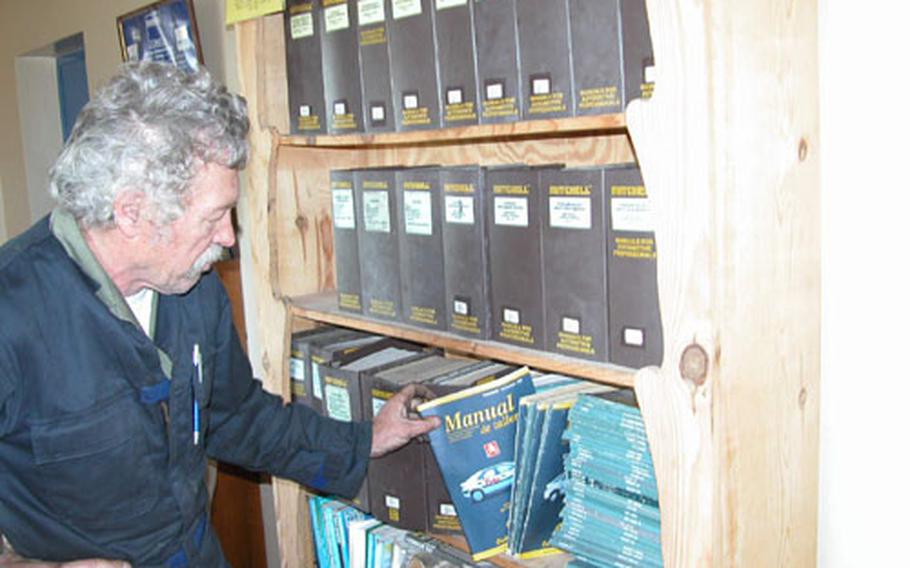 Technical manuals for hundreds of cars have been collected and cataloged by Yuri Durnovo, who has volunteered at the Auto Hobby Shop at Naval Station Rota, Spain, since it opened more than 20 years ago. (Charlie Coon / S&S)

NAVAL STATION ROTA, Spain &#8212; Do-it-yourselfers at Rota are mad that the base has closed its Auto Hobby and Wood Hobby shops.

Base officials said the closings will save $110,000 per year. The moves were made, according to base commander Capt. John H. Orem, because the base was under pressure to cut costs and raise revenues.

Both shops were closed over the weekend. Those who use the shops to work on cars and make furniture criticized the moves.

&#8220;This provides an affordable place for people to do their own maintenance,&#8221; said Petty Officer 1st Class Bill Johnson of the Naval Security Group Activity. &#8220;That apparently is wrong, because if it was right we wouldn&#8217;t be getting shut down.&#8221;

Most military bases have shops where people can work on cars and get advice from mechanics.

The Rota shop has two lifts, plus hydraulic jacks and jack stands. It has machines to mount and balance tires, compress springs and grind parts, almost any tool in the book, a clean, dry floor and good lighting.

For anyone who has ever squeezed under a car and gotten an eyeful of soot, it&#8217;s like paradise.

There are also guidebooks and other technical manuals for hundreds of vehicles.

The shops are run by Navy Morale, Welfare and Recreation. Todd Benson, the base&#8217;s MWR director, wrote in the base newspaper that the auto and wood shops &#8220;are two of the lowest utilized programs within MWR.&#8221;

Closing auto hobby shops is not a trend. The shops are open at Navy bases in Naples and Sigonella, Italy.

In Japan, Yoko Aramaki, a spokeswoman at Sasebo Naval Base, said, &#8220;there is no plan to close the Auto Hobby Shop here.&#8221; A Community Services spokeswoman at Marine Corps Air Station Iwakuni said it is &#8220;planning improvements to the services and available to&#8221; patrons. And the Web site for Yokosuka Naval Base, was advertising a &#8220;Valentine&#8217;s Day Special&#8221; at its shop.

The Army and Air Force bases in Europe haven&#8217;t shut down theirs, either.

Millie Waters, a spokeswoman for Installation Management Agency-Europe, said U.S. Army Europe has 27 auto skills centers, including at least one within every base support battalion. No auto shops within USAREUR have been closed recently, she said.

On Wednesday, eight cars were parked in the bays at the Rota shop, which a part-time employee said is open 22 hours a week and gets about 120 customers a month. The shop charges $2 an hour to use the facility and $3 an hour to use one of the lifts.

Petty Officer 2nd Class Fabian Echeverry of the Fleet Air Reconnaissance Squadron was replacing brake parts on his 1999 Honda Accord.

Next door at the Wood Hobby Shop, people were gluing, sanding, sawing and clamping.

&#8220;Why are they taking this stuff away from the people?&#8221; said Petty Officer 1st Class Bryan Noble, an engineer at the Naval Media Center, who was building a table.

Lt. Corey Barker, a base spokesman, said a sailor&#8217;s or Marine&#8217;s cost of living adjustment already takes those costs into account.

Barker said that people should not be scared to take their car to a shop in town where the mechanics speak only Spanish.